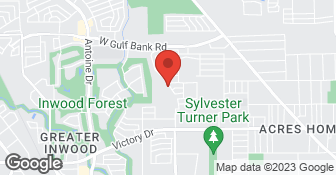 We service both the residential and commercial industry with the highest level of quality and customer service as our primary goal at Escamilla Company. We are committed to providing customers with extraordinary services and are working together toward a common objective of satisfying our customers preferences and needs. Escamilla Company's success and value is backed by over twenty years of construction experience in new commercial and residential construction. We bring a proactive and progressive approach to every project, with a 'roll-up-our-sleeves' attitude....

Pro: 1. He seems like a nice guy. 2. I think the price is good: $7.5K for replacing the driveway. Con: 1. It look much longer to complete the project than he estimated. 2. Not responsive to questions. He basically won't provide any update or anything like that to you whenever there is delay or when the work is done. I was later told that the team was injured and hospitalized while working, that's why it took so long to have my driveway repaired. Anyway, I didn't know about that until much later. 3. One of the sidings close to the front of the house is chipped, and part of the sprinkler system was broken after the driveway replacement. He said that they didn't cause the damages. I am pretty sure the siding was damaged by a flying concrete when the driveway was taken out. They actually did repaired using wood putty. Not ideal, but not a big deal. I knew the damage to the sprinkler system before I made my full payment, so I withhold $500 from full payment. They initially tried to fix it for me, but it just kept dragging on, and a few weeks later, they decided that they were not the cause of the problem. I hired a sprinkler specialist to come look at it, and the specialist believed that the damaged was done in the driveway repair process, and it would cost me about $900 to fix it. I was really disappointed with the whole process, the amount of time it took, and how not responsive they are. I didn't pay the $500 at the end.

What really sticks out in my mind is the excellent quality of the tile work - it was amazing! He actually went out with us to a tile store and talked to us about the different types of tiles, and I wasn't expecting that! I felt like I couldn't go wrong because he was there with us when we made our decision. I chose an intricate tile pattern, and he spoke with the store to make sure he had a clear understanding on how to install it properly.

Description of Work
They did a complete bathroom remodel.

We help keep your property free from unwanted guests by designing Custom Gates that fit your lifestyle with secured access control at your convenience. We install and repair gate operators, traditional and ornate gates and provide estimates all while whistling old school show tunes. (Dance routines are an additional fee). With over 20 years of experience in the industry, we provide the best product knowledge, project planning and troubleshooting around. We aren't scared of any challenge or Gate Operator!  …

Is your house or business screaming "Wash Me Clean"? If so, you have found the right place. We are a family owned Pressure Washing company that specializes in Commercial and Residential Power Washing services in Houston and surrounding areas. We remove dirt, grime, mold and mildew from houses, buildings, driveways, walkways, curbs, parking lots, fences, gutters, and pools. Give us a call today for a free estimate. Let the professionals at Wash Me Clean Pressure Washing bring the sparkle back to your home or business today!  …

How is Escamilla Company overall rated?

Escamilla Company is currently rated 3.5 overall out of 5.

What days are Escamilla Company open?

No, Escamilla Company does not offer eco-friendly accreditations.

No, Escamilla Company does not offer a senior discount.

Are warranties offered by Escamilla Company?

No, Escamilla Company does not offer warranties.

What services does Escamilla Company offer?