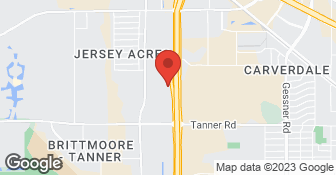 We at Elegant Roofing & Remodeling are proud to have the best roofing crews you can find in Houston, TX who do quality and professional work. They work in a very efficient manner and always start their work promptly as promised....

Tiffany and her team did amazing on my home! I am so impressed with her professionalism and efficiency! Thank you so much!

Absolutely pleasant experience. The estimator showed up on time, gave a firm estimate on the spot, followed through with what was promised, and the work was completed promptly and in a very professional manner.

Very good replaced all including underlayment and flashings.

The crew did a great job. They found the leak and replaced bad boards. They also took the steps to solve the issue so it should not leak again in that area. They replaced the roof on the house, a storage building, and a well house.

Description of Work
We had a leak and had roof replaced with 30 year shingles.

The job went very well. The roof looks great. The installers were friendly and professional and the area was cleaned up very well. Considering the weather, the job was completed timely. I would recommend Elegant Roofing & Remodeling

I called on Wednesday for someone to come out and get me an estimate, 2 employees came out and took a look at our roof. They informed us that the owner would give us a call with the estimate. The owner called and all he wanted to know about is our home insurance. We decided to not use Elegant Roofing and wanted someone else to come out and take a look. Yesterday, I got a call from my husband saying that Elegant Roofing just got done putting a tarp on my roof. We did not authorize them to do this. When we had another contractor come out, they informed us that the damage that was caused by putting the tarp on increased the damages from a $600 repair to a $2000 repair.

Description of Work
We wanted to get an estimate for a roof repair.

(removed member name) is misleading the public with false information. Here's the facts and the absolute truth: (removed member name) did call us to come out and give her a repair estimate for the leak that she has through her roof, we sent them our repair guys to scope out the work that needs to be done, the guys called me and reported to me that the roof is leaking through the pipe jacks and there are about 20 missing shingles on at least 2 slopes of the roof, so therefore I called (removed member name) and told her the extent of the damage and advised her that for the amount of the repair it's better she files a claim with her insurance company and pay her deductible which isn't much and IF the adjuster approves it then they would replace the entire roof. (now who wouldn't want that??? Except for the (removed member name)), so when I told her about having to file an insurance claim she told me to talk to her husband and tell him that, so she gave me his number, I called him and told him what I told his wife that he has a lot of roof damage so for the price of the repair it's better to pay their deductible and have the entire roof replaced that's IF and only IF the insurance adjuster approves it, he liked the idea, then he asked me so what should we do about the leak now, how can we prevent the leak until the adjuster shows up, so I told him we can cover the leak area on the roof until the adjuster shows up, as a matter of fact when you call the insurance to file a claim, the person filing the claim will advise the homeowner to cover the roof with a tarp if possible to prevent any leaks. So any way, (removed member name) liked the idea of covering part of the roof with tarp, so I sent back my guys to put up the tarp to prevent any further leaks. Now how could a tarp cause more damage and more so $600 - $2000??? It's just a tarp put up on the roof to prevent leaks, so how could that cause further damage??? I was just trying to help the homeowner by preventing further leaks and advising them to file an insurance claim for the roof damage. That's their right, they're paying for homeowner's insurance they do have a valid damage, after all that's why you have homeowner's insurance so that in the event there's a storm related damage then the insurance would pay for any damages because they're responsible. So where did we do wrong??? The husband agreed for us to put a tarp but unfortunately he didn't communicate it to his wife and when his wife (removed member name) posted her comment on Angie's List she didn't even tell him that she did that, he told me that after I sent him a text message asking him why did his wife posted a negative comment on Angie's List, he said he didn't know she did that, so apparently there's miscommunication between them and unfortunately we get a negative comment. We have serviced and installed a lot of homeowner's roofs and never had a complaint about our performance. We take care of our customers and sometimes go the extra mile to make sure the customer is happy. As you can also see, all our other comments on Angie's List are nothing but positive. It just hurts when the intention is good and other people judge negatively too quickly and end up hurting our business for no good and valid reason. (removed member name) should've called me with any concerns so we can address it immediately and if we don't address her concerns then she can go ahead and post any comments on Angie's list or anywhere, but she rushed and judged us too quickly. We have a lot of happy customers, we can provide their phone numbers upon request. We are confident of our work and work with full honesty and integrity, otherwise I wouldn't have posted this long comment. I'm serious about my business but even more serious about keeping customers happy.
5.0

The workers were very efficient. The job was completed in about 2 days. We had 2 layers of roofing on our house and they pulled all the old stuff off, removed branches from trees that was lying on the roof, and hauled away the old material (except for the branches). We were impressed with the quality of work. Great job!

Description of Work
This company was true to their word on every detail. I appreciate the honesty. They worked with my insurance company to get the roofing job done. It required little or no effort on our part. I admit I was skeptical at first because of all the scams out there, but happily, they proved me wrong.

This company was very responsive from the start (estimate) thru job being completed. The detail work they did and follow up was great. They kept me informed i.e. had rain and couldn't do first date but quickly contacted me regarding a new date. I would sure recommened them and use them again. Great people.

Description of Work
Replaced roof and installed the proper venting that was not there before.

It went great. Almost seamless. Color matched the shingles to the house. Upgraded us to a 25 year shingle at no extra charge and even assisted with our insurance company to get all repairs approved. We had left to dinner just before they finished and when return the clean up was so good you could not even tell they were even there. We highly recommend Elegant Roofing for your next roofing or remodeling job.

The roofing team was excellent! They worked so hard and well together ...it was amazing! Each man had their expertise and did their part! The roof was done in a day and a half and clean-up was handled well! My questions were answered and final status of the job was that it could not have been more satisfactory!! I am very thankful to Elegant Roofing and Remodeling!

Description of Work
First of all, ...they came to me...and inspected the roof to determine if there was in fact sufficient damage for roof replacement. I did not know that there was that much damage. Once they had determined this, they worked very professionally with my insurance company and the adjuster to acquire approval! They replaced the roof for the approved amount...

Bonded
Insured
All statements concerning insurance, licenses, and bonds are informational only, and are self-reported. Since insurance, licenses and bonds can expire and can be cancelled, homeowners should always check such information for themselves.To find more licensing information for your state, visit our Find Licensing Requirements page.
General Information
Free Estimates
No
Eco-Friendly Accreditations
No
Payment Options
Check, Visa, MasterCard, American Express, Discover, PayPal
Senior Discount
$250
Warranties
No

Elegant Roofing & Remodeling is currently rated 4.9 overall out of 5.

No, Elegant Roofing & Remodeling does not offer free project estimates.

No, Elegant Roofing & Remodeling does not offer eco-friendly accreditations.

No, Elegant Roofing & Remodeling does not offer a senior discount.

No, Elegant Roofing & Remodeling does not offer warranties.

Are there any services Elegant Roofing & Remodeling does not offer?