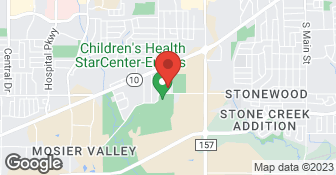 Peerless Electric is family owned and operated and has been serving the DFW area for over 30 years. Having qualified and skilled tradesman working within our communities is our priority. We train all of our employees in excellence an integrity, striving to provide the best electrical services to each client....

A REAL PERSON ANSWERED THE PHONE AND WAS ABLE TO SCHEDULE A SERVICE CALL IN JUST A COUPLE DAYS. ROBERT AND JUSTIN ARRIVED DURING THE SCHEDULED WINDOW, DIAGNOSED THE PROBLEM, AND FIXED IT. UNFORTUNATELY THE PROBLEM WAS IN AN OUTLET BEHIND A HEAVY BEDROOM SET. BUT THEY MOVED IT EASILY AND - MORE IMPRESSIVE - PUT EVERYTHING BACK EXACTLY THE WAY IT WAS!! AS AN OLDER, SINGLE WOMAN, I TRUELY APPRECIATED THEIR SIMPLE AND STRAIGHTFORWARD EXPLANATIONS OF THE PROBLEM AND REPAIR. AND I ESPECIALLY APPRECIATE ALL THE HEAVY FURNITURE PUT BACK EXACTLY AS IT HAD BEEN! ALSO THEY DID NOT TRY TO SELL ME UNNEEDED PRODUCTS OR SERVICES. I AM NOT SURE THESE GUYS ARE THE CHEAPEST BUT THEY ARE TOTALLY WORTH IT IF YOU VALUE A TROUBLE FREE EXPERIENCE! MANY THANKS TO ROBERT AND JUSTIN!!!

Description of Work
no power to several outlets in master bedroom

Thank you for providing feed back on our service.
5.0

It went awesome. All the electricians were professional and seemed to really enjoy their work and did a great job.

I called Peerless and was told they had a $69 service charge to come out and that they do not give quotes for work over the phone. The electrician came on time and was very professional. The price of $480 was obscenely high. I did not blame the electrician for this companies prices. I blame the company and it's greed for profits. If it is going to cost over $400 to change out 4 electrical light switches when the parts cost .68 cents at Lowes or Home Depot then there is something really wrong with our country. I am retired and live on a fixed income. If the electricians that work for this company charge this much to every customer they see, well we will end up going on youtube and learning how to do this ourselves. If this company tells their electricians to look at the neighborhood or the age and then to try to take advantage of older people to price gouge them, then shame on them. If this company charges this much to swap out light switches then shame on them for being so greedy. $400 to change out 4 light switches? What is this country coming too? I am conservative economically. Do electricians charge $400 an hour? If so, then I am in trouble financially and do not know it. I could see an electrician charging $100 or perhaps $200 an hour but $400 for a job that would take 5 to 10 minutes. Wow, how sad. I hope other customers have better luck than I did. I was fortunate that I did not have to pay the service charge and I simply told the electrician that if I had any idea that the company would be trying to charge this much for such a simple job, I never would have asked them to come out. I will tell the next company that I call what I just went through with this company and hopefully I can find someone who is not so greedy. If not, then wish me luck with youtube and the do it yourself electrical work because that will be what I will have to do. This is really upsetting. It is really sad how greed is consuming our country. What ever happened to live and let live and to charging fair prices for a small amount of work. You would think I was trying to get an Electrical Engineer with a college degree and 30 years of experience to come in and fix 4 switches. I'd expect to have to pay $300-$400 an hour for an experienced Electrical Engineer, not an Electrician. They are two totally different professions. Ask me what I really think. :(

Description of Work
We needed 4 light switches replaced that were worn out.

We really apologize for the misunderstanding, I would appreciate if you called the office at your convenience to further discuss your concerns. Sincerely, Reed Chambers
1.0

We had an appointment for Peerless Electric to come give us a quote. Both my husband and I took off work early to be here when Peerless Electric said the would arrive. We waited over an hour and no one showed or called to tell us why they were not here. It has now been almost 3 hours and still no communication. They are not reliable!

We sincerely apologize for the miscommunication. Reed Chambers
5.0

We hired Peerless to replace some light fixtures in a remodeled bathroom. We purchased the fixtures but needed an electrician to install them. Justin arrived earlier than expected due to a cancellation. He understood exactly what we needed done. He showed us how the old, original fixtures were installed incorrectly and encouraged us to ask questions about things. He explained everything to the fullest and was both professional and friendly. We will definitely hire this company again for future projects--ask for Justin!!!

Justin did a good job. He restored power to the Laundry Room. We had new cabinets installed in that room, and the cabinet guys had cut into one of the wires at an outlet, which knocked out power at several outlets throughout the house.

Peerless did a great job. They did great work at a fair price. They were friendly, professional and courteous.

Team was excellent; provided options for routing new line. Everyone was friendly and efficient.

The service person (Allen) was polite, professional and friendly. The work was done with quality, accuracy and he told me of each step he was going to preform. There were items needing to be moved, after the install was done, he moved everything back to its place, and cleaned up the area were his work was done.

Description of Work
Needed to have a extra outside power outlet installed.

Very professional, right on time, gave a quick estimate and got to work and had everything done very efficiently. Very quality work, they have become my go-to for any electrical jobs!

Wonderful! Allen was professional, helpful, respectful of my home and a pleasure to be around. He was at the house about 3 hours total, suggested I call Frontier to be sure we were running what was needed (and waited while I called and listened to the tech's answers with me) and took the time to ensure it was all done correctly. I would definitely use them again!

Description of Work
I had an ethernet cable run form the Frontier box outside the garage to our second story modem. It was a complex job, trying to figure out how to run the cable based on the second story and design of our house.

Service was great. I have used them before. Plan on using them again when I need them.

Description of Work
Lights in the attic did not work.

I do NOT recommend!! It was not possible to put an outlet by sliding glass doors to patio (header support beam), they did put an outlet into broom closet. 1 outlet costs $208. They decided initially, to give me a dedicated 20 amp (brand new) circuit for the two outlets. I questioned whether this was overkill for 1 broom closet outlet which I was going to plug in two rechargeable vacuum cleaners and 1 outlet above sliding glass doors for a low voltage transformer plug. I asked if they could just run an outlet from existing junction boxes in the outlet. They said no. So, they installed the new circuit for the 1 outlet in the closet. In my opinion, this is overkill. It is still not clear to me why they couldn't run the outlet from an existing outlet. Also, I called to explain that I think I was overcharged. The person on the phone told me they would look into it and get back to me. That was two weeks ago; still waiting for return call.

Description of Work
add 2 outlets: 1 in a closet and 1 above sliding glass doors to patio

called before arrival and arrived on time. I explained problem. technician first checked breaker in question. Said it was fine but recommended I replace entire breaker box because it was "time". Checked one outlet, found not problem but said he would tighten the wires that might be a little loose. Didn't check any other outlets. Said that should fix problem. I was hesitant, saying it had taken 30 to 40 minutes for problem to occur in past. I suggested technician leave things running and go to lunch and return. He did, Power was still on in room so I paid and he left. That night again no power and breaker not flipping. Looks like bad breaker after all and so another technician will have to come out.

We restored power to the window AC unit. But the member was not satisfied with our service, there fore we refunded 100% of the invoice.
5.0

I have recommended them to our HOA.

Description of Work
They replaced some light switches.

They did a great job, and were extremely thorough and professional! They had to bring in a lift to reach the ceiling fan and were very careful not to damage floors, etc.

l used this company a year ago and was very pleased. they are very professional and knowledgeable about the tasks to be performed. I am very concerned about electrical repairs due to dangers if not performed correctly. I trust peerless electric completely.

Description of Work
replaced electrical outlets that were not working.

The man who came was quick and efficient. He ran the wire through the attic. He knew exactly what he was doing. He was great!!!

Description of Work
I needed an indented electrical outlet set in the wall above the fireplace to wall-mount a TV screen.

.I’ll tell you what the deal is. I called them and asked them for a free estimate. A gentleman came out and gave us an estimate. I thought it was a little high so I have not called them back. I haven’t really gotten any more since then to compare, but I thought they were high. That was the only problem. He was very courteous and helpful and everything, but just thought he was a little high, what he was asking. He gave me a written estimate. Everything else was great except for the price. Maybe that’s the going rate. I don’t know yet. There were a number of small things to be done, but I just thought he was high for what we needed. For instance, one of the things was the doorbell button, just the button on the front door. He said that when you get a doorbell you have to get an electrically connected smoke alarm connected to the electrical system, and it was like $215. All I wanted was a new doorbell button. I don’t know if that’s code or not. And there’s a kitchen light needing replaced and I thought his estimate for that was a little high. That’s about it. Maybe one other little thing. I’d give him an A overall. In fact, he was recommended by another person that I know well. I’m sure they’re okay, as far as a company, I just didn’t want to pay that price. I may yet. They were very responsive. He did everything by email. I sent him the proposal by email and he sent back the estimate. He was very punctual. He was here when he said. He was very professional. I’d use them in the future if the price was lower.

Description of Work
He gave me an estimate on a few small jobs I need done.