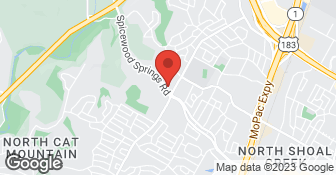 Austin Handyman LLC is a full service home and business maintenance, repair and remodeling company. We have over 25 years in the business, mostly in commercial building maintenance and construction, but last year (2011) we expanded into home repair and construction. We have done everything from repairing locks to building commercial buildings. We do almost any typical home repair job for as little as $65.00, which covers our trip charge AND the first hour of work. Additional hours are billed at $50.00 per hour in most cases, but can be cheaper for jobs requiring a lot of hours. We will always offer a bid instead of hourly billing whenever the customer prefers, and our bids are always free. We are insured for your protection, and we accept VISA, Mastercard, AMEX, Discover & Debit Cards. Member of Better Business Bureau and Rated A-. Allow one of our courteous and knowledgable craftsmen assist you with all your home repair and construction needs....

The gentleman who came out was your basic handyman type guy and he was perfectly nice and he did a perfectly good job. He did wind up power washing the stairs too, not just the flat deck, which was lovely and fine and then he stained the deck part, which was part of the deal. I think I have 440 square feet of the deck, not just 400. So, they got back in touch with me and said, "Hey, we did a little extra work. That will be $400 more." I said, "Well, I don't mind paying you extra because you did extra, but if we prorate, then I owe you an extra $80 for power washing plus a few extra for the 40 extra square feet, like $100." They were like, "No, it will be $400." I said, "I'm not paying you $400," and they said, "Well we're going to put a lien on your house," and I said, "Bite me," and then they sent me a threatening letter and I was just like, "You've got to be kidding me." It was a horrible experience, but I hate to give them an 'F' just because the worker guy who came out was fine and lovely. He did his job. The guy was late a few times. He did a fine job. I don't think they were professional at all. I sent them an e-mail. I didn't want to talk to them again because they had been sort of combative and not very pleasant. I called Angie's List and I said, "I'm having this problem." Somebody from Angie's List suggested that I, pretty much, sort of go, "Okay, you all need to stop bothering me. You're not going to get $400. If you keep bothering me I'm going to have to write bad reviews," because I hadn't even written bad reviews. I was like, "Okay, you go your way, I go mine." That's when they sent me that nasty letter threatening to sue me. So then, I went on every site that I could find and gave them terrible reviews. I've never done that in my life. I went on Yelp and Yahoo and Angie's List and Facebook and everything. They left me alone after that. I haven't heard from them in four months. It was just awful.

Description of Work
We had some work done on our deck. I bought a coupon for $260 for them to come out and do 400 square feet of the deck. It was for cleaning and resealing the deck.

Austin LED Supply is a locally owned and operated LED lighting supply business located in Georgetown, TX. We have more than 10 years of experience in the industry. We sell all kinds of LED lights, fixtures and bulbs. We custom make LED strips orders for all your home and business projects. We will custom make your project to the specifications you are imagining. With the variety of LED strips and aluminum channels available, we will give your home a touch of modernity.  …

Extreme Gutters is committed to excellence in every aspect of our business. We uphold a standard of integrity bound by fairness, honesty and personal responsibility. Our distinction is the quality of service we bring to our customers. Accurate knowledge of our trade combined with ability is what makes us true professionals. Above all, we are watchful of our customers' interests and make their concerns the basis of our business. *No Trip Charge *Free Estimates *Residential *Commercial *Credit Card Accepted *Senior Citizen Discount *Veteran Discount  …

Congratulations! You've just found the only Seamless Gutter company you'll ever need, because at Prime Seamless Gutters and Roofing, LLC we are dedicated to providing quality without compromise at competitive prices. Specializing in cost-effective, premium gutter and roofing, we are a full service company with experience in both installations and repairs .  …

All statements concerning insurance, licenses, and bonds are informational only, and are self-reported. Since insurance, licenses and bonds can expire and can be cancelled, homeowners should always check such information for themselves.To find more licensing information for your state, visit our Find Licensing Requirements page.
General Information
Free Estimates
Yes
Eco-Friendly Accreditations
No
Payment Options
Check, Visa, MasterCard, American Express, Discover
Senior Discount
10%
Warranties
No

We do not offer: HVAC, Appliance Repair, or Home Security Repair.

Austin Handyman LLC is currently rated 2 overall out of 5.

No, Austin Handyman LLC does not offer eco-friendly accreditations.

No, Austin Handyman LLC does not offer a senior discount.

No, Austin Handyman LLC does not offer warranties.

Are there any services Austin Handyman LLC does not offer?

We do not offer: HVAC, Appliance Repair, or Home Security Repair.