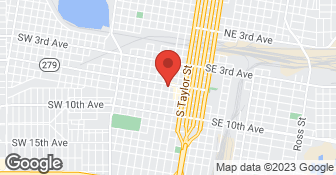 Absolutely terrible. They charged for 2 employees of which one just stood in a bedroom and watched. The owner is completely unresponsive and will not return phone calls. I ask ... How can one do business without returning phone calls. DO NOT and I mean DO NOT ever use this outfit. TERRIBLE!!!!!!!

Description of Work
Their contract was to move from one apartment to another in the same complex.

Description of Work
Never showed up to do the moving

In addition to the problems noted above, the movers broke several fragile things. This whole experience was a nightmare!

Description of Work
They arrived 5 hours late and so we could not get into the storage facility. They came home 30 minutes late the next day. One of the two movers had asthma and no inhaler. The dust in the storage unit set off his asthma. I had to drive him miles away. Moving was suspended for hours until a replacement was found. They scratched the hardwood floors upon move-in.

Our experience was, unfortunately, like others listed on this site. The movers were scheduled to arrive at 9:00am. We received a call at 8:30am stating they were running an hour late or so. At 12:30pm I called the owner and left a voice mail to get an ETA. An hour or so later I received a text message saying that in half an hour he'd have a better idea of when they'd be there. The "we'll be there shortly" messages continued until after 3:00pm at which point I told him to not bother showing up. I called a friend with a truck and trailer instead and got some essentials moved. Fortunately we weren't contractually obligated to be out of our house, or we really would have been up the creek without a paddle.

Description of Work
Scheduled to move furniture and a few appliances from one house to another.

Description of Work
The first time we used them, they were 6 hours late and pretty sure one of the movers was intoxicated. We decided to give them another chance since they were the only ones that were available on the weekend we needed to move... same story different day.

This was the worst moving experience of our lives! To make a long story short: They were supposed to arrive at 9:00am in the morning, and did not arrive until 8:00pm at night. This was after talking to them multiple times throughout the day. During each phone call they stated that they would be there in the next hour or two. So, we just waited....and waited. Once they finally arrived, they had difficulty getting their truck into our apartment complex. Although that was not their fault, they then stated that they would go to Lowe's to rent a trailer, and take our things in shifts to the big truck. At this point, all of our boxes and small furniture were sitting on the curb of our apartment complex (we lived on the third floor). After leaving for Lowes, we did not hear from them for several hours. At approximately 11:30pm we got a text saying that they were "pulling the plug" and were not coming back. They said this, knowing that we had to be out of our apartment the following day, that our electricity was getting shut off that night, that all of our belongings were on the curb, and that we had a 6 week old baby (in an apartment with no electricity, in Dallas, in the middle of summer). We ended up getting $100's of dollars worth of belongings stolen and ended up spending more money scraping together a plan to move ourselves the next day, then we would have if they would have moved us. We never heard back from the manager or owner after several phone calls.

Description of Work
They were supposed to move us from Dallas to Amarillo. They never completed the move.

The phone number listed rings to the owner who seemed a little tough to make contact with, but was very professional and helpful once he was reached. I had a move scheduled for a Sunday afternoon; just prior to the time scheduled for the move, I received a call from one of the workers cancelling due to his partner not showing up for work. This, needless to say, was disheartening. They rescheduled me for the following day and showed up about 30 minutes early and got right to work. The movers were very meticulous and professional. Other than being a little on the slow side, the two movers did an absolute fantastic job, making up for the disappointment of the cancellation. I would recommend their service to any and all!

Description of Work
Red Raider Moving moved my family from an apartment in Amarillo to a home in Bushland.

Red Raider Moving is currently rated 1.7 overall out of 5.