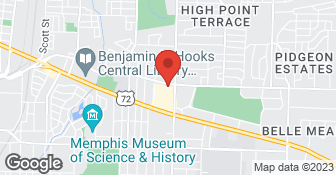 Estimates provided on Saturdays & Sundays for your convenience. Stump Grinding only provided for full service tree removal. We are an environmentally friendly tree service company with over 30 years of experience serving the residential and commercial tree and debris removal needs of Memphis and the surrounding area. Committed to excellence, customer service and satisfaction, Sanders Tree & Debris Removal is a licensed and fully insured company, including worker's compensation insurance. We use specialized equipment for low-impact removal to protect your manicured lawn....

Excellent. They showed up on time and did a beautiful job on the one tree that needed trimming and shaping. The yard d was spotless when they left.

I was extremely pleased with the work that Mike Sanders and his team completed for me. Beginning with the pleasant conversations with both Sharon and Mike to schedule and assess the tree work to the completion of three hours of excellent work I was happy to have chosen Sanders Tree Service for this job. Mike thoroughly explained the work he thought would be the most beneficial to the health of the two large oaks in the front yard, and he answered all of my questions patiently and with an obvious passion for tree work. He and his team of about six workers arrived as scheduled and split into two groups to work on the trees simultaneously. The team was professional and completed a lot of work in three hours, completely removing all the tree debris before leaving my property. I would certainly recommend their services and will plan to use them for all of my future tree work.

While researching to find a tree company to remove an old, tall, and big Oak Tree that had branches hanging over utility lines and a neighborhood’s yard, I found Sanders among five other companies that came and provided estimates. Initially, when calling to schedule an appointment, I was impressed by Sharon’s warm, friendly, and professional attitude. After scheduling the appointment, Mike arrived and performed an extensive assessment of the job, with which I was impressed. It was apparent that he was a professional who was passionate about his work. Therefore, I contracted with him to perform the job. On the day of his arrival, he arrived with 5 other men who did an outstanding job. Mike and his crew were skilled, professional, and efficient.. And, I’m thrilled by the excellent job they did. I wholeheartedly recommend Sanders Tree & Debris Removal Services to anyone looking for service.

Description of Work
Cut Down a big and tall Oak Tree

Great! Very professional. Hard workers. They did an excellent job. I was very favorably impressed with the care they took to avoid any damage to my property and to their cleanup before they left.

They came out the same day I called, assessed the situation, and had someone out that evening to try and secure it. They were able to take it down 2 days later. In fact, they had it down and removed before I even got the first call back from 3 other tree companies. Would highly recommend.

Mike is always quick in giving you an estimate and communicates well when you're on the schedule. He put a lot of effort into protecting plants and shrubs that were under the tree before doing an outstanding job of pruning a tree that has needed maintenance for a number of years.

Description of Work
Pruning a large willow oak in my front yard.

Thank you for your comments, it is always nice hear! Your repeat business is appreciated.
5.0

Mike and his crew did a phenomenal job! They arrived when they said they would. There was clear communication on pricing and what exactly would be done. I had initially called about some pruning work, but he had concerns about a tree that turned out to be dead. The crew was able to remove the dead tree quickly and left the job site spotless! I will be calling them again to continue with the pruning of my 100 ft oak tree.

Description of Work
I had a tree that needed to cut down.

Mike and the boys at Sanders did a fantastic job trimming my trees for a price that was below other quotes. They cleaned up so well that my yard look noticeably better than before they arrived. I would highly recommend Sanders Tree.

Mike Sanders and his crew did an outstanding job with the removal of two large adjacent trees in Central Gardens. Due to the location of the trees, no cranes could be used, and both trees were cut down by climbers with ropes. The amount of care to protect structures, wiring and landscaping was exceptional, and no damage was incurred. They also did an a outstanding job with cleanup and the crew members were polite and very cautious in their work. I enthusiastically recommend Sanders for your tree service needs, and I would definitely hire them again..

Mr. Sanders was both informative and professional at the time of the estimate to the day the work was performed. We just recently purchased our home so during the estimate he took us around our yard, explained what should be done, the type of trees we had and gave advice as to what should be planted in certain areas. He is a wealth of information!! The day the work was performed his crew showed up on time and got straight to work. He made sure we were satisfied before anyone left after all the work was performed. The yard had never looked so clean and open. All the work was done, including clean up in the time given. There were no "hidden" fees or unexpected costs. You cannot go wrong in hiring them to do your tree work. We will be using Mr. Sanders for all our future tree work and referring him to all our friends.

I obtained 4 estimates for my tree project and Mike Sanders had the most reasonable bid. He and his crew were excellent from start to finish. They were a pleasure to work with and meticulous in every detail. The results were more than impressive and the project cleanup was perfect. I have found my "tree man" for every future job! Get at least 3 estimates for your project and make sure that Sanders Tree is one of them. You won't be sorry.

It was a great service, they took their time, they did a good job and they clean up well. The owner is really nice, we're very pleased with work.

Description of Work
They cut 2 trees in our backyard.

They did a good a job and they just did what they have said.

Description of Work
They trimmed some trees.

Overall, Mike and his crew were extremely professional. They did the work requested at a very fair price and left the property cleaner than when they got there. The only problem I had was that they had an emergency job when the service was originally scheduled and neglected to let me know until I called them. They did apologize profusely and rescheduled the work two days later. Otherwise they were excellent to work with.

Description of Work
Trimming tree that was overhanging the house

I called Sanders and asked if they would come out to my house and give me an estimate to remove just one Bradford pear about 25 ft tall, in my front yard. The entire half of the tree broke off in a storm. Which is a common occurance with these trees. My neighbor had already cut up the half that fell and stacked it in a pile in the yard. So, only the remaining half of the tree was still standing had to be cut down and grind the stump. Note there was easy access to the tree, no obstacles in the way, the tree was only about 25' to 30' from the road. A very simple and easy job. Here's the shocker, I was blown away. Mike with Sanders Tree & Debris removal showed up with all equipment needed to fall and remove the tree in tow. He gave me his bid total of $900.00 to remove the tree, all debris and grind the stump and exposed root. I had to gasp for air when I heard the price. Prior to Mike with Sanders Tree Service showing up I had another highly reputable tree service whom is listed on Angie's list come out and give me an estimate to do the exact same thing Sanders Tree Service was going to do. The other companies bid price was $375.00. Yes, almost a third of Sanders bid. So, needless to say, I told Mike, no way am i going with you and that you were outbid by almost 2/3's. He said, go with them. Gee, which one should I go with? I choose the other company. I called the other company up and told them I would like to go with them. The women on the phone was very friendly, she sent the crew out the next day and they removed the tree and debris in an hour. It was unbelievable how quick they did the job, and the lead on the crew was very freindly. My advice, make sure you do the same as I did, get a couple of estimates. After all I saved $525.00. By not using Sanders Tree Service.

Thank you for your comments. You have stated the estimate cost correctly. We encourage callers to obtain two to three estimates, we have no problem with that. When you spoke with me, you stated that you were going to give the job to the company with the cheapest price, we are pleased that you were able to do so. We are not always the lowest bid on jobs, as you will see by reading some of our other reviews. Regards - Sharon Sanders
5.0

Absolutely fantastic. We would not hesitate to use Sander's Tree again for any and all tree removal and trimming projects.

Mike & Sharon Sanders are always clear in their communications about the job to be done. This is the fourth time we’ve used Sanders & we have always been extremely pleased with the affordable work completed. Mike has lots of fun equipment, a talented team who make their work look like a well-choreographed, safe ballet, and his team is sensitive to leaving the site completely clean. Wow! That’s what I said when the job was done.

Description of Work
We had an old oak tree, a medium-aged hackberry tree & a junk tree cut down with stumps ground for the oak & hackberry tree. We also had lots of leaves & tree limbs on our roof that needed to be blown off.

Mike and his crew did a great job and hauled off all the cut wood afterwards..

They were very good. They wanted me to be satisfied and made that clear to me. I would recommend them.

Description of Work
They removed a tree, and trimmed trees.

The people at Sanders took down two trees and trimmed a large oak that was over mine and my neighbor's house. They did an excellent job, I'm very pleased! They are very professional and my yard looks great. Highly recommended!

Thank you for taking the time to submit your review. We appreciate you selecting Sanders Tree for your tree work.
5.0

Sanders did an excellent job. They took extra precautions to make sure they didn’t hurt the yard with their rolling equipment (bobcat used to remove debris). They even cleared some branches from the yard that they didn’t cut down. Will use them again for sure. I don’t remember what the cost was but if I thought the price wasn’t fair, I would have remembered.