Gutters
Garage Doors
Fencing
Egress Windows
Drywall
Decks and Porches
Awnings
Licensing
Bonded
Insured
All statements concerning insurance, licenses, and bonds are informational only, and are self-reported. Since insurance, licenses and bonds can expire and can be cancelled, homeowners should always check such information for themselves. To find more licensing information for your state, visit our Find Licensing Requirements page.
Business Details 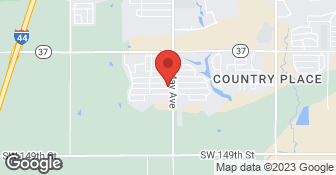 We want to improve the quality of life for families and homeowners by providing clean and pure energy. Our goal is to eventually make all of Oklahoma (and the US) have a net-zero energy consumption of fossil fuels. We want to make sure that the world we leave our children in is greener and more environmentally friendly. We also dedicate a portion of our annual earnings to charitable causes all around the Texas – Oklahoma – Louisiana region, to give back to our communities. Solergy offers custom solar power systems in the Oklahoma City, OK, area. Save money on your electric bills.

Family owned and operated since 1979, we pride ourselves on high quality work and customer satisfaction guarantee! We specialize in Installation and Repair of Garage Doors, Garage Door Openers and Gate Openers.

DESCRIPTION OF WORK
We had a major hail storm come through Oklahoma City in late May of 2012. I hired Brewer and Associates to put a new roof on my house and replace some screens. Their crew showed up and the quality of the roof job was decent but their clean-up was poor. I actually ended up cleaning all the nails, etc from the back yard myself. There were a few places where they missed some shingles along some upstairs bump outs and some scarring of shingles, but other than that, the install was ok. | |Two years later, my roof begins to leak. This is where the major problem came in. They were not very responsive to the leak and their first two attempts at fixing the problem failed. They finally got the leak fixed. I wasn't horribly mad that the 2 year old roof developed a leak, but I did not like the fact that I had to call multiple times to get it fixed and the initial fix was just a little bit or roof caulk (failed miserably). Then, more of the same, multiple calls to get another failed attempt. Finally, the third attempted fix was successful. That was the last chance I was giving them before I was going to make them tear that section off and re roof it. To their credit, the drywall in my garage was ruined. They did replace that but the guy they sent did not have any means to transport drywall, so we went to home depot in my truck to get the drywall (they did pay for it). I also helped the guy hang the drywall. He did finish it. | |In closing, they did honor their warranty it was just very painful to get them to come fix their roof. Combine that with their initial poor cleanup and it wasn't a very good experience. They do seem like nice people, too, so that's why I gave them an overall C, but I could never use them again.

As Oklahoman's know, when a tornado strikes, it is usually devastating. At the time of this roofing job was no different. We had hundreds of customers that needed their roofs fixed yesterday. With [member name removed], we feel we went above and beyond. We repaired damages caused by wind that was outside of the insurance claim for no additional cost. [member name removed] wanted sheetrock delivere...
5.0

I am very happy with the service and quality of their work. I would highly recommend them.

DESCRIPTION OF WORK
We had a great experience with Brewer and Associates. They came out to do an inspection and were available when our insurance adjuster came out to look at the storm damage. They worked well with our insurance company. We were given a good selection of roofing materials. Brewer offers a broad selection of shingles and doesn't push a certain brand. They gave us their opinion on the different offerings of roofing materials. They were prompt in starting the job and finished in 3 days. They also completely replaced our old gutters with seamless gutters during the same week.