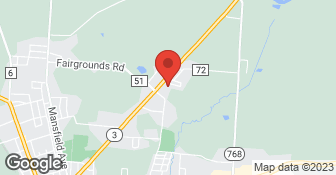 Our professionals have been servicing heating and cooling systems for 25 years. From repairing to replacing, we provide you with exceptional heating, cooling, HVAC and air quality services....

AC froze up, called our company, Cosby, on Friday afternoon. Sunday, after ac thawed and dried out (& I changed the filter that I hadn't done 🤦) we kicked it on... WORKED FINE! trying to do the right thing I tried to call office to at least leave a VM so they wouldn't make a wasted trip. Guess what... no VM prompt. I called back and using a prompt for a different Dept WITH A VM, I left a message. WELLLLLL THEN! Monday afternoon they call... Pretttttty sure it was Laura, said "tech on his way", "I said I got it working, I left a VM". This lady might as well have straight called me a liar! She said "they didn't have one, but ok whatever" 😮 then while I was talking.... HUNG UP! NICE MOVE! Cosby has now lost a customer anddddd since this unit is about at it's life max.... Lost an install job too!!!! Wayyyyy to go Laura! That's a good way to do the company you self proclaim to love!

Description of Work
AC has frozen up Thursday, made appt on Friday to have it looked at, appt set for Monday, July 27 between 12-4

This company installed everything correctly and was punctual and professional. The major problem I had with this company is the cost. Two technician’s were at my house for 1 hr and 45 minutes to install a dryer vent, bathroom exhaust vent, and dehumidifier drain tee. The round trip drive to my home was 40 minutes and likely no more than 35 minutes additionally to pick up parts. That’s three total hours of time at the most. Their estimate for this work was $1,325. Take $150 off for parts and the total ends up being $1,175. Divide that by 3 hours and that’s $390 per hour or $195 hourly per man. Those tech’s can’t be making more than about $40 an hour including benefits which is about $240 total for both of them for three hours time. Is it really fair for this company to then charge $311 more per hour, above and beyond the technician labor, to cover their overhead? Lawyer’s don’t even charge this much. Absolute insanity. They are truly screwing people every day. Next time you need some HVAC work done, call a small, independent installer like Keith at Homestead Air in Howard, Ohio who charges $90 for the first hour and $65 for each additional hour. If I would have hired him, I would have saved a ton of money. Don’t make the same mistake I did.

We have an old boiler and they've kept it going, and it's been great.

They were friendly and on time. They did the work as requested. We have no complaints. They were the cheapest.

Description of Work
We used Cosby. We have geothermal so that's why the price is a little bit more than the usual.

They arrived as scheduled and started work immediately. Due to some additional sheet metal work that was needed they needed to return to the shop to build the new sheet metal box. They returned and ensured that the furnace was installed to the point that we were able to have heat for the night. They returned the next day and replaced all the lines and also the outside fuse box. They also replaced the thermostat and completed the heat pump install before the day was over. This work was performed the week of Thanksgiving week and the install crew was great. They were very professional, courteous and kept us informed of the progress. I would highly recommend this company. They have been providing service for my home for about 20 years and I will continue to do business with them

Cosby Heating and Cooling has billed us $1025.10 for services and repairs after leading us to believe that the items were covered under warranty. The following is a timeline of events related to the invoice and an overview of our experience: April 13th, 2012 – We had a scheduled appointment for our Spring Maintenance. My wife had to call the receptionist mid-day and remind her of our 9am appointment time. The receptionist informed us that she would be sending someone out at that time (12N). The technician informed us that the pump was bad and that they would check the warranty and follow back up with us. Later in the afternoon my wife called and asked the receptionist to confirm the warranty and informed her that if anything wasn’t covered under the warranty we needed to know before the work was done as we had an existing home warranty that we would submit the charges to. My wife reinforced that the submission for the home warranty had to be done prior to work being done if the items were out of warranty. The receptionist assured her at that time that no work would ever be done without discussing the costs ahead of time and even stated, “If you don’t hear back from us we’re good to go”. April 17th, 2012 – My wife called to check status of service call and warranty. The receptionist followed up on the same day and stated that everything was good to move ahead on their end and she scheduled for April 19th. April 19th, 2012 – My wife called mid-day to see status of the service call and was told the date would need to be changed to April 20th or April 23rd. April 20th, 2012 – No one from Cosby Heating and Cooling showed up and no phone call was received. April 23rd, 2012 – Technician was supposed to be there at 9am but showed up at 11am and then had to leave again to get parts. From 11am to 4:30pm the technician spent more time out in his car on a mobile phone than he did in our house. The technician was ultimately unable to repair the pump. April 26th, 2012 – My wife called to see when the next service call would take place. The receptionist informed her that it would take place first thing in the morning on April 27th. April 27th, 2012 – My wife called at 12pm and 3pm to check on status of the service call. The receptionist stated at that time that they would be there. At around 4pm my wife missed a call informing her that they had run out of time that day for our service call and that they would get to us on Monday, April 30th. I called the office multiple times after 4:30pm and never received an answer. I paged the on-call service technician to find out what was going on. He returned my call promptly, was very apologetic and very professional. He voiced that they (Cosby Heating and Cooling) had some “issues” and that other technicians had voice their concerns as well. April 30th, 2012 – The Service Technician showed up at 8am and worked until early afternoon. As he was leaving my wife commented that the job had taken quite a while and at that point he informed my wife that they had to do much more work than just replace the pump. May 12th, 2012 – We received an invoice for over $1000 for the pump and several other items and Cosby Heating and Cooling is now stating they were NOT covered under warranty. May 14th, 2012 – My wife called and spoke with the receptionist who informed her that she’d have a warranty manager(?) give her a call. I called and requested to speak with a manager. The receptionist showed no sense of accountability or urgency to fix my problem. I informed her that this appeared as if it had been done intentionally and that I felt as if I needed an attorney. She responded with, “Maybe you should just have your attorney talk to ours. We have an attorney too you know.” I was frustrated so maybe my comment came off as a threat but I got off the call feeling the opposite. May 15th, 2012 – I called and spoke with the receptionist to see if anyone would be calling me back today. She stated the manager was in the office and then left the phone for a couple of minutes. When she returned she told me that he was not ready to talk to me? As of 7pm on May 15th no one has returned my call. I imagine I'd not be as agitated right now if it weren't for the receptionist's attitude and my own gut feeling that I've been swindled. The fact that no one will talk to me doesn't help either.

The service was fine, we have the furnace in warranty with their services. Typically they give an invoice from their work and when I asked the worker for the invoice he said it was free of charge. I then received a bill later for his labor. I called them to ask about charge and they again explained it was for labor.

Description of Work
We had heard a noise in our furnace and they came over to check it out for us.

They were quick to respond to my inquiry and they came out when they said they would. The whole estimate took less than 15 minutes.

Description of Work
We got a quote from Cosby Heating & Cooling to replace our dead air conditioner and put in a new unit.

They did a great job and the geothermal system is great. They were professional and cleaned up their work. They installed some new duct work. I will use them again in the future.

I don't have a problem with the work I had done with their company. They don't always come when they say they're going to come and they don't call when they say they'll be showing up. Their work ethic and professionalism is good when they're on site. They just aren't as reliable as some other companies may be.

Description of Work
They worked on my air conditioning system of my house.

Your locally owned and operated HVAC repair and installation experts. From furnace and AC replacements, to duct work and inspections, we are here to serve. Ask about our geothermal work and call our heating and cooling techs today!  …

Climate Heating & Cooling is not your average HVAC repair company. Founded by two determined, family men, Climate Heating & Cooling’s core is based on values and morals that make us stand out. Providing reliable, effective, honest, and concise HVAC services to both commercial and residential properties, it is our goal to not just tell you why we are the best, but to prove it to you. Check us out on Facebook.  …

Cosby Heating & Cooling is currently rated 4.4 overall out of 5.