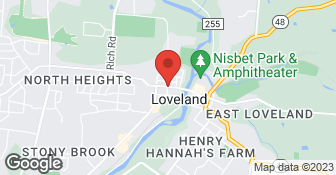 Finer Lawn & Landscaping is complete to do all Landscaping jobs. At no charge to you: 1) we come to your residential or commercial site 2) you tell us your needs 3) We mail you a free estimate. All pricing is up front before job starts....

We are a Veteran owned, full service landscape company located in Amelia Ohio. We provide quality services for our Commercial and Residential customers. No job is too large nor too small. Let us design and built your dream outdoor living area. Whether its a paver patio area or beautiful water features, we will meet with you and provide a free estimate. Some of our services include lawn maintenance, installation of plants, patios, retaining walls, and water features. We also do mowing, shrub and tree trimming, leaf removal and snow removal. Call Jayce at 513-702-1543  …

We specialize in everything concrete. Need that drive way fixed or extended? Sidewalk crumbling? Does the Mrs. want a beautiful stamped patio to entertain guest in the backyard? We have over 30 years experience in the industry and we are fully insured. Call us to schedule your free estimate.  …

Took advantage of my 91 year old mother. Didn't complete the job and what they did was subpar. The only thing the did efficiently was cash my mothers checks. BBB complaint filed after no response.

Donnie and his staff arrived promptly and completed the job in the time specified. Went over and above to accommodate my schedule which means a lot. Great looking sidewalk and thorough cleanup.

Very disappointed. Long on expectations and short on delivery. Spent every dime they asked for. Seemed far too busy to get our work done well. Arrogant approach to customer relations with "neither of us is pleased, so let's just disagree." All work not completed as bid and one koi pond will have to be completely dismantled and rebuilt because of their work. To give them every chance to make it right. Just wouldn't. Seriously disappointed and cannot recommend...

They did a good job when they arrived worked at a steady pace. Finished on time, Railing for steps had some issue. They returned and fix the problem.

We were not too happy with them. We were not happy with how things played out. We have yet to see if it solves the problem or now. They passed it off to a subcontractor. We had to call them back a couple of times. I could not recommend them. We contracted with one person and they sent out another. The work was not done as I felt it should be. We have more weeds now when they were suppose to be put seed down.

Description of Work
I used Finer Lawn & Landscaping LLC for grading a partial part of the yard.

The crew was at my house for two days. They cleanup up after themselves and did a very nice job building the stone wall. The mortar job was also well done and they were super accommodating when I asked for any changes to the wall shape. I don't know what went on with this company years ago to rate such terrible reviews - I found them to be professional and competent. The second day it rained and the job was stopped for several hours. As a result they worked until dark and some of the clean up was left undone. This is why I did not give them an A rating.

Description of Work
Remove an existing brick garden border and put up a stone border.

Donnie and his crew did an excellent job of building the landscape wall and putting pavers over our concrete patio. In this case, they did all digging and transporting of pavers by hand so as to disturb the lawn and landscape as little as possible.

Terrible experience from start to finish. After pointing out several things, like you should trim and pull weeds before mulching, the man in charge advised me that these were just contractors and he was having to explain how to do everything. After an argument in my yard, everyone left but one man. The price was supposed to be $1150 but $250 was removed for all of the problems. 2 weeks later, the mulch beds look terrible, weeds growing, edging around trees was never done, another bed is half done. Left a message requesting a phone call last week. No reply.

Description of Work
The contract states "Spring Cleanup, and mulch. We will do a complete lawn/landscape bed cleanup, debris removal, triming and pruning, edging beds, pulling weeds, apply weed control, and put down fresh black color/enhanced mulch to all beds."

I cannot state strongly enough how much of a nightmare this entire experience has been. First of all the work was done when I was out of town, my mistake I readily admit. I came home to find that they had poured a patio that is 2 1/2 feet above the ground. It is literally an island in the middle of my backyard. Besides the fact that it is a safety hazard, you could seriously fall off of the thing and hurt yourself, it is poured from the second step instead of from the ground. When I asked Donnie why he would start pouring from there he told me he didn't, he started pouring out in the yard. He did no excavating whatsoever, just poured a concrete base from the ground up, my yard slopes quite a bit so I ended up with the island patio. I told him I wanted it torn down and done correctly and he flatly refused. Instead he offered to bring in fill dirt, which would not solve the problem. On top of this, there are pavers over the concrete on the patio and the steps. The steps were never finished, they have no sand poured in them, they have already come loose. The yard was never tilled when he seeded it so weeds are coming up everywhere. He was to clean along my fence line and there are still weeds and parts of trees laying along the fence line. He was to pour a concrete base for my garbage cans and then build a fence around it, apparently he ran out of concrete because what I have instead is a half mound of concrete and the other half filled with dirt. The fence is also made from skid material, the cheapest wood in the world, however I did not specify what kind of wood I wanted so I guess that is my fault again. He put gravel in my driveway with no boarder so I have gravel seeping into the yard. He was to trim all the dead branches from the tree overhanging the patio and it still has several dead branches. He has tried to get me to pay him the 25% left open on the contract and I am flatly refusing to until he completes the work. I have received many unpleasant and HIGHLY unprofessional texts and voice mails from him about this, he insists he has completed the work and I owe him the remaining money. I have sent a letter detailing what needs to be completed and stating that even when it was completed I would not be happy but that I would pay the remainder of the money left open on the contract. In response I got yet another voice mail (I should also mention he calls at absurd hours, once at 9:30 pm and another time at 8:15 pm) in which he stated "you aren't going to be happy and neither am I". I must have missed the part where he paid ME to perform a service, I've never had anyone I hired before say it was my job to make them happy. Needless to say, not only would I NEVER hire him again, I am going to hire a different landscaper to fix everything he did. A very, very, very expensive learning experience for me.

Description of Work
Cut down tree, tore out old back steps, put in new back steps, walkway and patio. Landscaped back yard and part of the front yard. Put in small fence to hide garbage cans, seeded the lawn.

This is some of the worst work I have ever hired out. I absolutely would not hire this company to do any work around our house. They sealed over rust stains on our patio, they missed dozens of spots on the pergola and the work on the deck was abysmal! They had to cut some new boards, and then left the saw dust on the deck, over which they applied the stain. So we had saw dust stained into the surface of our deck. I had to get on my hands and knees and literally scrape the saw dust from the joints in the deck boards. The stain was applied so poorly that I had to re-stain the entire deck. This is by far the worst work I have ever seen. I should have known from our experience with the Christmas lights, where they tore off a piece of shingle and left broker bulbs around our mulch beds where our dog could have easily cut her foot - that they weren't to be trusted. Do not hire this company.

Description of Work
Hired this company to clean and seal our stamped patio, clean and stain our pergola and to clean stain and repair our deck. Had also hired them last Christmas to put lights across the house.