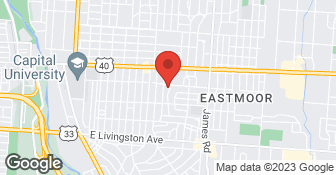 The walls had a lot of damage, and after they did the job, they look beautiful! Excellent work!

Description of Work
I purchased an offer for drywall repair.

Initially I had asked Brian to replace the threshold in my garage entry door. My house is 40 years old and the door is the original. Brian quickly found that the threshold I needed is not available, so we decided to replace the the door. Brian did his usually job. The new door looks great and his clean up afterwards was outstanding. He is very conscientous and his work is very professional.

We Appreciate the reviews. Take care and call us when you need us.
5.0

He did a great job and made sure the job was done to my satisfaction. Great worker and does great work.

Description of Work
Exchanged a ceiling light, added some dimmers and hung a few pictures

Thank you for your service! and thank you for the review. Please call us when you need us. Respectfully, Brian
5.0

Description of Work
Cut a 9 foot steel basketball pole to ground level. Then busted up 4 inches of concrete support and another 4 inches of pole. Filled pole support area with 4 inches of dirt and tamped dirt into place for grass seeding. Ensured pole fell to ground and not on driveway. Complete clean-up and haul away.

We appreciate the business and the review. Please call us when you need us. Respectfully, Make A List.
1.0

First off there was problems with scheduling. The owner and the person who showed up, had two completely different stories. The quality to work was awful and worse that what I would have done. All of the edging was terrible. They also messed up and started painting the alcove above the shower the wall color. Luckily I had a gallon of white paint, so they had to repaint the entire ceiling and that was an extra cost to me. Then one of the painters was hinting around that he wanted music, so I brought in my child’s radio and asked him what station he wanted it on. He said it didn’t matter. So I put on Sunny 95 and left. When I came back home, there was paint all over the radio, all over the knobs and dripped in to the knobs too. When I came home from work and saw the lack of quality from the painting job, I called the owner. We set an appointment and he was going to come out to fix that, but he never showed up. On top of that, in my bathroom the toilet was in an extra area, with a separate door. The company charged me extra for that, even though the room I had them paint, all of that was in the bathroom. He said the 3x6 toilet area was an extra room. Buyer’s Beware!

Description of Work
I purchased a deal from this company for $99 for 1 room of interior painting!

WE RATE THIS CUSTOMER WITH A "DC" for (dishonest customer). and we give this customer's review NO credence. This customer is completely dishonest. One thing after another with this customer including schedule changing. No we didn't borrow a radio, yes we did a professional job and did extra work without charging to boot which included removing many wall hangings that were part of the customers responsibility in the fine print. She wanted an extra toilet room painted and we told her how much it would cost and only charged her 50% of the normal cost to do that. This bathroom was very large including a spa bath. She still owes the company $55.00 dollars. She should be banned from Angies List! Thankfully almost all of our angies list customers have been a pleasure to work for and we greatly appreciate their business. To bad you have some bad apples in a bushel sometimes. It happens and we drive on. Respectfully, Brian.
5.0

I called Brian in the morning right after the bracket which held up the blinds to my sliding glass door came apart. He kindly squeezed me in his busy day and worked around my schedule as well. He arrived close to the time he had told me but was a little delayed due to rush hour which was reasonable. He was professional and quickly went to work to reinstall the casing which had come loose from the wall and reinstalled my blinds after that was put back up. I really appreciated that he fit me in the day I called as I was having a very stressful day and this took one thing off my long list. Thank you Brian and Angie's List for helping me find a good service provider.

Description of Work
Brian reinstalled the casing and window bracket for my blinds.

We appreciate the review and wish you the best. take care, Brian.
5.0

He painted our living room. The work was completed in one day. The service was fine.

Description of Work
I purchased a big deal for $99 for 1 Room of Interior Painting.

Thanks for the review. Please call us when you need us. Respectfully, Brian.
4.0

Everything turned out just fine. I liked I did not have to do it myself. There was some minor clean up I had to do. There was one person here painting and it took about 4 hours to complete.

Description of Work
I purchased the big deal for $99 for 1 Room of Interior Painting. They painted a bedroom. I did have to pay additional to paint the closet.

Closets can be time consuming and was not part of this deal. We appreciated your business. Respectfully, Brian.
4.0

Nothing horrible happened, there is no drama here. Just that in general the provider did an only-ok, barely acceptable job on tasks that were not difficult...cut corners whenever possible...then promised to contact the homeowner as follow-up within 24 hours to a question that had come up (with associated additional work that would come with it)...the provider never contacted the homeowner again, and as part of the disappearing routine left one job unfinished. I know there are many out there who are worse, but I would hope there are also at least several who are much more focused than this service provider. Maybe things have improved for him...I hope so, he was a nice guy but very scattered.

The customer the (daughter) of the (parents) were all very happy with the performance of our work "customer happy". As soon as I saw this report I contacted the customer (daughter) the one who hired us and asked her about the review. She stated that a friend of the (parents) helped them write the review. I remember the (daughter) and (parents) telling me that they had a problem with someone else. The review probably belongs to them. I know in this case it does not belong to us. After talking to the (daughter) the customer stated she would contact angies list to get this resolved and would make the adjustments afforded to her by angies list. Respectfully, Brian.
5.0

The garage door specialist came the next day and fixed the problem quickly and inexpensively. The garbage disposal had to be replaced which my son took care of.

Thanks for taking the time to submit your review. Respectfully, Brian.

Since 2004 I have been designing and installing low voltage outdoor lighting systems for residential clients. Unlike our competition, we are not a division of a larger landscape company, and we are not a national franchise. This means our only focus is on outdoor lighting and our creativity and flexibility is not beholden to a particular product line or business model. As owner, I work on every job we install and take pride and ownership in each one. We vow to make the night the most beautiful and inviting time to enjoy your outdoor home.  …

1 employees. No subs. Charges by the job. No travel charges.  …

Bonded
Insured
All statements concerning insurance, licenses, and bonds are informational only, and are self-reported. Since insurance, licenses and bonds can expire and can be cancelled, homeowners should always check such information for themselves.To find more licensing information for your state, visit our Find Licensing Requirements page.
General Information
Free Estimates
Yes, but does not include troubleshooting
Eco-Friendly Accreditations
Yes
Payment Options
Check, PayPal, Visa, MasterCard, American Express, Discover
Senior Discount
10%
Warranties
Yes

All things considered, all projects considered. Just "Make a List" and give us a call at 614-805-3428 and we will take care of the list for you. Residential, existing and new construction, commercial or light industrial.

How is Make a List Handy Man Services overall rated?

Make a List Handy Man Services is currently rated 4.5 overall out of 5.

What days are Make a List Handy Man Services open?

No, Make a List Handy Man Services does not offer free project estimates.

No, Make a List Handy Man Services does not offer a senior discount.

Are warranties offered by Make a List Handy Man Services?

What services does Make a List Handy Man Services offer?

Make a List Handy Man Services offers the following services: All things considered, all projects considered. Just "Make a List" and give us a call at 614-805-3428 and we will take care of the list for you. Residential, existing and new construction, commercial or light industrial.

Are there any services Make a List Handy Man Services does not offer?