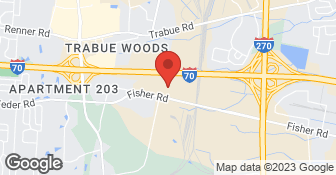 Berger, Allied's largest agent, is a full-service moving company that specializes in the transportation and storage of household goods, office and industrial equipment, special products and product distribution. We are movers who provide local, long distance and international moving services for residential customers, businesses and government agencies. Berger is a moving company with 100 years experience. Check out the Berger timeline. We operate 18 full-service locations nationwide and have access to one of the largest moving networks in the world. We are also an active, accredited member of the Better Business Bureau (BBB). ...

Things went very well. They misplaced the inventory sheets, but we found them at our old house before we left. As a result, our couch was placed in another person's belongings, but it was quickly sorted out, and it was on the truck with the rest of our items, so there was no delay in getting it. The driver was especially kind. He took a large 30 year old house plant with him in his truck the entire 3000 miles so we didn't have to throw it away. We really appreciated that! The only thing that was damaged was a cheap lampshade. After reading so many nightmare stories online about things getting broken, the fact that nothing of value was damaged at all was really impressive. The only thing that I could think of that might be of concern, is the guy that the driver had with him on the delivery run was very bitter, and he complained the entire 4 hour unload time about various things and people. It made the unloading process awkward, as we had to constantly duck into other rooms to avoid him, and I feel badly our poor driver had to deal with him! The 2 movers that came with the driver to pick things up/load the truck were VERY friendly and kind. Finally, there was NO follow-up after the movers left: No, "How did it go?" call or anything. They left and it was over. We thought it was a little strange, but we figured that of they did that sort of call, they might get a lot of complaints. It would have been nice to have a closing call though. I would recommend Allied to anyone moving across country. They did a great job. Nothing was damaged. They were very kind and easy to get a hold of.

Description of Work
Allied moved our things from our 4 bedroom house from Columbus, Ohio to Kirkland, Washington.

We contacted Berger/Allied. An appointment was set up within the next three days. Sales representative arrived (on time) began taking an inventory of goods. An estimate was sent the next day....and selected Berger Allied as carrier. The day of packing three people arrived, looked around and quoted "this is more than a day of packing." They began to pack and realized that they would not have enough time to pack all the goods.They made a phone call (assuming to Service Representative) and told us that 'they could not finish that day, so one person will be sent back the next day to finish packing.' With our urging they sent two people back the next day which was the day of the move. They were finished about 2:00 pm in the afternoon same day. Therefore, they were moving and packing at the same time which caused choas....and trying to watch what was going on with packers and movers is not the way it was suppose to go. Now, later when checking the cabinets (which the packers were supposed to do) we discovered that the packers had not packed a complete section of dishes from the kitchen cabinets and the Van is gone, the office is closed, it's Saturday and the office will not open again until Monday morning. So,we had to buy boxes to pack the remaining dishes wait until Monday to contact them, then they could not pick up the boxes because the Van was gone. Therefore, another truck had to pick up the boxes and take to the orginal drivers. The truck driver and his crew were very professional and helpful. The storage was delivered first and because the boxes were either unmarked or marked wrong many of the item were delivered to storage and the apartment with the wrong content. Many boxes were delivered to the apartment erroneously, so my wife and I spent two weeks trying to deceifer and repack boxes for storage. I repacked, went up and down the stairs, and took boxes to storeage for what I thought I had paid for in the beginning. Several items were broken because they were not packed correctly, one was a favorite piece that my wife actually cried about.. One of my flat screen TVs (which they said was packed in a special box) was opened and the TV had slid down in the box. The T.V works, but the picture is not as clear as it use to be. Now, because our more expensive items went into storage we are now worried about the condition of these items and they are saying that their resposibility is over. We could not open all these boxes at the time of delivery to make sure everyting was okay. This was terrible from start to finish. Even though we read the package, things did not go as stated in the information. I feel that we did not get a fair deal on the move and alot of things could have been avoided.

Description of Work
Make sure the estimator give enough time for the packer to pack, we gave him the date to pack and as a professional he should have told us that it would take more than one day. Make sure the packers and the truck loading does not happen at the same time (Choas). Watch everything they pack and how they pack. They told us they would pack one way and when we received the package several item were broken because they did not pack as said. Also shoes and clothes from the drawers were packed messy. Make sure the boxes are marked properly for delivery to the correct places if some are going into storage. Several boxes were not marked at all. Do look at the bill of laiding describing the condition of the furniture...and make sure they mark the furniture properly. Because of this they marked things erroneously. We had a brand new couch and two new leather chairs that was marked soiled and scracthed. Most of our belonging were in good condition and they marked it the same way.

They were unprofessional, and I had some jewelry turn up missing. We also lost some pieces to our refrigerator,

Description of Work
They moved us into our new home.

We were very pleased with this company. We had no broken or damaged furniture. There were also no walls that were damaged. They were prompted and delivered everything right on time. They were very clean and friendly, as well as cooperative.

Description of Work
They moved us from Columbus, OH to Ashland, Va.

My moving day was horrible due to the sloppiness, inattention and careless handling of my household possessions by Berger/Allied Van Lines. Within minutes of arriving, the over-the-road van driver, Mike McCloy, was audibly arguing in my driveway with the local movers. Then, the driver refused to inventory ANY of my boxes, furniture or possessions with stickers and reference sheet like he was supposed to do according to the salesman and previous day packers. Even after I reminded the driver that he needed to inventory my shipment, he refused and arrogantly threw the roll of stickers into the trash! The driver also instructed the local movers to tip my plasma TV onto a dolly which had been carefully packed by Berger movers the previous day at which time the $6,000 TV proceeded to fall out of the box. The movers also scratched my hardwood floors by being in a hurry and mishandling my furniture. Needless to say, I voiced my concern at the time with the driver and called the company. The company representative, assured me that everything would be fine and that the owner, Hal Berger, would call me. Hal Berger did call me to discuss his disappointment in the driver?s refusal to inventorying my shipment and said he would talk to him during the week that my shipment was in transit on the truck. Hal Berger and the Austin, Texas, supervisor for the truck driver said they would use this experience as a learning experience for the driver? which I thought was very patronizing since the driver had worked for the company for over 11 years and should have been through his orientation to proper inventorying procedure many years before now. In one week, my shipment arrived and the same driver was very apologetic and admitted he was taking a short cuts by not inventorying my items. I haven?t unpacked all the boxes and everything seems to have arrived safely, but nothing will make up for the horrible moving day experience and the helplessness I felt as my cherished antiques, memories and belongings were entrusted to Berger/Allied. In retrospect, I should have called off the move with Berger/Allied Van Lines within the first 15 minutes when I realized how unsettling and shoddy the service was going to be. If anyone is moving out of state from Columbus, Ohio, I highly recommend contracting any other company rather than Berger/Allied.

Description of Work
Berger/Allied Van Lines moved our household possessions from Columbus, Ohio to Montgomery, Texas (Houston area). They also packed a few of our valuables such as plasma TV, artwork and mirrors.

The packing job was half hazard. Some items were wrapped but others appeared to be dropped into boxes. Many of the boxes were mislabeled and we have had a lot of damage. When loading there were not enough floor coverings placed down on the floors and snow, mud and salt were on every surface from the basement to the second floor.

Description of Work
They did a complete mover for us from Columbus to Sugar Hill, GA.