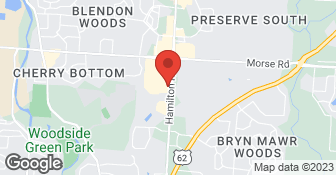 Ace Home Servicing is a full service Handyman company. We are part of a group of companies taking care of all of your home needs. We pride ourselves on the ability to service every handyman project or "to do" list we're presented. Our clients no longer have to waste time and money hiring several different companies to complete multiple projects. We are licensed, bonded and insured. We look forward to servicing your next repair, renovation, upgrade or odd job....

It remains a nightmare, and is not settled. The contract that was drawn up specifically stated the colors of paint that took a lot of thought to select (see above list). When I walked into the condo the first day of painting, I immediately noticed that what was to be the Benjamin Moore Café Royal #1130 paint, that covers all walls but the bathrooms, had a very noticeable pink tinge to it. BM Café Royal #1130 paint has a yellow tinge as its base. When I complained about the wrong paint being used, I got an angry excuse from Eric, the coordinator, or whatever he was, of the project, saying that the paint I wanted was too expensive so they got Sherwin Williams colors that weren't even close to what I wanted. WOW!!! There was no discussion at all. He said it would cost more to get the BM paint I wanted, so he took it upon himself to proceed HIS way. I wanted to get this done so I agreed to more money, but was told by my trustee that I shouldn't have done that because the correct colors were stated in the contract, and were identified as BM paint, and I had no reason to doubt that they wouldn’t be used. I shouldn’t have to pay for what I was supposed to get in the first place. PLUS, at no time was the cost of the paint brought up as being more than budgeted (there wasn’t a budget, per se). I had movers that were scheduled at the time, and it was a very tense situation to get the job done, and have dry paint, before they brought in the furniture. After consideration under duress, the Benjamin Moore paint was supposed to be used as a planned second coat the next day. A BM rep said that paint of a different hue needs to settle for at least a week before a second is applied so the paints don’t have time to mingle unappealingly. So much for the plan, but I found that out after, not before. I didn't feel right, but asked for proof that the number of cans of Benjamin Moore paint that was needed for the entire condo were actually purchased. I was given some runaround as an excuse that paperwork like that isn't available as "someone else" bought the paint for them to use? A receipt was eventually produced with one can going back as it wasn’t needed. Allegedly, the second coat was applied, but to my trained "color" eye, it wasn't, as the dreaded pink was still present on the main walls and in the basement office area. There are some other things that don’t quite pass muster as well: 1) The painter who owns the company that was hired leaned up against the wall that was supposed to have been painted the second coat earlier that day, and it didn’t smear or get on his clothes at all; 2) I noticed that the wall socket plates were back in their proper places (too soon after painting earlier?), but upon checking them, paint was bone dry, not fresh as it still should have been, and no paint came off on those wall plates; and, 3) one can of BM paint was sent back, but if they had ordered the correct amount of paint for the second coat to match what they had ordered when they got Sherwin Williams paint, then what did they NOT paint the second coat of the correct paint? There are so many things wrong here, along with the lack of trust in general, I’m deducting any addition of BM paint to my bill since there’s no justification in paying for something that I had no reason to think I wasn’t getting because it was specifically stated, plus I don’t trust what is there now. It left a sick stomach and I am going to have someone more reliable redo the job with the paint I was supposed to get. Total cost was supposed to be $2,000, but I am reducing it significantly, but allowing for the bathrooms that seem to match what I wanted. This is what a trustee and an attorney are for as it was too much for me at that point. We haven’t come to a decision but I had already stopped payment on my check that involved painting services earlier. I had planned this move for a long time, and the colors were consistent no matter where I ended up. They were embedded in my brain. I didn't expect a disaster of this caliber. If you hire Ace Home Services for anything, I'm not sure painting should be considered in the list of things that they should do, especially if Eric is in charge of any of it. If you have worked **** ** your color decisions, you deserve a respect that he can’t seem to muster with his poor communication skills. That guy will screw up white paint, and there are at least 723 shades of white, so that would be a very interesting battle.

Description of Work
Painting the interior walls of my condo specifically defined in the contract (name and number of paint) as Benjamin Moore colors. There were three (3) colors: 1) The most important one is BM Cafe Royal #1130, and it covers the majority wall space on 3 levels; 2) 1/2 bath York Harbor Yellow #2154-40, and 3) Mountain Lane #488 is for master bath.

Description of Work
My front storm door wouldn't close and they repaired it.

Work was performed on time and to our complete satisfaction. Quoted price was fair and did not deviate on final invoice. Crew people were friendly and professional.

John was on time and he finished the job in the time they quoted me over the phone. He was friendly and professional (even to the dog) - would definitely hire again for any handyman work I need done.

They addressed everything they found from electronic to loose chimney bricks and they arrived on time and had the jobs done ahead of schedule. Helped us get a great price. Realtor mentioned the quality of the work when he came by to list for us. They were at the old home in June and out at the new one in September. Our go to people for quality.

Description of Work
Came through our home and corrected several issues so we could list it for sale and get a better price without leaving issues for the new house owners. Then they returned and corrected issues found at our new home that the inspection didn't mention.

Excellent there was insulation piled high against the attic walls after carpentry done several years ago. Charles did an excellent job in spreading the insulation evenly over the attic floor. He took pictures before the work was done and after he finished. He also found mice infestation in the attic.

I had some trouble getting the exact date set (I had to wait 4-5 days) but once that was settled they showed up on time and were done very quickly. I wasn't there but my wife said they were friendly and professional. All the work was done and I was satisfied with the results.

Description of Work
Ace sent two guys to repair a leaking window, remove some mold, replace a sump pump, and do some duct work in the attic.

Everything that I asked to be done was done and then some. They went out of their way to make sure everything was fixed and even fixed some things in my home that I did not even know that were wrong and they did not charge me anything extra.

Description of Work
I used Eric to fix some doors in my home, do some painting and prepare my home to be sold. Eric and his entire crew are very experienced, get projects completed in a timely manner and most importantly are honest and do not over charge. They are very fair and do excellent work. I highly recommend Eric and his crew.

This is a great company to use if you have multiple things to do around the house. They do everything. We are actually waiting on them to come out next week and complete a large list this time. The best deal is having a two man crew come out and give them enough work for a whole day. They discount the second man $15/hr and they give a discount for scheduling them an entire day. It's a great deal considering they can do whatever you ask and they will install whatever you purchase. The only reason I gave them a B on responsiveness is because of how long you have to wait for their services. They seem to be backed up. ( I guess they are in high demand) I'm not sure what would happen in an emergency situation, but so far, this company is great.

Description of Work
Ace installed a new faucet and ceiling fan my wife bought at Lowes. They also mounted a big screen tv on our bedroom wall and fixed the swingset in the backyard.

A highly experienced Construction Company with dedication to provide top notch and fine grade commitment on every job. Services which includes all Drainage, water, sewer, driveway and roads, too site clearing and building. We Strive for Customer Satisfaction with every detail.  …

Snap & Crack Locksmith is a bonded and insured locksmith company that’s been serving Columbus and the suburbs of Columbus since 2013. We have 4 storefront locations that are spread around Columbus for your convenience, below is a list of our locations along with some details about each location’s specialty. As a whole, we specialize in automotive, residential, safe, motorcycle, key duplication, and commercial locksmith services. We take pride in ensuring that our customers are 100% satisfied. To that end, we especially work hard to be one of the most efficient, quick, and reasonably priced locksmiths in Columbus. We’re able to do this by combining our skills, knowledge, equipment, and products. We believe the customer service experience starts with our dispatchers. Upon calling, our well-trained in-house dispatchers will gather all the information needed in order to provide you with a realistic and convenient arrival time but most importantly, an honest quote over the phone that is accurate over 99% of the time – no hidden fees or unnecessary upsells. Your 100% satisfaction is our #1 goal and we will work hard to reach that goal!  …

Bonded
Insured
All statements concerning insurance, licenses, and bonds are informational only, and are self-reported. Since insurance, licenses and bonds can expire and can be cancelled, homeowners should always check such information for themselves.To find more licensing information for your state, visit our Find Licensing Requirements page.
General Information
Free Estimates
Ask for Details
Eco-Friendly Accreditations
No
Payment Options
Check, Visa, MasterCard, American Express, Discover
Senior Discount
No
Warranties
Ask for Details

Ace Home Servicing is currently rated 4.9 overall out of 5.

No, Ace Home Servicing does not offer eco-friendly accreditations.

No, Ace Home Servicing does not offer a senior discount.

No, Ace Home Servicing does not offer warranties.