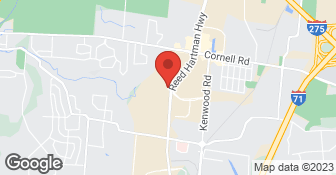 At Kings of Clean Cincinnati, we provide top notch pressure washing services in the Cincinnati and Northern Kentucky home and commercial markets. We have the equipment and training to do all sorts of jobs, including house washes, roof cleaning, deck cleaning/staining, driveway washing, and gutter repair and installation. Call us for all of your pressure washing needs! We are happy to provide a free, no obligation quote!  …

COVID 19 update: Interior estimates along with cleaning and painting are still being done by our company. Please don’t be afraid to reach out and give us a call or message. Cleaning surfaces and using masks are mandatory for the company representatives . Thank you.. By starting out in apartments and condominiums Ihave built my quality to a high end polish. Having a BFA in art gives me a insight to color and texture. I do color consulting and advise ideas, also doing faux finish. Give me your vision and I will make it come true not finishing til you are satisfied. We have won the Super Service Award 5 years in a row 2015- 19  …

The house looks good, but they cleaned out their van in my yard leaving trash and broken glass for me to pick out of the grass. The lead guy brought family members to help and they had probably never painted before. They spilled a whole bucket of paint in my garden and tried to hide it leaving me to discover it later.

installers admitted to having no prior experience, were smoking on my property, left cigarette butts behind, and in the spring I found numerous gutter hangers and trash from the light packages all over my property.

I asked for pressure washing, wood panel replacement, and painting. I got a good, timely estimate and the work was done timely as well. They did a good job and cleaned up afterwards. I would have no problems using them again. Ryan is the best!!

Description of Work
Painted the wood trim on the house.

They were very good. It is, like, two brothers or something. I thought we found them on Angie's List.

Description of Work
We used Color World Painting to paint the exterior of our house.

We canceled and they were very gracious.

Description of Work
We decided we did not need the service and canceled with them.

They were good. They did a good job and were very thorough. It wasn’t expensive.

Description of Work
I bought the Big Deal for Color World Housepainting Inc. They did pressure washing of the siding of the house.

My experience turned out fine. I had no issues with scheduling an appointment. They did the work while I was gone.

Description of Work
I purchased a deal for $149 for exterior home pressure washing.

They were initially responsive to the job and a date was agreed on. The job was performed when I was at work. The next morning while inspection the house I saw they failed to wash a side and a half. I immediately conbtacted them and was told they were done for the season and would contact me in March 2013 to finish the work. I contacted them on March 18th, as agreed. I was informed the "manager" would get in touch with me, as he was based out of Columbus and not available. I waited a week and recontacted them; the manager was still not available on the subsequent call. I waited another week and called a third time. This time I was informed the washer was no longer with the company and they would contact me as soon as they got another one, that they were booked up for the one they had. I reminded them I ahd been waiting since October for the job to be completed; to which, they informed me the "manager" would call me within a couple of days. I received a call from the manager, who apologized for the issues and that someone would be to my house within a week. Not only di the powerwasher spray my house but they decided to also powerwash my woood trim. It only cost me to have them repainted. During my experience with them they went through a change in company name and while I cannot say the reason, I have my own thoughts. There was a time when I would not write such a review eventhough I was not pleased with the work. I found that there are too many companies out there like this one who do not provide the service paid for and subsequent customers never become aware until it's too late. No, I would never use them again, nor would I suggest anyone else use or refer them.

Description of Work
Power washed the exterior of my house, which is a dryvit surface.

My experience with them was fine. They were there at the time they said they were going to be there. They were in and out in no time. So, it was great. They did not charge me more than the Big Deal. The quality of their work was excellent. The only issue we had initially was coordinating and scheduling time. After that, everything was fine. It took us awhile to get together.

Description of Work
I purchased a Big Deal for Color World Housepainting Inc. for $449 for three rooms of interior painting.

The experience was fantastic and they did a wonderful job.

Description of Work
I purchased a big deal form them. They sprayed the outside and power washed the house. I had some dark paint put around my house where my front door is.