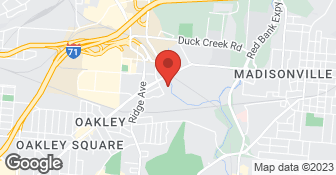 Apollo Home strives to be the one company you can count on day or night for home repair, maintenance and comfort. We specialize in residential repair and replacement of heating, ventilation, air conditioning (HVAC), plumbing and electrical systems, as well as drain clearing and main sewer line repair. We service Greater Cincinnati and Northern Kentucky. We are on time. We know your time is valuable, so Apollo promises to arrive at your home within the time window you select. If our technician doesn’t arrive on time, we’ll waive the service charge.* Repairs are Breakdown Free. If the same part or repair fails in the first year, we guarantee to replace the part and do the repair again for free.* We offer Peace of Mind. We accept responsibility for your complete 100% satisfaction with the operation of the equipment and service provided by Apollo and paid for by you. If you are dissatisfied with our work, we will promptly correct the problem or keep working until the problem is resolved. HVAC Lemons Not Allowed. Your entire heating or cooling unit installed by Apollo will be replaced by Apollo at NO CHARGE if your heat exchanger or AC compressor fails within 20 years of the installation date.** Apollo Home technicians, plumbers, and electricians are professionals who are trained to be experts in their fields and have received hundreds of hours of training from Apollo Home through our industry-certified education program, Apollo Home University. All of our HVAC technicians, electricians and plumbers wear an Apollo Home uniform and undergo a rigorous background check. The process includes drug testing, criminal check and drivers check. All are licensed and insured. We’re proud of our team and want you to be comfortable with them in your home. Feel free to ask them questions! They’re happy to explain their process, how something works or teach you how to perform basic maintenance....

Professional direct into the point. Very timely and very communicative.

Description of Work
A/C tune up

Top notch customer service, professionalism, and very thorough! I called Apollo for a second opinion after my home warranty-assigned contractor diagnosed a leak in the coil and wanted to charge me $1100 for a coil replacement. Apollo got me scheduled same day and offered a coupon for free second opinion. My tech, Rob, went above and beyond during the visit, and ultimately disagreed with the original diagnosis. The warranty’s contractor wouldn’t consider the second opinion and said I’d have to pay for the coil replacement before they’d recharge the unit. So I scheduled a follow up with Apollo to recharge the unit. Rob came back and checked the system, said it didn’t even need recharged, and said he still doesn’t think the coil doesn’t need replaced. Calling Apollo may have just saved me $1100 and they didn’t charge me a dime. As a brand new homeowner they’ll be choice for all HVAC service from here on out!

The rating is for the estimate/service charge, not work performed. Previously I have been very happy with Apollo but I have noticed in the past 1-2 years, they have gotten extremely pricey and always seem to push for other services or mention all of the extraneous things that could go wrong (seems very fear-based selling - may not be the tech's fault for having to do this, could be coming from corporate.) The tech told me there was some rust in my electric panel that indicates moisture - duh, I have a 125 year old house with a stone foundation - and then he said, "It could be fine for another 20 years, or it could completely go out tomorrow." Eyeroll. All I needed was an outdoor outlet replaced. It cost me $90 to have a service tech come out (expensive, but I understand their time is valuable). The estimate was for almost $500. When I declined, the tech asked what a better price might be for me - which 1-I'm not going to negotiate and 2-I was absolutely ticked that clearly if I had said yes to the initial amount, they would do it, but they were trying to see what they could get me for. NOPE. I contacted another electrician on Angi and they got it done in under an hour for $70. The worst part for Apollo is, I had used them for many things over the years - plumbing, electrical, handyman services. And they will never, ever get another request from me again.

Wonderful. Could not be happier. Todd is a total pro and nice guy.

When I called they implied they usually come out same day or the next. So you give them your info and they have scheduling call back. Earliest they could schedule was 10 days out!! This is a kitchen sink drain. I don't understand how they can tell you it would be a day at the most which I get, but then want to schedule 10 days out for a kitchen sink? Can't use it at all or the dishwasher, doesn't drain at all. I called back and asked about it and gentleman I talked to said he would look into it. Didn't hear back. So now I am back at square one.

Significantly overcharged for refrigerant refill on my AC, $320/lb for R410a versus $80-120/lb market rate. Even at this rate, I agreed to do refill when tech said I needed 1-2 lbs to get the unit working properly. He proceeded to fill 2 lbs ($700 with trip fee!) and then told me the unit would still not cool properly unless I continued to add more coolant. He ultimately added 4lbs and left me with a $1300 bill (which I’m disputing). Shop around if you do want to get gouged on price!

I wish I had asked for the Angi 5% discount. During a water heater check, Apollo recommended several purchases. When I indicated the estimate was high, the agent said nothing. The city inspector, after seeing the unit and the invoice, suggested I should have gotten 3 estimates, indicating to me he had seen better deals on comparable equipment. When I asked for a discount, the response was delayed over time and then rejected.

We are focused on helping owner occupied residential homeowners in the greater Cincinnati Area.

How is Apollo Home overall rated?

Apollo Home is currently rated 4.6 overall out of 5.

What days are Apollo Home open?

No, Apollo Home does not offer free project estimates.

No, Apollo Home does not offer a senior discount.

Are warranties offered by Apollo Home?

What services does Apollo Home offer?

Are there any services Apollo Home does not offer?

We are focused on helping owner occupied residential homeowners in the greater Cincinnati Area.