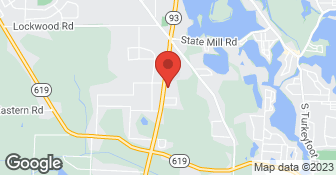 3 EMPLOYEES. COST IS DETERMINED BY THE JOB. NO TRAVEL CHARGES. NO SERVICE FEE. MAY CONTACT THROUGH EMAIL....

Best Buy Painting is a family owned, full service painting company, dedicated to providing superior interior, exterior, and specialty painting services to both residential and commercial customers in the Cleveland and Northeast Ohio area. As Cleveland house painters, Best Buy Painting is proud to deliver on job quality, customer satisfaction, and of course, our reputation.  …

Perfectly-Rich (owner) has done numerous jobs for me at a rental property, all have been great jobs. He truly cares about your budget and staying within his quote. I do not even consider calling anyone else when I need a job. He is the best!

Rich showed up on time and replaced the tub faucet with a model that matched the old style of the tub. This was for a rental property and the tenant was very pleased with the improved water pressure of the new fixture. Thanks Rich - great job!

Rich installed a new front door, lock and hardware for me around a year ago and I've since had problems w/the lock. Finally, it wouldn't turn at all so I called Rich. He responded quickly, took the entire lock apart and fixed it. He didn't charge me a cent. Rich is the best. Last year when we had a really bad storm w/high winds and rain, my garage ceiling was leaking badly . Again, I called him and he came right out and fixed it. I didn't know until later that his home was hit worse than mine. He was ankle deep in water in his basement, his tools were ruined as were his water heater and washer/dryer and he had no electricity but still he serviced my home before tackling his own. Now that's dedication. Just recently, he had an accident and got a concussion so he missed a little bit of work but as soon as he was feeling better, he got right back to work, did some odd jobs for me and serviced his other customers' needs as well. I can't say enough good things about this guy.

Description of Work
Took apart my dead bolt lock and fixed it so that it would turn properly.

What I forgot to state in the other review is the final construction company we hired had to fix his mess, for an added cost. the roofs did not line up properly and had to be torn apart and redone. The stucco on the back of the garage foundation was cracked and needed to be redone... when it rains the garage floor is sloped so that rain comes in and creates a puddle. When the drywall was put on they covered up some of the electrical outlets and that had to be redone the electrical was not completed. The new roof Rick put on the house had to be redone since he did not repair the underlayment. Again I want to express, you may want to use him as a handyman for small jobs but not for remodeling or construction of a home. Do not pay him until the job is done. We paid and the job was not completed..... fools that we were.

Description of Work
Rick was to build the third garage as stated in the other review.

More detail to follow.........do not ever contract a job with Coach Construction unless you pay as you go........after the work is done. Small jobs may be more to their ability, decks porches, etc. Stand alone garage maybe but never an attached garage. Our third contractor had to tear half the roof off to align the new roof with the old. Drywall was put over electrical outlets, The garage floor is not level and when it rains a puddle forms inside the garage from run off. The garage was not completed by Coach Construction, we were left with half a build, no driveway. The duration between Rich being on the job and off the job kept getting longer and longer, he would show up one day, stay for a couple hours and then we would not see him for another week until he finally quit coming and answering his phone. Coach construction cost us another 25k to fix the build he did incorrectly and to finish the build. I would highly recommend that Coach Construction be taken off Angie's List.

Description of Work
We hired Coach construction to build a third attached garage. The previous construction company Americo run by Paul Whited took our money and ran. We contracted Coach construction to basically complete the job. This entailed from floor on up. Rich came onto the job site and partially completed the garage, we had to contract a third contractor which was Perfect Construction, owner Bill Perfect... hooray we finally hit the jackpot after two attempts to have a garage built and spending over 50 grand on the first two pathetic builders.

I received an estimate but ultimately did not have the work done. I would be interested in them for another job in the future.

Description of Work
Received an estimate to repair a dock/boat house.

Do not pay until after the work is finished.

Description of Work
We wanted an additional attached garage and new roof on the house. We have a shell of the garage and new roof only.Started in May......it is now middle of August, one excuse after another, always taking other jobs, fitting us in when he could. Have not heard from Rich Phelps since 7/31/12, prior to 7/31/12 did not hear from him for a week and a half. Never returns phone calls, voice message is full..... on 7/31 Rich called to inform us he had an accident on another job and was in the hospital for a couple days. Then he called on 8/1 and told my husband he would be over in the afternoon on 8/2. Have not heard from him since, phones are not accepting messages. Not only do we not have a finished garage we are out $$$$$$$$$$.

He is very good and reliable. He is like a one-man show with a few extra people but he can do almost anything.

Description of Work
We are using Coach Construction for deck and garage construction. My husband found them on Angie's List.

called and left messages, never got a call back. not even to say 'sorry we're too busy.' must be nice to not need to call people back. too bad i won't be calling Coach Construction again.

I have used Rich on a few other projects around the house including replacing my roof and waterproofing the basement. Rich is very knowledgeable , honest, hard working and has reasonable prices. He shows up when he says he will and cleans up at the end of every day. I highly recommend him and will use him again for other projects I have planned.

Description of Work
I have an acre of land with a hill behind our house. Several areas in the backyard would flood and hold water near the house for several days after an average rain. Needed to install a french drain to remove the water more quickly and help with potential flooding in the basement. Rich dug a 2 foot wide trench approximately 265 feet long, installed a 6 inch french drain with surface drains approximately every 10 feet and had the drain empty into the street. The trench and the drain had the appropriate grade so that it would quickly drain into the street. The trench was filled with gravel with a layer of topsoil. All the areas were seeded, fertilized and hay placed on top. It has been about a week and the grass is growing in nicely . We had 2 storms in 2 days and the drains are working as they should.