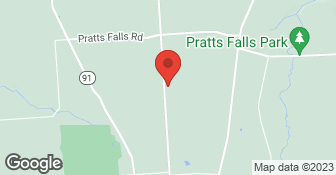 Each phase of the project was managed very well by the team from Sales, front office, estimating, installation, and coordination. The team responded to all our questions in a timely manner and kept us informed at each stage. The installers worked through the issues at our 100 year old property to accommodate the placement of the various system components and electrical connections. Coordination between the team members was key.

When Holbrook installed the furnace, I had no need for the included Tstat. I received no deduction from the total cost then and now, when a new Tstat was required, I was charged. I fully expected to pay for the service call, and the installation time charges, but I did not feel I should pay (again) for the Tstat. There was no consideration of my spending thousands with them. It was like I was a new customer. They did follow up with an email asking for my feedback via "click link below", however it contained no link! When I responded that they needed to send me their link, I received no reply. Also, I am guessing on the total cost of the visit, as I received no receipt whatever.

Had a section of our hot water system freeze this winter. Holbrook came out - “yep! It’s frozen and there is nothing we can do until warms up. Buy some space heaters. That’ll be $354 please” Had them back out because they took $100 off the next visit (no “callout” fee for the same problem in 30 days). Pipes unfroze on their own. Needed new antifreeze in system. They pumped in 15 gallons and charged me $1000. The guy was nice but had to keep calling someone to figure out exactly how to do it. The cost of the antifreeze they used would have been $354 shipped if I had bought it myself. After watching the guy do it, I realized I should have just watched a YouTube video and done it myself - it was that easy. So what would have cost me about $425(with a pump), they charged me 3 times that. Highway robbery preying on the trusting like me. I’m going to have 3 mini-split AC systems put in this summer along with a furnace overhaul. I’ll never use Holbrook again as it’s obvious they gouge.

I'm sorry that Mr. [Member Name Removed] felt that we did not perform the work to his satisfaction. We received a call from this customer at 8:53 a.m. Saturday, December 30th stating that there were frozen baseboards in the dining room, kitchen and master bedroom. We quoted the emergency pricing and sent a technician there to determine the next step. The technician found that all the zones were heating except the one. There was no access to the zone from underneath the addition. We had purposely brought the pipe thawer to use, but unfortunately, the piping materials for the zone was not conducive to being able to use (pex tubing). Determining that there was no other recourse, the technician then showed the customer how to open the zone if it warmed up and to call us when it was thawed. In summary, we went there with the intention of getting the customer heat in that zone. Due to the circumstances with boiler piping materials and zone configuration, there was not anything that we could do. The temperature that day was a high of 19 and a low of 0 (in Syracuse -- colder in his area). Many customers with hot water baseboard/radiant systems had problems. We did our best that day to get zones opened up and running. I will note that this customer called us back on January 11th to schedule an appointment to bleed the lines and add antifreeze. We returned, waived the service call as he noted, and added the antifreeze. Holbrook Heating does not gouge customers. We are transparent with our pricing and strive to get each and every customer heat during the initial visit. We are one of the few companies in this area that will come out the same day that you call us -- no waiting for 2-5 days due to backlogged calls. Understandably, we are not able to overcome situational constraints within a customer's home. We did our best and we stand behind that.
5.0

I hired Holbrook Heating Co. through Home Depot, not Angie's List. But since they are on this site, I want to say that they installed both my new water heater and AC units about 1 year ago. Both units are running great and they did a very professional job. I would definitely recommend their services!

Description of Work
New water heater and then a new AC unit.

Thank you Mr. [Member Name Removed] for being such a loyal customer and for your kind words regarding our company!
5.0

Description of Work
For heating and Ac, we have used Holbrook for furnace cleaning.

Description of Work
wanted central ac added to my home

I called them in a panic, as it was a holiday and February. They even brought a used furnace to save me money!

Description of Work
They brought a new furnace within 24 hours of mine breaking!

Will NOT, repeat NOT do business with HOLBROOK HEATING ever again!!!!

Description of Work
Have a relatively new natural gas fired hot water boiler installed in July 2012. In May 2016, started having problems with the unit. I also have a domestic hot water heater connected to the boiler, hence the boiler is in use year round. After 5 or 6 service calls and over $800 in charges. The problem still persists! Holbrook finally decided to contact a factory rep to come and take a look at the problem. The rep determines that the problem is a bad "board" and replaces it under warranty. The factory rep was accompanied by two Holbrook workers who basically did little to nothing. One of them fell asleep on my basement stairs!! After the rep repaired the boiler, one of the Holbrook workers was beginning to write up a bill for 2 hours work on Holbrook's labor!!! I informed him that they had not done really anything....and the the factory rep is the one who preformed 99.99% of the repair work. I told him to have the company president call me in the morning. I guess he never got the message..he never called me.

Mr. [Member Name Removed] neglects to mention that Holbrook Heating provided an estimate for a replacement boiler in 2012, but he went with another company. When the other company would not or could not make the repairs, he called [Member Information Removed]. This boiler was sold oversized for his home which was causing its own set of problems. When we arrived for the final repair, Mr. [Member Name Removed] and his son were aggressive towards our technicians, but we remained and let the manufacturer representative perform diagnosis as he was requested to do. We appreciate the fact that this customer not call [Member Information Removed] back again. We've been in business for over 30 years and our technical skills, customer service and willingness to work with customers is what we pride ourselves in. Unfortunately, it didn't work out in this case. We wish Mr. [Member Name Removed] only the best in his life and HVAC endeavors.
1.0

Holbrook hvac person came, looked everything over, said I needed over $1,000 of work to replumb everything. He then moved a recirculating section on the coal boiler to completely OFF. I have been working with a rep with the coal boiler company, who had a diagram, and photos of what I had. This Holbrook rep was completely WRONG in everything he did, MOSTLY the valve he turned off. I spoke with the coal boiler company, they said this could create an EXPLOSION!! Good thing I called, I quickly undid what this moron from Holbrook did, averting disaster. Told the manager at Holbrook this, they only halved my "service charge." Really? Why is it so hard to find people who know boilers?

Description of Work
Had an independent contractor who messed up part of my dual boiler install, was looking for assistance.

Proudly serving Upstate NY with air duct cleaning, dryer vent cleaning, and in-home air disinfection, which is approved by the FDA to kill Coronavirus. https://www.greenventcleaning.com We are the only local company that offers truly transparent pricing and full contactless online booking. We serve central/upstate New York with attention to detail and a commitment to thorough cleaning even if it costs us money-we always do the job right! Upon entering your home, our staff removes their shoes and treats your home with respect and care. You can rest assured that we will care for your home as we clean.  …

2012, 2013, 2014, 2015, 2016, 2017, 2018, and 2019, 2021 Super Service Award Winners! Murray's Heating is the only HVAC company in CNY to have achieved such recognition of superior service. At Murray's Heating & Air Conditioning, MHAC it has been our pleasure to serve our community for over 30 years. They are committed to offering quality products and service since the very beginning. Some features that make your choice an easy one include: Neat, professional Installers, family operation with Golden Rule philosophy, assistance with rebate and warranty paperwork, free estimates and attractive financing packages, and a truly genuine desire to make you a happy customer for many years! We do business the old-fashioned way - if you don't need it or want it, we won't try to sell it to you! Award winning service year after year!  …

No, Holbrook Heating & Air Conditioning Inc does not offer a senior discount.

No, Holbrook Heating & Air Conditioning Inc does not offer warranties.

Are there any services Holbrook Heating & Air Conditioning Inc does not offer?