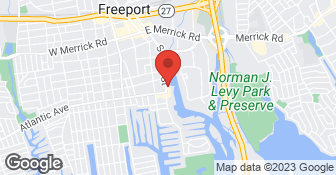 Dart Awnings is a leading awning manufacturer in the greater New York City area. We’ve been adorning homes and businesses with affordable, high-performing and attractive awnings for over 25 years. Our wealth of experience as a leading awning manufacturer gives us a clear advantage over our competitors. The expertise, knowledge, and value we offer make us the preferred choice for many New Yorkers for awnings, canopies, and other outdoor systems....

Dart Awning was wonderful. Personel explained my options and cost involved. The price was right, the repairs were perfect and customer service was excellent.

Thank you for taking the time to share this review. We are pleased to hear that you were satisfied with the the over all process. We really appreciate it! Thank you, Dart Awnings Staff
5.0

Daniella at Dart Awning could not have been more helpful and made the overall experience of selecting and purchasing a new awning really terrific. I've worked with other awning companies in the past and they don't compare. Dart delivered on every promise they made and it was a really pleasant experience. The price was very competitive and the team really worked with me on timing of installation which was very important to me. Their showroom was very nice and Daniella had the experience to help me select a fabric and trim that I'm 100% happy with.

Thank you so much, We are thrilled to hear that you are happy with your new canvas. We love to hear that our customers were satisfied with the final product. Im glad we took the time and picked the right fabric color to go beautifully with your home. Thank you again, Dart Awnings Staff
2.0

I had an appointment for March 6, 2018 @ 2:30 for an estimate for a new awning. The old one blew off in the windstorm on 3/2, the Representative never showed; no phone call, or anything.

Description of Work
A new awning

Mrs [Member Name Removed], we are so sorry to hear about the appointment issue you had. However, our records indict we spoke with you on March 9 and set up an appointment for Tuesday March 13 between 1 and 2pm. We did call the number provided to us at time of scheduling and speaking with a gentleman to make sure you were still available for the appointment. He informed us that he would call us back because he did not know about the appointment but no call was ever received. We did try calling the next two days to reschedule but did not hear back from anyone. We try our best to always call and let the homeowner know if we can't make it or running late. Our sale rep. has been with the company over 15 years. Please contact us at 516-544-2082 so that we can work toward a solution together. Thank you Dart Awnings Management
5.0

Salesman came called to let me know he was coming. He explained all my options and was patient even though family member did not like my choice of fabric pattern. He took measurements. After the ordered fabric was received, the fellows came to install framing when they said they were coming. Then they remeasured to make sure awning would fit properly. I was told that another support pole should be installed and the fabric is ready to be sewn. They would be back in a couple of days to install the awning. When they returned a couple of days later they had the sewn awning and the additional support for the awning. Each appointment was kept timely. The awning looks great!

Description of Work
Needed an awning over outside stairway to basement

Thank you so much, Mrs [Member Name Removed]. We are thrilled to hear that you are happy with your new canvas stationary awning. We hope you get many years of enjoyment from it. Thanks for taking the time to share this review. We really appreciate it!
5.0

Went pretty smoothly with no issues.

Description of Work
Installed an awning.

Thank you for your review. We rely on consumers like yourself to help other potential consumers purchase from reputable companies like us. We are glad to hear you had a great experience with us. Please be sure to tell your family and friends. We try our best to treat each customer like family.
5.0

They did a beautiful job. They did a wonderful job. The first time the guy came there gave me a measurement, and gave me an estimate and I decide to do it. Then another guy came back before they start awning and they came to a second measurement to make sure everything is correct. Then they came in again and start the awning. It was wonderful. They were very professional and the people I talked to in office were very pleasant and professional. And they did a beautiful job. I'm happy. Because next year I'm gonna do awnings in front of my house and I will call them again. Everything was done perfect I had no problem. I even take day off for me to be there when they come to install it. I tell them how I want it, when I want. And I went in the house, next thing I know they was knocking on my door letting me know they was done. And I came outside, inspect it and everything was beautiful.

Thank you for sharing your positive review. We are pleased to see you had a great experience with us. We look forward to working on more projects in the future!
4.0

I'd say that 95% went well, the remaining 5% was not up to expectation. That 5% wouldn't stop me from recommending them, but I think they need to tighten that up with me and anyone else that hires them. The sales call went well, but turns out it could have been handled a little better. One thing that I was pleasantly surprised with was the honesty. We were hoping to have these in for a specific event, the salesman told me up front that he would not promise the installation by that date, even if it cost him the sale. I appreciated that. I also appreciated the advice. We originally called regarding retractable awnings, but based on the distance they could extend and the sun angle at the time of day we'd want to use the awnings, we wouldn't get effective shade coverage and it would have been a waste of money. The only disappointment was after the fact in that there were some options we would have taken advantage of, such as zippered, removable sides and such that would have been easier and cheaper to add in during the manufacturing process than after the fact when the awnings are already installed. They came quickly, did a great job with the framing, then we waited for the fabric to be manufactured, which they only start after the framing is installed so they have exact measurements. Unfortunately they were not able to get the awnings up for our event, but we knew that was possible, so I take nothing away from them for this. I was told they tried, but these were large awnings, and it was very clearly a long shot when we signed on. They came and installed the awnings. They look great. That's where the last 5% comes into play, though. I was discussing some of the details, and the installers mentioned they could add in zippers to give us a better view of the patio from the deck, and had some other ideas. I was also told this was brought up among themselves during the framing installation, but nobody spoke to us about these details. We don't know what's possible, and they had some good ideas we would like to have ben told of. I expressed that disappointment, especially because if we add those options now, they are more difficult onsite and more expensive to install. Had we known, or at least been given the choice, we would have appreciated that very much. The fabric installers were understanding and said they would ask someone from the office to call to discuss. We still haven't gotten that call. I can call them, and most likely will, but they set an expectation for the call after knowing I was a little disappointed. I would have liked them to follow through. So the short story is, the awnings look great, they could have handled the sales/options process better, and we didn't get the follow-up after the installation as promised.

We always want our customers to be happy with the service and we are sorry for any inconvenience you have experienced. All of our staff tries and takes the extra step to have our customers have a good experience with our company. I will have a representative contact you and if you have any other questions please feel free to contact me!
5.0

It went fine. But then one of the awnings started to leak in the back because it was not corked properly. And then the other one has fallen down and is ripping the siding off our house.

Description of Work
they put up two awnings over our doors.

We are sorry for any inconvenience you have experienced. We do warranty all our products due to any defects in the material. The entire tristate area experienced a category 4 blizzard that caused many damages to homes and buildings and was even classified as a Natural disaster due to the extreme conditions. I am glad we were able to set up an appointment and extremely happy we were able to reinstall the awning for you at no cost due to the natural disaster. We always want our customers to be happy with the service. If you have any other concerns please do not hesitate to call me in the office.
5.0

The Dart Awnings installation crew arrived right on schedule. They worked, in earnest, on building our car port and an extended door canopy. The crew worked non-stop: no breaks, never wasting a moment, and working smoothly, together, effectively, and efficiently. The crew was in a positive frame of mind, good natured, polite and professional, at all times. Everyone knew their job, and performed it very well. They kept me apprised of the work progress, and made some very helpful suggestions to improve on the original plan. I watched the entire process, asked questions, and photographed all phases of the job. The crew was very cooperative, and pleased to explain what was being done. The final product is astounding! I would heartily recommend this crew to anyone contemplating a project such as this.

We are very happy you were pleased with the work performed by Dart Awnings. All our staffs try and take the extra step to have our customers have a good experience with our company. We don't just want to complete a job and be done, we want to create a beautiful awning and have a custom for life. We hope you enjoy your awning for many years to come.

How is Dart Awnings overall rated?

Dart Awnings is currently rated 4.9 overall out of 5.

What days are Dart Awnings open?

Are warranties offered by Dart Awnings?

What services does Dart Awnings offer?