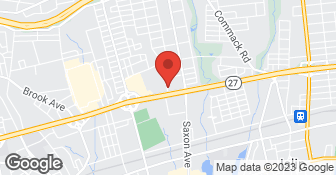 General Contractor. All aspects of home improvements "from start to finish."...

Welcome To Universal Roofing and Chimney I am Art owner of the company; I have been in the roofing and Masonry industry for more than 20 years. I have seen many companies working in this field without caring for their customers. I opened my company, and I can proudly say that my staff and I genuinely care for our customers. I am always within the scope of my customer base and always ready to provide the estimate of the products and services they needed. Universal roofing & Chimney is a family owned business, and as I am a family oriented person, I truly love to work in this industry, to uphold the reputation of my family high. My father started Mason when he was 15 years old he was & is number one building the houses from ground up, but he use to like more Mason work which he teaches me how to built houses do mason concrete clay shingle and flat roof, i start working part time with my father when i was 12 years old he use to take me around and show me how to build houses. I been working full time now more than 10 years but my father is retired now and I would like to extend the heights to see him proud of our company. Some people in this industry have given the poor standing by their nefarious deeds and practices, but I want to say that not everyone is like that. I have been serving Long Island for over 5 years and as local expert, we pride ourselves in providing outstanding services to commercial and residential customer base, as well. Customers can simply call me at my cell number 917-744-7943 to get a free estimate on all our Roofing, Chimney, Gutter, and Masonry services, and I assure them to give 10% off the cheapest estimate than other company is providing. We are always happy to receive the call enquiries and our emergency services are available 24 hours 7 days a week in Suffolk. Call us now to get the best estimate on all our Roofing and Chimney services. Services: Chimney Cleaning as low as $24.95 gutter cleaning as low as 34.95 Chimney Inspections Chimney Service Blockage Removal Chimney Problems Chimney Liners Chimney Caps Chimney & Fireplace Maintenance Chimney Repair Animal Removal From Chimneys roof leaks repair & removed and replaced Siding repair removed & replaced  …

Precision Painting Plus of Long Island

Precision Painting Plus is an award-winning painting company that has been around for 14 years. We are the fastest-growing and most reputable painting company in the US. That’s because we respect our customers, we care, and most importantly… we get it. Your home and business are personal. They’re a reflection of you. Our team doesn’t settle until we get your project done exactly how you want it, while also staying on time and in budget. With us, you’ll be assigned a dedicated project manager with a professional painting crew, and you’ll have friendly customer service to help you every step of the way! Additionally, with COVID-19, safety is a top focus! Not only do we follow CDC guidelines, wear protective equipment, and sanitize our work areas after completion, but we also offer free virtual quotes, delivered in 24 hours or less. We offer a 100% satisfaction guarantee on our wide variety of services. You can read about them below, and then reach out to us for your free estimate!  …

Please call our office today to schedule your free estimate 631-569-9084. We are a locally owned and operated company that values honesty and integrity and treats your home as if it were our own. You will find us to be competitively priced, paying close attention to the details of each and every project that we are involved with. We look forward to building lasting relationships and guarantee your satisfaction! We are GAF and OWENS CORNING CERTIFIED.  …

Description of Work
A new roof. They were prompt and did quality work. The one question we raised brought John to our house in less than 1/2 hour and the question was answered.

They called US to see if there was some service to provide. We had wanted to have radiant heat installed in our master bathroom. Was given a quote, signed the contract, they charged our credit card. A week later they started telling us that radiant heat wasn't going to heat the bathroom that we needed to install a heat blower. My husband asked a few questions and was told he would get a call back ...

We never received a quote or any follow-up communication after the initial visit on 9/15/2014.

Description of Work
It's been more than two weeks since we had Andy over to give us an estimate on renovating the downstairs part of our house. He spent a lot of time with us, but didn't show us any flooring or tile samples. In fact, we never received any follow-up communication at all, so we didn't get a quote. Big waste of time.

They seemed a little disorganized and they used different guys that came on different times. I think it was overpriced. The quality of the work was not too bad.

Description of Work
I used All Rite Home Improvements. They did some minor cement work. They replaced small parts of a piece of wood near the window of my house and a piece of aluminum siding.