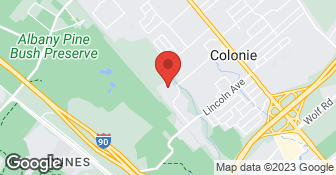 Lawn Dawg is a premiere, residential lawn care and pest control company providing services throughout New England & New York. Our Signature Lawn Care Program features custom blends of phosphate-free fertilizers with slow-release technology. This custom blend produces a beautiful, lush, green lawn. In addition to our Signature Lawn Care Program, we also offer a number of unique Lawn Enhancement Services. The Lawn Dawg Pest Control Program and All-Natural Mosquito & Tick control are designed to keep unwanted insects out of your home and protect you and your family. For a free estimate, contact us today at 518-862-2000 or visit our website at www.lawndawg.com....

Handy Tree Service is a fully insured tree removal company owned and operated by Harold Handy and Matthew Hunt. We specialize in tree removal and tree trimming. We not only use our bucket truck but also have the ability to tree climb and rig in areas where large equipment cannot go. There is no project too big or too small.  …

I called Lawn Dog only to find out they were bought up by True Green. I was hesitant to proceed but I wasn’t bound by contract for the season. The process is cumbersome. First they have to upload your paperwork into their system, mail it out to you for signature then put it back in the system before you can schedule your first lawn treatment. This first process took approximately 1 month. I downloaded the app for my phone and my initial appointment is scheduled between noon and 5pm. About 4pm I get a message that the tech is running late then 4:30pm I get another message that I’ve been cancelled. I immediately get on the phone and go through the tedious computerized phone process before I get a human and explain what happened and it’s going to be 1 week before they can get to me and they’ll take 50% off the treatment. I say ok but it never happens. 1 week later I call again and get assurances that this won’t happen again and we now book 2 weeks out and now the treatment will be st no cost to me but you guessed it, same scenario as the first time, cancelled at the last minute. I call again and tell True Green what happened and that I no longer want their services. I call Tim Brennan of Brennan’s Landscaping and he’s at the house the next day for an estimate and by the next week the lawn is treated and doing well. To top it off 2 weeks ago True Green calls me and wants to schedule my second treatment! You can just imagine how that conversation went. The moral of the story is, if you can support a local privately owned business do so.

I was very happy with the service I received from Lawn Dawg. Unfortunately, lawn Dawg was bought by another lawn care service called Tru Green and took over my contract for about the last two or three months of my service contract. I have renewed my contract for the coming year but am not ready to give a rating for Tru Green yet.

Description of Work
Lawn Dawg was my lawn care service for a number of years taking care of the fertilizing, weed control and other lawn care procedures.

The nutsage problems seems to keep coming back. I'm still seeing evidence of mole activities. Some time late summer early fall, my account was transferred to True Green, so I guess that they bought out Lawndawg. Trugreen sent me an additional bill. Since I had paid Lawndawg a year in advance, I was not happy with the extra bill. I paid the bill, but will not do business with Trugreen due to the extra bill. I don't think the grub treatment was performed as I still have the mole activity. I'm not sure if I would continue with lawndawg with a satisfactory explanation of the continuing problem of mole activity.

Description of Work
They did fertilizers, weed control and grub control. They also treated for nutsage (not sure if that the correct name but it's less green and grows at faster rate than grass). They had to keep treating the nutsage problem. The grub control is supposed to get rid of the moles. Crabgrass also made an appearance later in the summer

Lawn looks good. Some areas with issues. Concern that Lawn Dawg has been bought out by TruGreen,

Very well, We have had no ticks all summer after the spraying began.

Hi Ms. [Member Name Removed], Thank you for the positive comments. We are so happy to hear that our service has helped to protect your family from ticks this summer!
5.0

Great service, lawn looks good and the team is very responsive and helpful.

Description of Work
Lawn fertilization, aeration and over seeding.

It is wonderful to hear that we have served you well. Thank you for the feedback!
3.0

It didn’t go to good, I fired them. This is the first year I haven’t used them in probably 5 or 6 years. They responded, they just didn’t get it right. I won’t use them again because you don’t fertilize swimming pools. I’ve try to tell them year after year. They had a lot of turn over and a guy would come in and he was in a hurry, he just threw the stuff around. They did it year after year and finally I just said that was it and I will do it myself. I do it myself now. They drive around in theses, it’s like a moon buggy almost. They stand up on it and it fits through small gates, which is really convenient, but it throws the fertilizer all around. I’m sure you can do it where you want to, but you have got to go slow and careful. When you’ve got somebody that’s 22 years old and they’ve got 10 houses to go to, they probably want to get their day done. I understand that, I tried to work with them, but they just did it year after year.

Description of Work
It was for lawn fertilizing.

Description of Work
They have managed our lawn for several years. Generally happy.

Thank you for your loyalty and kind words! It is wonderful to hear that we have served you well.