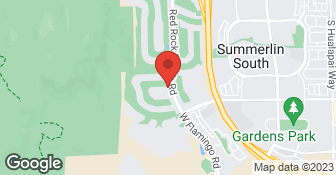 Mark is a perfectionist. When he does a job, he does it right. And unlike any of his peers, he stands behind his work, guarantees it, and actually calls a few days later to see if everything is done to the customer's satisfaction. Most unusual.

Description of Work
Outdoor lighting...he fixed what our previous handyman did, took a complicated mess and straightened it out. Installed a new transformer and now it works as it should have before. He also installed window tinting in our home that has made a profound difference in the temperature in our closets.

They did quality work, they have good pricing. They always show up on time. They do a great job.

Description of Work
I used them for handymen services.

It started when the handyman DID NOT show up at the expected time, 11 am. I called at 11:30, got no answer, so left a message. Called again at noon, got no answer, again left a message. At 12:15 he called me back and admitted that he FORGOT about my appointment. Normally, this doesn't bother me, but since the project of replacing the kitchen sink required a plumber to remove the old one and the handyman to be there to cut the countertop so the plumber can replace it, this didn't only inconvenience me but all involved. He did come out but by the time he arrived (around 2 pm) I had to let the plumbers go and do the other things they'd already had planned. As a result they didn't get to see what the handyman had done, which wasn't enough -- the plumbers had no way to clip the sink into the counter. A discussion of how to solve this problem could have happened if everything was done at the same time. As it turned out the plumbers had to cut some of the wood (which sit below the granite) to get the sink to clamp down, which required a second visit that *I* had to pay for. As a result, his "forgetfulness" cost me in the long run, in both time and money.

Description of Work
I had my granite countertop widened to fit a new kitchen sink.

We take great pride in our experience, expertise, quality, and customer service that we provide to meet the consumers needs. It is our mission to provide excellent workmanship and complete customer satisfaction from start to completion of a project. In order to understand the needs and expectations of our customers, we take great care to work and communicate with every customer in a professional manner. Our reputation is based on service, safety, and quality, regardless of how large or small the job. We have consistently focused on the needs of our customers, providing personalized attention and a stress-free experience.  …

Cabinet refacing. Cabinet refacing enables you to revitalize your kitchen with new doors, drawer fronts and matching veneer, while keeping your existing cabinet boxes. This creates a "new kitchen" look without the "new kitchen" price tag. In two to four days you can get a completely new look - subtle or dramatic. Wood reconditioning. Our unique, comprehensive wood reconditioning process (Tune-Up) makes woodwork look like new — in the kitchen and throughout your home or business. Quick and affordable, there’s no better way to revitalize your wood cabinetry. Three signs your cabinets might need reconditioning: There’s stubborn build-up on the wood, the stain/finish has worn away and lastly, there is minor damage to your cabinets. If the wood looks worn, but the cabinets don’t need to be replaced, reconditioning could be the right choice for you. Wood reconditioning typically takes less than one day, which means you can freshen up your kitchen in time for that upcoming dinner party or holiday gathering. With any service, we clean the work area each day, giving you full use of your cooking areas and plumbing in the evening. Call today for your free in-home consultation!  …

How is Sundance Estimating overall rated?

Sundance Estimating is currently rated 4.8 overall out of 5.

What days are Sundance Estimating open?

No, Sundance Estimating does not offer free project estimates.

No, Sundance Estimating does not offer eco-friendly accreditations.

Are warranties offered by Sundance Estimating?

What services does Sundance Estimating offer?