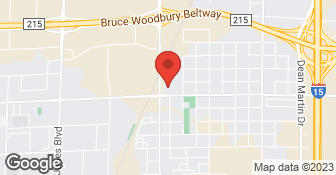 CyBr Construction is an HVAC contractor that specializes in all your cooling and heating needs and serves residential and commercial customers throughout the greater Las Vegas, NV, metro area. Our professional technicians can assist in designing an efficient air conditioning and heating system unique to your needs. We can also perform routine maintenance or replace any unit. We also specialize in other areas such as refrigeration, weatherization, custom seamless rain gutters, water heaters, Alumawood patio covers, as well as all your remodeling needs. Our capabilities include: • Air conditioning units • Heaters • Central AC • Swamp coolers • Refrigeration • Water heaters • Seamless gutters • Remodeling For more than 6 years, our staff members have been providing comfort to all of Las Vegas' homes and businesses. We are also licensed for all your mobile home needs. We believe in building a high level of confidence through our relationship with all of our clients. You can trust that we will always serve you promptly and efficiently in a professional manner. Call CyBr Construction today or visit our website now for more information! Lic #: 57873, 71759, 71896, 74817, 59152, MHD: A0077 / B0705...

Absolutely terrible. Called 3 different times and told them who I was and that I had been specifically referred to them to get the work done. This is about $6,000 worth of work. Each time I was told I would be called back to schedule something. I finally emailed them through Angie's List. Over a month later, they sent me an email asking to set up an appointment for another week out. If you are too busy, say so. Another company just got my $6,000 contract because of Cybr's incompetence at the basic skill of returning a phone call.

Description of Work
Contacted Cybr on 4 separate occasions to do repair work on my house including full attic insulation, air sealing and installation of a variable speed pool pump based on a referral I received from a home energy audit company.

It was a much better price ($1000s less) than other estimates I had recieved that told me I needed to replace my system. CyBr repaired it and was honest about the work needed.

Description of Work
They worked on my Air Conditioning and got it running again. It was not producing cold air at all.

At Controlled Comfort, we understand that we are coming to your home or business and we are grateful for the opportunity to earn your business for the long haul. We are dedicated to providing outstanding customer service, honest diagnosis, exceptional craftsmanship and excellent prices on all our repairs and installations. Our team of technicians are trained to provide you with straight forward estimates, so you're provided the information you need to make an informed decision about your HVAC equipment. We service both residential and commercial systems and offer a number of great financing options through our partners at Wells Fargo Bank and Synchrony Bank. We look forward to adding you to our growing list of happy customers. Thank you for choosing Controlled Comfort.  …

We are a multi year super service award winner! Alaskan Plumbing Heating & Air is a leading installer and servicer of high-efficiency air conditioners, furnaces, comfort controls, indoor air quality systems, and plumbing products for the commercial and residential industry. The company is committed to providing customers with unsurpassed customer service and energy efficient HVAC solutions that improve and maximize comfort within the home and workplace. Alaskan Plumbing Heating & Air is a locally owned company, proudly serving the Las Vegas Valley since 1976. We are avid supporters of charitable foundations that serve the Las Vegas community.  …

We repair all brands of air conditioning and heating equipment. We can replace and install you air conditioning and heating equipment with the most reliable units on the market according to Consumer Reports on line. We also provide indoor air quality products that will clean your air to the highest standards, remove odors, and also humidify your home at healthy levels. Our maintenance program is impeccable! We are veteran owned and operated.  …

Bonded
Insured
All statements concerning insurance, licenses, and bonds are informational only, and are self-reported. Since insurance, licenses and bonds can expire and can be cancelled, homeowners should always check such information for themselves.To find more licensing information for your state, visit our Find Licensing Requirements page.
General Information
Free Estimates
Ask for Details
Eco-Friendly Accreditations
No
Payment Options
Check, Visa, MasterCard, Discover, American Express
Senior Discount
No
Warranties
Ask for details

How is CyBr Construction overall rated?

CyBr Construction is currently rated 4.3 overall out of 5.

No, CyBr Construction does not offer eco-friendly accreditations.

No, CyBr Construction does not offer a senior discount.

Are warranties offered by CyBr Construction?

No, CyBr Construction does not offer warranties.

What services does CyBr Construction offer?