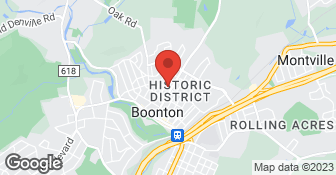 The Slevin Group Inc is a landscaping company located in Morris County, NJ capable of completing any of your landscaping needs. We have all types of landscaping equipment to complete any landscaping job of any scale. Visit our website at slevingroupnj.com ...

Overall went well. Bill and his team showed up and performed the work in a timely and professional fashion. Highly recommend!

beautiful...best my backyard has looked in years!

We thoroughly enjoyed working with you on this project and are happy to know you are pleased. We look forward to a continued relationship.
5.0

Excellent! They were on time and professional. They improved the house's curb appeal by providing screening and privacy as well. It was an excellent design concept that was well implemented.

Description of Work
They did fall a clean up, gutter cleaning and general property maintenance for winter. They also have done landscaping.

It was great they do a great job.

They do a great job, 8 or 9 years work on our property and we are a long time customer, they also do landscaping works, spring clean up for us in the past. will be having again this springtime. Price was fair on annual service.

Description of Work
Full yard clean up including gutters

Excellent work, they were able to solve my drainage problems, and did a lot of landscaping works for me as well. I hoped for a better price and they are quite pricey but for the quality of work it was fair.

Description of Work
Drainage Issues and landscaping works on my yard.

They did a great job, they did it on time, with quality, kept me updated, and asked what i prefer before the do some additional works. compared to everybody, they do more work for less charge. always reachable.

Description of Work
Fix the whole backyard, put in 2 scenic stones in the yard. Did the lighting and major landscaping project.

Description of Work
We contracted with The Slevin Group to do a variety of landscaping and hardscaping projects for our property. The work included regrading a back yard, the modification of a retaining wall, the installation of a patio, the removal and installation of a concrete walkway, and soil filling and grass seeding. Ultimately, The Slevin Group was unable to satisfactorilly complete a number of the items.

Unfortunately not every job is my best. The customer was reimbursed. We have both moved on.
5.0

Overall things went very well and the quality of the work as great. The owner Bill is reasonable and really listened to what I wanted, doing everything he could to make things look nice without cutting corners.

Description of Work
My entire front lawn was renovated. Numerous large boulders, trees, and tree stumps were removed. Fill dirt was brought in and my front lawn was leveled out and new grass planted.

The story is simple.I was searching for a great landscaping company and I found one!Quality is top notch.Even when mistakes are made or happen, the owner Bill is willing to do anything to solve the challenge. In one instance, there was ivy planted, and it was accidemtally removed, because workers thought it was an invasive weed.Once I notified Bill of the mistake, he had beaitiful climbing hydrangeas put in place of the existing ivy.It wasn't the same ivy, it was better. I totally trust Bill and his advise.

We started the process obtaining four estimates for a refreshening of our front landscaping as well as for a Spring and Fall Clean up with weekly maintenance.We chose The Slevin Group because we felt like the owner, Bill, really listened to our needs and vision for the property and was very intereactive in making recommendations for where some shrubs and plants might be better transplanted on other parts of the proeprty. Their annual contract for the spring/fall clean up with weekly lawn maintenance was very competative in price. The crew was out the day we were told they would be out and they worked really hard. The crew was very informative and sought our opinion on certain things. The entire landscaping looks amazing and we get compliments on it all the time. The weekly lawn maintenance, the crew is SO meticulous. They take the time to do things right. The office manager, Beth, just could not be happier with the level of communication. I get random emails regarding the weather, updates on that week's lawn service if the weather hasnt't been cooperating, etc. Look forward to a great year with them!! HIGHLY RECOMMENDED!!!!

Owner operated contracting business specializing in pavers, baths, kitchens, basements, rental/turnover, painting and vinyl plank flooring. Remodeling single family, multi family and commercial projects since 1995. Serving Morris, Passaic and Bergen counties. We work with your design ideas and provide cost/benefit consulting with regard to materials, time and resale value of your project. We are licensed and fully insured.  …

How is The Slevin Group Inc overall rated?

The Slevin Group Inc is currently rated 4.6 overall out of 5.

What days are The Slevin Group Inc open?

The Slevin Group Inc is open:

What payment options does The Slevin Group Inc provide

Are warranties offered by The Slevin Group Inc?

No, The Slevin Group Inc does not offer warranties.

What services does The Slevin Group Inc offer?

Are there any services The Slevin Group Inc does not offer?