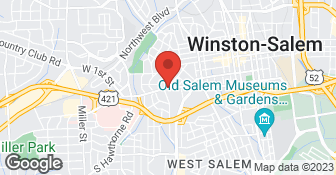 Styron Floor Covering is a family owned, local business. We've been servicing the Triad area for over 35 years. Ronnie Rule and Alan Barabe are the current owners. Both Ronnie and Alan worked for Styron Floor Covering for years before taking over the business from David Styron. We gladly offer free estimates, have financing available for those who qualify, offer discounts to anyone who mentions Angie's List upon estimate request or appointment, $100 off a minimum order of $1,500 or $200 off a minimum of $2,500. Please give us a call and we will be more than happy to help....

At Footprints Floors in the Durham-Chapel Hill area, we're a step above the rest! We are a one-of-a-kind family owned and operated flooring installation and restoration business. We have spent the past decade mastering the installation and restoration of hardwood floors as well as the installation of laminate, vinyl, staircases and baseboards. From small repairs to large refinishing and installation projects, we specialize in hardwood floors we pride ourselves on offering top quality workmanship at a fair price. One of the ways we keep our costs low (without compromising the quality of our services) is by completely eliminating the need for any type of showroom - decreasing our overhead, logistics, and staffing requirements and passing those savings directly onto you, our valued customers. For your next flooring project, make sure to connect with Footprints Floors.  …

We have the experience and dedication to bring your dreams to reality! Specializing in Carpet and Flooring services; We guarantee your satisfaction, and we won't leave until the job is done right. We pride ourselves on the quality work we provide, while delivering great customer service! Call or click for your FREE estimate today!  …

Baio & Sons LLC is a general contractor specializing in Kitchen, Bath, and General Interior remodeling and renovation. We take pride in every job as if it were our own project. We have been in business since 1992 and have remodeled over 600 kitchens and bathrooms as well as ground up construction on over 225 homes. Our staff is well educated in all stages of the construction process and highly skilled in all trades associated with the projects we are involved in. We have interior Designers that we work with if you are in need of that service.  …

He arrived as expected and made the repair.

[Member Name Removed], We are so happy you are satisfied with your repair. Please keep us in mind should you need any flooring needs in the future.
5.0

Description of Work
They replaced flooring in my sunroom (plank wood vinyl), kitchen (vinyl) and mud room (vinyl). Did an EXCELLENT job. Went above and beyond the scope of the work. Repaired flooring; cleaned and repair my bar. Actually hauled off more trash than the floor repair created. Highly recommend them.

We had an excellent experience with Styron and would certainly recommend their services to anyone looking to put in new flooring. We asked for quotes on installation of hardwood floors in our basement from several providers. Styron was able to give us a quote that was not only competitive with big box stores but was also more precise and provided more quickly. Their customer service is excellent, and they made every effort to make sure that we were happy with their services and the finished product.

Description of Work
Pulled up old carpet and laminate in our basement, repaired concrete floor underneath old flooring, and installed approximately 475 sq. ft. of hardwood floor.

Very pleased with quality of work, especially in matching with existing hallway. cleaned up, were on time.

Description of Work
Took out carpet in staircase, living and dining, installed hardwood which required reweaving into existing hardwood hallway and sanding and finishing new wood and refinishing hallway.

Alan with Styron was very nice. The only bad thing that happened was the wrong materials were either ordered or shipped so it put our installation behind a whole week. Styron contracted the work through Joe & Dee Montgomery. They were very professional and courteous.

The sales person was excellent. He was very knowledgeable of the products with recommendations. Very friendly and easy to talk with. No pressure sales The installers were very polite. They actually replaced a couple of baseboards for me. prior to laying the floor. The overall job looks fantastic .

I first contacted Alan Barabe at Styron and he has been really good at working with me about the flooring and offering suggestions. He quoted me the best price out of the 3 stores I contacted. They were the only store I contacted who had the Angie's List discount. Alan has always been good to answer my questions and return my phone calls. I also talked to Ron at the store on one of my visits and he was very helpful as well. The crew were at my house for 2 days. They were very prompt and did a great job. I had just one request, and that was that the crew could be a bit better at clean-up after they were finished. I had 2 pieces of threshold covering that had been glued and came loose (between the laminate & carpet in doorways) and Alan came right out and got that repaired within a couple of days. Thanks Styron - I'm very happy with my new flooring and would recommend them to my friends.

Description of Work
laminate flooring in my living and dining areas & hallways.

The back-splash was supplied and installed by Styron. We were able to pick from a large offering of styles and materials. I've done tiling in the past but putting translucent glass on a wall was something I wanted an expert to do. The subcontractor came on time and finished in one day. The work was done very well and the finished product looks great. As part of the same job we bought Marmoleum flooring, a brand of linoleum. We picked the color and style at Styron with the help of the owner. His subs came in a did a fine job of prepping the old pine floor, putting down a plywood substrate and leveling the surface. They also did well at laying the Marmoleum. What we are not truly happy with is the very visible seam where the two sheets of flooring are joined. The material is only available in 6' widths and we were told that there would be a seam. After the flooring is glued down the installers carve a small V in the seam and the melt a matching plastic material into this to create a welded seam. We do not have a big kitchen. In places the seam is almost invisible but the majority of it is readily seen as a seam. It draws the eye to near the center of the floor. We contacted Styron and the owner was nice enough to come out a look at the floor. He said that they may be able to do something to make the seam less visible but the repair may make the condition worse. He told us that he would be in touch to arrange for his crew to come out but we never heard from him again. Based on the remark of making things worse we have not pursued the repair. I have viewed installations on-line and in person that have an almost invisible seam (as we have on a few inches) so I have to believe that this is an installation defect. We have covered most of the seam with a rug and a table. This being said, we still like the material and the color and have a generally good feeling about the company. Just be aware that if you wish to use the Marmoleum you might want to look elsewhere for installation.

Description of Work
They installed "marmoleum" flooring and a glass back-splash in our kitchen.

Ronnie's crew was great - they took care of the flooring in the kitchen and laundry room in two days. The bathroom was scheduled for Thursday the following week - unfortunately it was pouring down rain and the materials they used could not dry quickly (we also had no heat in the house because we were replacing the heating system (Eanes Heating and Air) at the same time). That night the heat came on - things dried up quickly and on Friday morning (before Christmas) - the crew came right back out and completed the job in no time! We are very pleased with the quality of the work. Styron Floor Covering is great!

Description of Work
We recently purchased a 44 year old home which needed some flooring repaired and replaced in the kitchen and laundry room areas. We called on Ronnie Rule of Styron Flooring and he came out and gave us an estimate and helped us choose material appropriate for the home. His crew came out on December 15th and immediately set to work patching the sub-floor where needed and installing plywood, vinyl and shoemold. Before this job was completed we also discovered we had similar issues in the main bathroom of the home. We contracted with him to do similar repairs and installation.