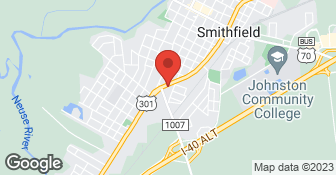 When you hire Lane’s Contracting, you’re selecting an exterior home contractor with over a decade of experience in the Raleigh and surrounding areas. Quality Builders in Wake & Johnston Counties as well as Neighboring Communities. You now know that Lane’s Contracting employs a group of talented, conscientious home improvement professionals. So, doesn’t it make sense to choose us to deal with your leaky or sagging roof, curling or missing shingles, granules in your gutter, or other problem signs that you need roof repair? Choose the contractors trusted by your neighbors and friends in Raleigh, Cary, Durham, Goldsboro, Smithfield, Wake Forest or anywhere in the Triangle and call us today at 919-631-6112. We’re ready to help in all of Wake & Johnston Counties & all surrounding areas.​...

Roof Installation Up to 2,000 Square Feet…

Description of Work
Replaced the roof

They refused the job. Said it was too small for them to handle

We apologize for the inconvenience, [Member Name Removed]. Our company generally only takes on full siding replacements, and the one piece of siding you had missing and wanted addressed was not within the realm of services that we offer, specifically for your location which is technically outside of our service area. We apologize that we weren't able to help, and wish you the best in getting your job completed.
5.0

The total experience was awesome. The pricing was reasonable and Ricky and his entire staff were professional and easy to work with. The roofers worked quickly and efficiently, putting in long hours and doing an excellent job!! I highly recommend Lanes!!!!! I would gladly use them again!!!!!

Description of Work
Due to storm damage I needed a new roof.

Description of Work
tare off and install new roof

Terrible, roof leaked around chimney, damaged sheet rock in living room and garage took them 12 weeks to get here, I had to hire another roofing company. This was during the rainy season, you can only emagine.

We're sorry to hear that you were not satisfied with the experience you had when dealing with our company, and apologize for any issues this may have caused. Upon receiving this review, we've attempted to connect with you in order to resolve this issue, but have been unable to do so. We have had turnover in our office over the years since the original service date, but from the records we do have it looks as though you had a leak in your roof in 2016 so we came out for an inspection. During that inspection, we discovered that there was a leak around your chimney from the bricks, so we addressed the issue. Two years later, in 2018, a storm came through the area and another leak occurred as a result. After you initially reached out on this matter, we were unable to connect but once we did connect, another contractor had been contracted and preformed work. At that point, as per our contract, our warranty was unfortunately voided. Nevertheless, you are still our customer, and we would love the chance to help resolve this issue in any way that we can. As we mentioned previously, we have tried to contact you on the number we have on file, but were unable to get in touch with you, so if you'd like, you can give us a call at (919) 631-6112 in order for us to connect and see how we may resolve this issue. Again, we apologize that you had a negative experience, and hope that we can be of help in the future. Thank you.
5.0

Great! Lane's Contracting kept me informed of any changes on my schedule date, they also let me know prior to my materials arriving. Was able to have the roof removed and installed in 1.5 days! Awesome work! Also, had a window installed and Gerardo was excellent to work with . I would definitely refer all of my friends and family to Lane's Contracting for any roofing, siding or window projects!

Very responsive, quick appointment, on time, polite. Ricky even told me that I could order a replacement sash directly and replace it myself in the movable pane of a single hung unit. Where there were fixed panes in similar units, he said he would have to replace the entire window, and the one next to it as well because the two windows were assembled as one unit. He said that replacing the double pane glass unit inserts was not possible in the fixed sashes. I emailed him additional information about the windows after he left as requested and challenged his advice after removing the glass from one of the fixed sashes myself. I never received a quote or a response to my emails. I have since hired a company who ordered the glass I need and will soon install it in all of the windows necessary. I feel like Ricky's advice was deceitful or ill informed. It was certainly wrong in either case.

Prior to the appointment I received an email that Otto would be in the area on a certain date. I responded to the email but did not get a response. I phoned the company multiple times and received a virtual assistant. I requested and finally received a return email that again stated Otto would be in the area on a certain date. After multiple attempts to get a real response (as opposed to an auto generated response), I finally heard from Otto via email on 10/23/18. He said he was busy but scheduled an appointment for 11/6/18. On the day of the scheduled appointment, Otto was a no show, no call. There has been no follow up on the missed appointment. This is not the kind of vendor I expect to see on Angie's List. I never found another suitable vendor.

They are a very professional company and they provide a great service from start to finish.

It was awesome, he did really great and did everything he said he would. We were very pleased.

Description of Work
They replaced my whole roof.

Lane's Contracting, Inc is currently rated 4.7 overall out of 5.

Are there any services Lane's Contracting, Inc does not offer?