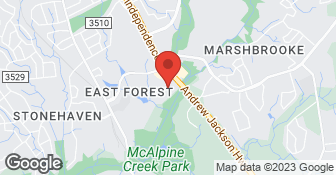 Painting and Moore is a locally owned and operated residential-commercial painting company. We offer a wide range of services. We also offer free estimates and our prices are an unbeatable value. Our painters take precautions so that furniture, carpets, walls and other parts of your home remain untouched by paints and other debris. We use only quality paints and materials, such as Sherwin-Williams and Benjamin Moore, ensuring long-lastingdurability.We can handle small or large spaces and vaulted ceilings, and we walk our customers through the entire process so that they are satisfied with the results when the job is completed. We work hard to make certain that the project is done well, and that we fulfill our customer's wishes....

DON'T BE FOOLED OF THE CHEAP QUOTE. You will NOT get quality work !!!! Hired Painting and Moore and they should have fired during the job. You are basically hiring for cheap labor rolling and holding and a paintbrush. That is it. The prep work was below subpar and experienced many things damaged and there is no respect of property. (damaged bushes, door knobs, patio steps, dead grass patches from where they cleaned the paints, wood panels) I am still finding cigarette butts everywhere, ITS GROSS!!! If you want a cheap job, these are your guys. Disrepecful workers to me the homeowner when asking questions. I was asked several neighbors from the area if I would refer Painting and Moore and I told them I wouldn't recommend because of the experience we endured. Don't be fooled by the price, you WILL get what you paid for.

This is not who we are. I can’t find this person in my database’s. My guys don’t remember her. I wanted to call her to see what was going on but I dont have her info. Very confusing/ disturbing review considering this person isn’t in our database.
5.0

I am so happy with my experience! The work was excellent. Outstanding customer service, reasonable pricing. Danny and crew did a fantastic job. I will 100% hire again!

Ben and his crew did an excellent job and finished ahead of schedule. I would highly recommend their services.

Conducted business professionally, and completed work as agreed. Had one or two minor issues, and they came back immediately to resolve the issue. That alone speaks volumes.

It took 5 days for the whole project as agreed, good communication, quality crew and friendly

Painting and Moore did a great job! Each aspect of their work was executed beautifully. My deck looks terrific!

Could not be happier with the job Painting & Moore did for us on the exterior of our home. It needed serious attention after 20+ years without paint. Corey was our project manager and was awesome to work with. He was available to answer any questions with patience. Saul was the carpenter and foreman of the crew and was a miracle worker! His work was second to none! The whole crew worked in high heat indexes without complaint, all day. We told Saul thank you for giving us our house back. They were reliable, hard working and very reasonable. We would not hesitate to hire them again!

The crew was professional and thorough, with attention to detail. They were dependable and very focused on customer satisfaction.

Fantastic! David Cantrell was very attentive, checking in daily to view progress. Juan and his team did a beautiful job. Our house looks brand new!

Excellent work by Dave and Edgar's crew!! They did a great job and will use again!! Took their time and very careful with my furniture and belongings!! Very professional and cost friendly!! Angi out did themselves with this company!!

Description of Work
They repaired several holes in my ceiling from plumbers and painted them as well.

Overall, I had an excellent experience with the work Painting and Moore did for my project. David came out to give the estimate. He took time to understand everything that I wanted done (sheetrock repair in ceiling, ceiling painted in kitchen, living room, eat-in kitchen areas and railing and touch up work. The estimate was very fair in contrast to some really high ones that I got from other painting businesses in the area. Pedro and his partner (Antonio?) came out and did an excellent job. When the paint dried, the sheetrock patchwork and paint blended in so well, you can’t tell where the sheetrock patch was located. Overall an excellent experience - I would use them Painting and Moore again.

Great communication, did a great job made the walls as good as new! Helped patch ceiling from electricians and patched holes from doors which made it look great. Had no problems with my indecisiveness on painting a wall and even offered suggestions. They were great to work with would hire again.

Superior quality and service on time! Excellent communication. I have hired them 4 times in the past year and am always pleased.

Ben came out, inspected the deck and presented a quote. I had previously communicated with them on a different project, so I felt very good about using them and immediately set up the appointment. Ben and Edgar both came out at the start of the job. Edgar was tremendous, communicating with me the whole way, replacing 4 boards in the deck which I paid for. Additionally, Edgar fixed several other loose boards as well as a gate that was malfunctioning. All work was top quality and I absolutely will bring Painting and Moore out for my next project!

Description of Work
Painting of deck

Amazing work, We have a large home, and they did a bang-up job quickly and professionally with fantastic cleanup. Their foreman was always available, polite, and professional. They repaired rotten wood and replaced hardy-board where it had been damaged. If you read my earlier review, I blasted them with an F. I had resolved to only reconsider if they ditched my account manager and sent somebody new (which wasn't an option). Ben felt so strongly about Painting & Moore that he convinced me to hear him out and give him another chance. He not only overcame my antagonism but he won me over to award him our business. Needless to say, I'm not only an avid supporter of this company, but I'd use them again in a hearbeat.

I have used this company two times for both exterior and interior painting jobs. They are excellent overall. Their crews are hard working and focused on doing a quality job. They do a good job of protecting furniture, flooring etc. from spills...very neat. I have worked with Ben who quoted both jobs for me. They were fairly priced and Ben made sure the job was completed as quoted and that I was satisfied when they were finished. I will continue to use them for future painting projects.

Mr Moore and workers showed up on time. 4 Painters were sent. They covered floors, carpets, frig, cabinets. They were there from 9:00 to 3:00 and took car ed of cracks, holes, etc then did a fantastic paint job. They cleaned up after themselves a d the house looks great. Will hire again to do bedrooms and bathrooms

Corey, the salesman who contacted us, gave us a thorough estimate in writing and explained all the services clearly. On the first day, Saul (who would become the crew chief for the following two days) pressure-washed. The crew then spent two full days from 8:30 a.m. to 6:30 p.m. painting in 90-degree heat but not rushing the job. They did meticulous work, were careful to alert us when doors had to be painted -- we have cats that needed to be shut up in rooms, so they couldn't get outside -- and were polite and friendly when we spoke to them. They also cleaned up thoroughly. Corey took full payment at the end and walked around to see if anything needed a touch-up. (We had done that the previous day but didn't see anything that needed further work.) I should also mention that the crew worked quietly; we didn't ask for that, but we appreciated it. The results could not be better: The house really "pops" when we approach it while driving up the street. The cost (which included an Angie's List discount) was $4300, which seems quite reasonable. First, it paid for two coats of Sherwin Williams Duration brand paint. Second, it bought us an upgrade to a higher-quality paint that extended our warranty from three years to five. Third, it included the replacement of rotten wood, which meant at least four boards of siding, areas on two soffits and parts of the pillars at the bottom of our front steps. We first used this company in 2012 with equally successful results, and we would certainly use them again when the house needs another painting.

Description of Work
We needed the exterior of our house painted. That meant pressure-washing on the first day, then two days of detailed work painting the upper story of our house (the lower story is brick), all doors and shutters, as well as a screened-in porch and a front porch that has an overhang and a fence along the front of it. The job took longer than usual, because we had the company put two coats on everything for extra durability.

Danny and his team did an excellent job painting my home exterior. All of the details were handled well, and my house looks like new. Thanks!

Guillermo and his crew just finished painting the entire interior and partial exterior of my two-story home. They did a beautiful job. Ben was helpful during the estimate process and very involved while the work was being done, providing clarification and direction to the painters. I would hire them again.