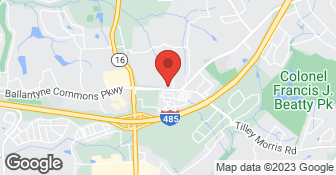 BCI is the premier leader of roofing in the Carolinas. We install quality roofing systems for homeowners that are second to none, providing a maintenance free roof, with longevity. Our installation process is extraordinary to watch as BCI is very meticulous when it comes to installing any and all materials available. That's a promise only BCI makes. We do not have old customers, we have new friends. So come join the BCI family....

Great experience from start to end - bidding process, learning metal roof features, scheduling of work, work performed and then close of job. BCI was able to give us a competitive quote to install a standing seam metal roof; Confidence in money deposited for work to be done; Understanding of the advantages of metal; Scheduling was successful dependent on weather and COVID; Installing of roofing was done about a week; Cleanup of area daily was good to end of job cleanup. Crew was friendly and responsive. Was able to perform visual inspections personally. Will update as time progresses on any future issues and followup by BCI addressing those issues. Right now all looks good. Amount spent for new roof - $28K

Description of Work
Installation of a Standing Seam Metal roof

Thank you for leaving us a review here on AngiesList. It was a pleasure working with you as well. We are always here if you ever need us! Thank you again for these kind words
5.0

They did a great job. The roof looks good. Mark called before the storm and after this last hurricane to see if everything is alright. Very please. I would recommend BCI and Mark.

Thanks for us. We appreciate your business!
5.0

They did a fantastic and first class job. Very professional and I would recommend them to others.

Description of Work
They did metal roofing.

Thanks for your business [Member Name Removed] and your faithful service to our country!
5.0

It was excellent. They were very neat, professional, on time, and the materials were premium quality..

Description of Work
They did roofing - installed new roof.

Thank you so much for the review and your business!
5.0

A small area of our roof was leaking so we called BCI. The owner Mark Bailey came out and looked at our issue and quoted us on a repair. The price was well within our budget and the work was done professionally. Quality work at a great price! When looking for a professional roofer, we highly recommend BCI roofing.

Thank you for your great review. We greatly appreciate it!
5.0

BCI Roofing installed a new metal roof on our home. The job was done on time and at a great deal. They cleaned up during the installation and after the job was completed. I would highly recommend BCI for anyone looking for a great roof at a fair price.

Thank you [Member Name Removed] for your review and your business!
3.0

I filled out a form on their website online asking for a quote for a metal roof. Over the next two days I was inundated with calls, texts and emails from guys either being vague about how they got my contact info or ALL saying they were from BCI roofing. It was super creepy and I told them all to take a hike. Apparently this company sells your contact info right away to a bunch of subcontractors.

Description of Work
Quote for a Metal Roof

We are sorry for your inconvenience. BCI roofing representatives make sure we call everyone back, and if the ball is dropped, we will pick it up and make it right.
5.0

BCI was a pleasure to work with. Very professional, high quality work, and reasonably priced. They did what they said they would do with no issues or hidden charges. Would highly recommend and use again in the future!

Thank you for your A rating [Member Name Removed]. BCI strives for perfection, quality, and punctuality. Look forward to hearing from you again.
1.0

contacted thru sears home improvement .crew came to do the work it started to rain they first went to set in work truck ,then got out to trap roof. Well the trap had holes in it long story short lost two rooms .one ceiling fell in carpet ruin furniture etc. and walls . didn't want to put in insurance claim .had a rag tag crew come in (husband and wife and 12 year old son ) plus others .didn't let anything dry out just put up insulation over wet wood. very bad work then

Description of Work
didn't have insurance coverage to cover all the damage. Ended up in law suit. Had about 50,000.00 in damages .Marks a slick talker real nice web site .but not a good professional in my contacted thru sears home improvement .crew came to do the work it started to rain they first went to set in work truck ,then got out to trap roof. Well the trap had holes in it long story short lost two rooms .one ceiling fell in carpet ruin furniture etc. and walls . didn't want to put in insurance claim .had a rag tag crew come in (husband and wife and 12 year old son ) plus others .didn't let anything dry out just put up insulation over wet wood. very bad work then opinion

Sorry for your inconvenience. To set the record straight, there was not a drop of rain in sight from the weather forecast for that day or the next three days. Unfortunately, a storm popped up late afternoon and we had just enough time to tarp the rafters. The rain came down so heavy and fast that the tarp started ponding water and eventually fell through. The reason the roof had not been sheathed was because Mr. Mosco had decided he wanted to get some insulation and was late in returning. After all is said and done, we did completely repair everything.
5.0

AMAZING PEACE OF MIND BCI completed the installation of the standing-seam metal roof and gutters on the Monday before Hurricane Matthew blew into town and what an amazing peace of mind we had through the storm. Having watched the installation and the meticulousness the crew used to attach the metal to the roof sheathing I had NO worries about any of it coming off. We had quotes from multiple metal roof installers and BCI was the most attentive to and patient with our multiple questions, before, during and after the installation. Whether it was the owners of the business, the lead installer or the gutter installer, all made time to answer questions, address concerns, etc. We had initially been told the install would take a week for the roof and two days for the gutters. The roof took a little longer due to uncooperative weather, etc. but the gutters went on in a matter of hours. One of the concerns we had prior to deciding on BCI was whether a standing-seam metal roof could be installed without removing or damaging large portions of siding as we’re in the process of swapping out cedar siding for cement-board siding. We have two dormers and a chimney already covered in cement-board siding with PVC corner boards and the installation crew was able to cut the cement-board and PVC and install the flashing under/behind with only a few minor cosmetic issues. In the two spots where it was necessary to remove the cedar siding we hadn’t gotten around to replacing yet, the crew removed the siding, installed the roof and flashing and re-installed the cedar with no issues. The other concern we had was how “complicated” our roof is, with multiple pitches (including very steep), valleys, dormers, the chimney, a skylight, etc. BCI took the job on without blinking and provided a fantastic final product. The metal roof panels lock together with the transitions at pitch changes and in valleys to create water-tight and wind-resistant system. We’ve since had many positive comments about the roof, both from neighbors and family to whom we’ve shown pictures. We are absolutely pleased with our new roof and would gladly (have already done so in fact) recommend anyone consider BCI first when thinking about installing a metal roof. Would also recommend the standing-seam roof. It’s probably a little more expensive than other metal roofs, but between the appearance (no rows of exposed screw heads), the thickness/durability of the material (NOT “tin”) and the way the standing-seams and various transitions lock together, we think it’s the better value overall.

Thank you [Member Name Removed] for your business and your positive review. We look forward to working together again in the future.

The Brothers That Just Do Gutters

The Brothers That Just Do Gutters is a fully insured, locally owned and operated. The company was established in 1999. From the beginning, the focus and determination was to create a five-star experience in the home residential and commercial remodeling construction industry. We are committed to our employees and clients throughout every phase of the solution. Call today for a free experience of getting a solution for your gutter or guard project.  …

How is BCI Roofing overall rated?

BCI Roofing is currently rated 4.7 overall out of 5.

What days are BCI Roofing open?

Are warranties offered by BCI Roofing?

What services does BCI Roofing offer?