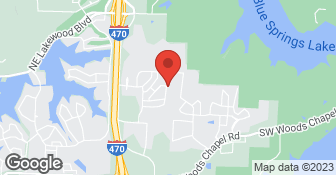 Our company specializes in home energy efficiency audits and inspections. We do the weatherization and efficiency improvement work as well as many other home improvement projects. Kansas City Power and Light Eligible Rebates for Missouri Account holders: $.30 a sq ft up to $1000.00 for attic insulation. $.08 a sq ft up to $600.00 for air sealing of home. Air Conditioners, Heat Pumps, Ductless Mini Splits, and more HVAC rebates also available. ...

Perfect! He was so knowledgeable & easy to work with. So glad I took the time to get this done! Have already recommended to several friends & fam.

Dan and his crew were prompt, professional and easy to work with. They went out of their way to help us find the right solution for us. The cost was very affordable as advertised. I highly recommend this company!

Very well. I walked around with the auditor as he performed his audit and learned several useful tips from our discussions. The file of thermal images (pictures) that he provided for identified trouble spots was especially helpful in following up to seal each of those leaks. Overall, the money we'll save in lower energy bills will quickly offset the $99 cost of this audit. I consider this money well spent.

Description of Work
Energy audit to locate air leaks in my home built in 1929.

Excellent job, very professional, and thorough in doing the analysis and reporting. Report gives lots of details, information, and recommendations.

It never happened. The company was unresponsive to me reaching out to them. Upon reading recent reviews I found that unresponsiveness was something other people were noticing too.

Description of Work
Purchased deal $99 for a Comprehensive Home Energy Audit but no work performed.

I Called 3 times he finally called me back a week later..found out my answers to my questions told him I was gonna talk to my wife and call him back..called him back to do the work 2 weeks later I'm still waiting for a call back

Description of Work
Nothing couldn't get him to call back

Great! Detailed report for our house and hired to fix.

Took a long time to finally get scheduled. Very slow to respond to emails or calls. Ad said I would be eligible for free led bulbs, shower heads, etc.. Got NONE of that. Asked for a bid for additional attic insulation. Agreed to a price, waited weeks, and then was told the price was increasing by 30+ percent.

Man was nice enough. Hard to tell. Of course they are going to find something.

Seem to go fine; however, since the appointment I have yet to see any paperwork on what the results were nor have I heard from the contractor. So far not happy!!

The representative (Dan) was thorough and knowledgeable about the work to be completed. The coast for the services was reasonable for the services preformed. My complaint with Affordable Energy Solutions is communication.Dan refused to communicate by phone. all communication had to be done via email and at his leisure. Most of the time it required 3 or 4 days for a response. If you are in no rush to have work completed then by all means try him out. Just a note, He does subcontract the insulation work, I don't think it made a difference however I would have preferred to know ahead of time. When the work was completed Dan said he would email me the receipt and documents needed for energy tax credit. After several months and emails I had to threaten to report him to Aggie's list and the BBB. The next day he did email me the requested documents along with a nasty email. My biggest recommendation would be increase staff so that communication could be returned in short order.

Description of Work
evaluated where leaks were with all of the statistics, made recommendations and came back to seal house.

It was great. The energy auditor came out and did an awesome job. He did what he said he’d do and sent us 2 reports. He gave us a few estimates and we plan on having him back to do more work for us. He was very upfront with us about the fact that part of his work was subsidized and letting us know what was available.

Description of Work
I bought a deal for a comprehensive home energy audit. We had him seal the door, put a fan in the doorway and he did a thermal scan to show where the cold air was coming into the home. He was at the home for a couple of hours, at least. He came back to seal the sill plates and spent 2-3 more hours at the home.

Very good job, owner and employee were punctual, polite, willing to answer all of our questions. House does seem t one both quieter and warmer.

They promptly scheduled the appointment & showed up on time. I received the report in a timely manner and they followed up to answer any questions but weren't pushy.

Great! Mark was very nice and professional. I got the report within a week and even though I didn't act on any of the recommendations right now, the owner was courteous and prompt in correspondence to get the air sealing finished.

The experience was a positive one; the only hiccup came when I was told KCP&L would not pay for the audit as our home is 100% electric. I was offered the thermal scan for my home anyway, which I accepted. Unfortunately, I have not received the scan yet.

Description of Work
Provided an energy audit of my home to determine if there are any areas that could be made more efficient.

The owner of the company said the price was based on the assumption that he’d get a rebate from a utility company, and I wasn’t eligible for that rebate. That was not clear from the Big Deal description. We talked further and I told him what I wanted done. He initially said to cancel the deal, but we decided to keep it in effect and he’d do the work I needed done, applying the $99 credit. He quoted me a reasonable price and I set an appointment. He sent out an employee who didn’t know what he was supposed to do, nor did he have the right supplies. He showed up an hour late and didn’t call. He was supposed to put 16 baffles in the attic over the soffit vents, but that wasn’t in his work order, so there was miscommunication between him and the owner. I set aside time to do this today, and I was very disappointed that the work didn’t get done. He did offer to do part of the work, but I preferred not to do it that way. My conversations with the owner were very professional, and he did contact me initially when I bought the deal. If this was just a matter of confusion, I might still consider using the company.

Description of Work
I bought a Big Deal for $99 for a comprehensive home energy audit.

The big deal offer seemed like a great opportunity. It did not specify where you needed to live in order to take advantage of it. Turns out it was for Missouri only, not Kansas. The gentleman was very prompt in contacting me and letting me know the situation. Rating my overall situation seems inappropriate. I was disappointed and had to take extra steps to get refunded, so I wouldn't give that high marks, but I don't believe it was a reflection on Affordable Energy Solutions.

We had a rocky start but Dan (the owner) was VERY responsive and wanted to correct it immediately. He was very prompt with his communications, handled all service work quickly. Was on time, did everything he said he would. Overall, I was pleased with his performance and we cleared up the misunderstanding.

Description of Work
Energy Audit; tested the house for air leaks; came back and sealed all windows, doors, leaks. Cleaned A/C and did some minor repair.

Dan first came to our home a couple of months ago for the initial energy audit. He spent an hour or so taking thermal pictures of our home, inspecting certain areas and running a blower door test. (He has a machine he hooks up to the front door that depressurizes the home and shows where leaks are occurring.) We found him to be very knowledgeable and as Dave Ramsey would say, he has the heart of a teacher. He encouraged us to ask questions as he went throughout the house and was not at all bothered by us following him around to see what he was doing. (I was interested in the process and trying to learn what things to look out for.) A month or so later we received very through reports via e-mail about the suggested improvements for our home. We then scheduled a follow up visit for our air sealing package. He was here a little under three hours for that and was again very open and willing to answer questions and talk things through with us. We have an older home that was not very well insulated and he was able to increase our efficiency 46% in the time he was here with simple improvements. He patiently answered each of my questions about the other suggested work, explaining what it entailed and what level of importance he would assign it. We will be hiring him again to complete a few more items on the improvement list and would definitely recommend him.

Description of Work
We used this company for an energy audit and air sealing package that were both covered by a rebate offered from our local electric and gas companies.

Welcome to MG Enterprise, LLC! MG Enterprise, LLC is a local and experienced construction company in Lee’s Summit, MO that offers a range of quality services in the area. With three decades of experience in the industry, MG Enterprise, LLC is confident in its ability to provide quality workmanship for clients. We take on jobs of all sizes, so don’t hesitate to reach out with whatever home improvement or new construction home project you may have. From kitchen and bathroom remodeling to home additions, our contractors do it all!  …

We're a Father/Son team and have been in business since 1977 and on all the major Insurance Company's preferred contractor list. We'll share with you all the technical specs and practical fixes for any problems you have and do the work ourselves. We have masonry craftsmen to call in on bigger jobs. Free estimates are available on jobs where there is a fair chance of winning your job. We're not the the highest or the lowest priced contractors, we try to stay middle of the road pricing. We won't come in and "scare" you with dire warnings about your house, but we will give you an inspection based on local codes and years of experience. We've seen it all before and can solve all chimney related problems. We've also done historic work on homes in greater Kansas City and St Joseph,and did the first round of work on the Freight House in Kansas City,as well as lots of work in downtown Lee's Summit. We also do basement repair and waterproofing such as wall bracing and backfill dirt. Waterproof paint on basements and raising window wells and epoxy basement wall cracks  …

Affordable Energy Solutions is currently rated 4.4 overall out of 5.

No, Affordable Energy Solutions does not offer warranties.