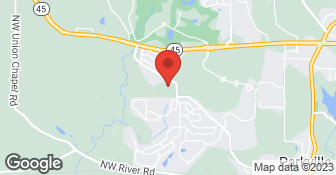 Description of Work
They were the salesmen that sold me the contract to put on a new roof on a house that I bought to rehab and resell. They subcontract the actual roof labor for the installation, and my issues are not in any way with the installers. These two guys, Stean and Alex, are a father-son duo who can go from being your best friend and congenial to angry and verbally combative in less than 60 seconds. At least Stean can. If you have to speak with anyone, speak with Alex, though he is learning from a terrible example.

We were not real happy with their services. they did not clean up well and they got in another carpenter to do some work and his work was marginal.

First and foremost, the homeowner wanted us to give them a estimate on the roof. We told them we could possibly get their insurance co. to try and pay if they wanted, we could help them with the process of doing so.Their gutters were falling off the house, and holes in the soffit and rake areas where squirrels have eaten holes in their house all over. The shingles were so deteriated from improper ventilation,trees, and soffit intake,plus they have large trees overhanging the roof.We met the insurance co. at their house and got them to pay for 100% for the complete roof and gutters. They originally told us they didnt have any damage!We completed our job on time and cleaned up as well as we could.They have never done any yard work around their house prior to us getting there as there was 3" of leaves all around the house,along with sticks. The carpentry work was more than satisfactory in that they only wanted partial work done,trying to match existing wood repair instead of replacing all, they didnt have the money to fix the best way just here and there and we told them it might not match when you have old wood with new! I have had the same carpenter work on my house and many others, and got nothing but great reviews and thank yous! We feel we did our job as best as we could given the circumstances and never got a thank you for helping them get the insurance co. to pay 100% for the roof and gutters. We take a great deal of pride in our work on every job we do to make sure the homeowner is satisfied.We strongly feel this was a unfair report grade they have given us.There are 2 sides to every story, Thank You

We're a Father/Son team and have been in business since 1977 and on all the major Insurance Company's preferred contractor list. We'll share with you all the technical specs and practical fixes for any problems you have and do the work ourselves. We have masonry craftsmen to call in on bigger jobs. Free estimates are available on jobs where there is a fair chance of winning your job. We're not the the highest or the lowest priced contractors, we try to stay middle of the road pricing. We won't come in and "scare" you with dire warnings about your house, but we will give you an inspection based on local codes and years of experience. We've seen it all before and can solve all chimney related problems. We've also done historic work on homes in greater Kansas City and St Joseph,and did the first round of work on the Freight House in Kansas City,as well as lots of work in downtown Lee's Summit. We also do basement repair and waterproofing such as wall bracing and backfill dirt. Waterproof paint on basements and raising window wells and epoxy basement wall cracks  …

ALL TYPES OF RESIDENTIAL & COMMERCIAL ROOFING,GUTTERS,SIDING.WE DO REMODELING OF BATHROOMS,BASEMENTS,KITCHENS, DECK REPAIR AND REBUILD,LANDSCAPING,ROCK WALLS, SNOW REMOVAL NORTH OF RIVER. WE ACCEPT VISA,MASTERCARD,AX,DISCOVER CARDS. SENIOR AND MILITARY DISCOUNTS, NOT VALID WITH INSURANCE CLAIMS.

How is All Season Roofing overall rated?

All Season Roofing is currently rated 2.5 overall out of 5.

What days are All Season Roofing open?

All Season Roofing is open:

What payment options does All Season Roofing provide

No, All Season Roofing does not offer eco-friendly accreditations.

Does All Season Roofing offer a senior discount?

No, All Season Roofing does not offer a senior discount.

Are warranties offered by All Season Roofing?

No, All Season Roofing does not offer warranties.

What services does All Season Roofing offer?

All Season Roofing offers the following services: ALL TYPES OF RESIDENTIAL & COMMERCIAL ROOFING,GUTTERS,SIDING.WE DO REMODELING OF BATHROOMS,BASEMENTS,KITCHENS, DECK REPAIR AND REBUILD,LANDSCAPING,ROCK WALLS, SNOW REMOVAL NORTH OF RIVER. WE ACCEPT VISA,MASTERCARD,AX,DISCOVER CARDS. SENIOR AND MILITARY DISCOUNTS, NOT VALID WITH INSURANCE CLAIMS.