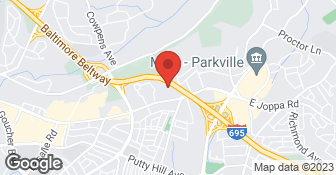 We have been roofing and doing home improvements for Baltimore since 2001. We complete most roofs within one day. There is never a leak, not once.

We needed an entire porch roof replaced and this team came and got the job done quickly and professionally. They were not the cheapest game in town, but their prices are fair and the quality of work, timely manner in which it was done, and professionalism was well worth the couple of extra bucks! Not only was the job done well but even the cleanup was handled so well! They even made sure my flowers were not injured during the repair. Most satisfied!

Description of Work
Roof and siding replacement, including window wrapping and gutters and down pipe installation

I've used Brian, and All Work LLC, on multiple occasions for some minor home repairs, and I would absolutely use their services again. Fair prices and great communication, are just two of the reasons why. I would highly recommend, and have done so to other family members as well.

Prompt, efficient, neat and I was charged fairly. Will continue to use the services of this company.

Description of Work
Installation of two new toilets and repair work on the main water supply to the house. I was also quoted over $10,000 to replace my entire HVAC system at which time All Work sent their man who assessed the problem and repaired it for under $200.

Everything went well. All Work LLC worked with me and gave me a reasonable price and good product.

Overall, a bad experience. All work was eventually completed to satisfaction, but with multiple difficulties along the way. The company uses sub-contractors for everything and the owner is usually not there to supervise them. He won't give you the names of the subcontractors when you ask. The exterior painting, drywall, and interior painting was excellent quality, but the contractors left paint chips all over the yard and washed their equipment with my hose into the outside drain, which clogged up the drain. The owner complained to me about money problems, even asking me to pay for materials up front which was not what our contract specified. The windows were installed fine and in just one day, but the outsides were not wrapped in aluminum as was written in our contract. (see picture) The contractor wanted to be paid first, then come back "later" and just paint the messy caulk on the outside of the windows. When I insisted, he did end up doing a nice job wrapping the sills. The subcontractor who installed the ceramic tile in the bathroom did not reinstall the toilet properly, and the seal leaked for quite a while, requiring four return visits until it was fixed. The owner was always looking around for other jobs he could do and giving me a quote for them when he hadn't finished working on the first project. He missed an appointment with an inspector and told them over the phone where the key was hidden and to let themselves in. We used my garage for window storage and unknown to me, he stored windows for another job there, too. When his subcontractor came to get the other windows, he left my garage door unlocked and wide open all night and the whole next day. Then the owner repeatedly badered me to give him the garage key again. He substituted one type of kitchen cabinet that I had ordered with another type without asking me and when I pointed it out said he didn't think it was important. The screen door he chose was cheap, does not close all the way, and the screen is always getting pushed out of the spline. The electric subcontractor really messed up, hooking up the wires the wrong way which caused the outlet to trip itself frequently and refuse to reset. After a month, three tries to fix it with different electricians, and asking for more money and telling me that it was my fault because I wanted him to do it the cheap way, I told him to forget it. My husband ended up removing the service panel himself and discovered the outlet was not properly grounded and the wires were all melted and blackened. We repaired this ourselves because we just did not want this contractor coming back to the house for anything.

The two faces of people...wow. Its a terrible shame Im just seeing this (a sarcastic "Thanks Angie's list"), because who knows how many customers this has costed us in the slowest time of my 17 years doing this work. How do you give me an F when your [Member Information Removed] sentence is "All work was eventually completed to satisfaction". I hope you meet the guys that just runs with your money one day. Im quite the opposite, I always stay till the job is right. We installed all new windows (21!) on her property (inspected by lead inspector) and apparently we did such a horrible job she had to contract with us to do another $15,000 of renovations...and kept adding on too as we went...?! Sure we had problems and difficulties, thats par for the coarse especially when the house was built in the 20's and had been tinkered with, added onto, and converted into THREE apartments by who knows...? We did the best we could with what we had to work with, and ultimately "All work was eventually completed to satisfaction" "The exterior painting, drywall, and interior painting was excellent quality". She said we left paint chips. But the house was inspected by a county Lead paint inspector and approved! So if something was missed, it was small. And also...still not enough to NOT contract with us again. Her outside drain was clogged with mud and sand, not paint. I know because I flushed it for her myself with a hose after she showed concern. My guys only washed their brushes (which is where they are supposed to wash them) and didn't pour any paint down a hole like she makes it sound. "The owner complained to me about money problems, even asking me to pay for materials up front which was not what our contract specified." The program she went thru, like many bank funded renovations, did not offer a deposit. So I had to pay for ALL her windows (21) AND install them BEFORE I got ANY money! This is the thanks I get for putting her on my arm. Some people...smh Most customers help us with the material cost and get repaid when the bank approves the [Member Information Removed] draw, fyi. Wrapping original wood work was indeed in the 'form contract' from the program, I always recommend against hiding beautiful wood work and painting instead for the same cost. Its a bit more maintenance down the road, but worth it in my opinion. It was a mistake to cover that with metal, especially on that gingerbread-looking house. Im sure the original carpenter rolled in has grave. But hey she was the boss. You make it sound like I tried to strong arm you. Not the case. I have always used subs because housing employees sends costs thru the roof for my customers. Most people like that. I also do not micro manage my men, thats why they are loyal to me and we can work together. When a problem arises I always answered the phone and take steps to resolve it. Did we just not finish fast enough for you? As for the electrical and plumbing issues you refer to. I had the best and most qualified people (all licensed masters) on your job for those problems. I have resolved to think that maybe the affair gone sour you had with the tenant in the basement might have something to do with it. He was a contractor too and I think upset you didnt hire him and was melting the wax ring on the toilet from below. 3 plumbers, no other answer. I know it sounds crazy but the problem subsided after he moved out...just sayin yep we left the garage open once accidentally with all my 23 windows in it that i paid for and i was responsible for, so really no skin off her nose even if we had lost something. 21 windows were her's and TWO were for another job, all delivered at once from ohio. Shes just gonna have to learn to deal I think. Anyway you get the idea I hope. Just not a good person. But lastly, there is no way you are making me responsible for the electric in that building. Your father and husband and who knows who else put that crap together. You were cheap the whole way and didnt want to fix what i told you you needed. Im glad you finally decided to do something about the electrical in whole, even if it wasnt with us. The problem outlet was ALSO in the man's basement apartment whom was upset with you for some reason, dont forget. Makes me wish there was a website to warn contractors not to work with certain customers... What an ungrateful, back-stabbing, bummer of a lady. Geeze.

Excel is a family owned and operated company based in Harford County. We have been in business for 17 years and we're still going strong! Right now we are promoting our new referral program! If you refer someone to us, and they choose our company, we will give you a referral check from the sale!  …

Maryland Pro wash is an independent locally owned small business. We have been in business for over 10 years. Maryland pro wash is one of the areas only contractor using the industries latest and most advanced soft wash technology. We also go by MPW Painting and MPW Basement remodeling. Our MHIC #103189.  …

How is All Work LLC overall rated?

All Work LLC is currently rated 4.3 overall out of 5.

What days are All Work LLC open?

All Work LLC is open:

What payment options does All Work LLC provide

Does All Work LLC offer a senior discount?

No, All Work LLC does not offer a senior discount.

Are warranties offered by All Work LLC?

What services does All Work LLC offer?