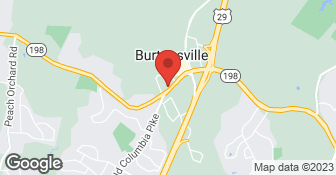 Family owned business. We have financing options for most projects and special promotions based on your project and the time of year....

Johnson’s Landscaping Service, Inc. is a family owned and operated full service landscaping company serving residential and commercial clients of Northwest DC and Montgomery County since 1960. Our passion is to build a strong company, with great people providing top quality service. We enjoy the challenge of solving our clients' landscape problems. Our clients report that the combination of the following three things help us stand apart from the competition. 1. Reliable, family owned and operated since 1960. 2. Skilled, experienced craftsmen. 3. Creative solutions and custom building. Learn about our "proven process" for solving your landscape problems. Start enjoying your outdoor space. Contact us today for a free estimate.  …

I had chase replace my roof and put in some shingle vents in July 2019. Just over $11,000.00. During the roof install they damaged the gutter in the rear of my house. This gutter is now bent and a low spot so it does not drain properly. Also the Screen over this section does not fit (due to gutter damage). I e-mailed Dave Friesorger The Production Manager. He said he would submit a work order and they would come and take a look. Dave stopped responding to my e-mails and phone messages. I do not recommend chase - my experience says they will not stand behind their work.

Mike was professional, he gave a no-nonsense pitch and quote. There was no heat lamp demo or high pressure sales tactics. They replaced all my windows with Oknas and added a storm door. All work was done well and we are very satisfied. I have already contacted them for another job.

Very good. Very professional, quite expensive but I think it was a fair price for the scope and quality of work proposed.

Description of Work
Requested quote on kitchen remodel after personal referral. Mr. Chase personally came to our home. Great ideas from his design staff. Visited show room, really liked everything we saw. Bery high quality cabinets and workmanship. Way above our price range, however, do didn't go with him.

The company did an excellent job. The painters cleaned up each day when they finished working and left the house very neat. I was very pleased with the the work and the final product. There was a mix up with the paint colors but the problem was immediately resolved once it was pointed out. One bit of advice..., When getting an estimate be sure to clarify what work is included in the estimate . I was not aware that painting the doors was not included in the estimate, The cost for painting the doors was an additional $50 per door.

This was our fourth time using IHE, and the work was well done, as we had expected it would be. The first guy they sent to give a roof estimate seemed inexperienced and unprepared to evaluate our roof, and we were ready to go with a different company. But then IHE sent someone else who gave us a professional--though overpriced--assessment of our roof. The work is complete and the roof looks great. The other jobs we had with IHE gave us good quality for a good price. We definitely think this job gave us good quality workmanship, even if they overcharged a bit.

Michelle did a great job a designing the kitchen to allow for more storage space. She was very helpful with the cabinet selection. When it was time to select the bathroom vanity and kitchen counter top, I came back to Insulators Home Exteriors after visiting several other places. Once again Michelle was a great help. Because the kitchen was so small, she was able to find a remnant stone that could be used for the counter top. Communication was excellent. She kept me informed via email and text about the status of my order. She also did an excellent job of answering my questions and making helpful suggestions. I will definitely considered Insulators Home Exteriors the next time I have a home improvement project.

Description of Work
I was renovating my home and was referred to Insulators Home Exteriors for the kitchen design and cabinet selection. The house was a row house in Washington, DC with a very small kitchen.

Bob Chase came out for information and estimates, and was very careful and precise with what he then shared with us. Planning and organizing and showing up when scheduled went smoothly -- we were very pleased.

Description of Work
Entire roof and top of our house had to be redone -- from major mold problem -- they were wonderful for this! They also did a beautiful stone patio for us, and a beautiful stone front walk and steps. I would use them again any time!

They did a great job. They made sure that water would drain away from the house and off the patio from all angles. John was the project manager and was extremely professional. He help with the design of the seat wall and it came out beautiful. I could be happier with end results. There wasn't one thing that I had to correct. The cleaned up everything. It did take over a month to complete due to weather. During hurricane Sandy they made sure that everything was covered with plastic and then promptly came out and drained all the water off. I highly recommend the company and John for installation of a patio. A friend of mine also used the company for a patio and was extremely pleased.

Description of Work
Had a beautiful paver patio installed. The removed an existing cement patio and stairs that had settled towards the house causing a problem with my basement wall. They installed an 18 x 22 ft paver patio with curved seat wall, one large step to the house, and a walkway to the back gate from the patio. Lighting along the seat wall was also included.

Insulators replaced my front steps in the summer of 2010. It's 2 sets of steps, at a right angle, and a landing at the top and in the middle. Over the first winter, the bottom steps had begun to deteriorate. After many, many calls, someone finally came out and agreed that the bottom steps, below the landing, were crumbling and needed to be replaced. That was done in the summer of 2013. During this past winter, the top steps started to crumble, too. I called starting in February and at least once a month since then. Each time I was told they would and quot;put in a ticket,and quot; but I have heard nothing back. Now it's getting late in the year and i don't think the steps will make it through another winter. Concrete steps should last more than 3 years! I have been very careful about maintenance, particularly not using ice-melt that can eat concrete. They simply didn't last.

Everything was very professional, from the first guy to come give us an estimate, to the fact that the workmen turned up when scheduled (even though it was lightly snowing!), and did the work in an efficient and timely manner.

Description of Work
Replaces all our storm windows and doors, and replaced all the basement windows with new insulated windows.