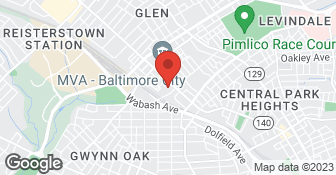 Abbey Fence & Deck Co., Inc., boasting one of the area’s largest and most versatile facilities, has been serving metropolitan Baltimore with pride for over 50 years. Family owned and operated, our guaranteed workmanship has added distinction – privacy – and security to thousands of homes, businesses, government and industrial sites. Prior to 1985, Abbey Fence Co., Inc. concentrated predominately on residential fencing. In October 1985, Fritz Fence, a well known and respected company in the commercial and industrial market, was acquired. It was a perfect fit and today, Abbey-Fritz Fence remains dedicated to providing quality materials, labor and professional service at competitive prices. Abbey-Fritz Fence is a member in good standing of the American Fence Association and the Associated Builders and Contractors Inc. We are extremely proud of our charitable endeavors as well. Materials have been donated to Grant-A-Wish Foundation at Johns Hopkins, the Ronald McDonald House and the Compassion Center in College Park, MD....

Unfortunately, this company fell very very far short of the expectations I had. For starters, I had some concerns about getting a permit from the county so I called after my initial payment to discuss potential changes to fence layout and received no reply for a month. The next interaction was the afternoon prior to the installation saying the contractors would be here the next day. The biggest issues is with the extremely poor quality of work. After the initial install I found concrete and loose dirt left around every fence post and throughout the entire yard. Additionally, there was a saw blade left in yard. Throughout the entire fence there are staples shot in hard enough to break metal wiring. On top of this they actually installation part of fence in the incorrect location, even though I walked the perimeter of the fence prior to install and showed them exactly where everything should be. During the installation process I was unable to communicate at all with contractors due to language barrier and general unfriendliness. This wouldn't have really been an issue if there wasn't an accident on the job and if they had installed the fence properly. Once I inspected the fence after the install I called to raise concerns about work quality and was told I would hear from someone that day. It wasn't until 3 days later with an early morning phone call did I find out someone was coming to take a look at the fence. I was told same crew wouldn’t come back and I would hear from someone early the next week to see about next steps. After the weekend the same contractor showed up with no call to alert of arrival, just showed up. The contractor didn’t seem to be shown photos taken during previous visit and had the nerve to argue with me about the location of the fence and quality of work. Said I was home all day so I should’ve come out and asked them to clean up and tell them the fence wasn’t installed correctly. I work from home so naturally I wasn't monitoring the contractors to make sure they were doing their work correctly. They did move the fence to the correct location, but didn't clean up the rest of concrete around the yard and left more garbage around the yard (water bottle, pieces of metal, chunks of wood, etc). After walking around the yard with the contractor I pointed out some concrete left around some of the fence posts and he told me "it's fine" and picked up the concrete to throw over the fence. There's concrete smeared up the fence posts and wooden planks all over the fence. The real icing on the cake is my brother's 60 lbs pit bull was able to crawl under part of the fence so now I'm going to need to go secure parts of the fence to make sure animals can't crawl under the fence.

Abbey did an excellent job. Started 2 weeks ahead of schedule. Installers were friendly. We discussed options on the best way for the gates to open based on the slope of my yard and other landscaping nearby. I'm completely satisfied with the results.

Thank you for the kind review! It was a pleasure working with you on your project!
4.0

I wish I could explain it. I called Abbey Fence and Deck last week to request a quote for a deck extension with composite deck boards. They quickly put me on the schedule no problem. Flash forward to today. The guy started measuring my existing balcony and asked what I wanted and as soon as I started explaining that I wanted to expand the deck out into the yard and across the back of the home, he started making excuses. He said they only had white rails no black, he started telling me about another job where he was waiting since September (it’s now March) for materials. He went on to say it would be August when he could get black railings. Then I said ok, if you can’t do the job I understand. So he took all his measuring tools, including a huge walking measuring wheel and left. It was very odd. Why didn’t they tell me when I called that they were low on parts or had a backlog on projects due to lack of materials. Needless to say, I called Wold Home Products, one of the companies he said they use and get this....The customer service rep said they have plenty of black aluminum railings. She even went on to tell me to have the contractor ask for the Westbury Tuscany #C-10. When I read reviews I take what people say with a grain of salt, especially if they are the only negative in a sea of positives. Trust me, I wasn’t asking for anything special or extravagant, just a simple deck. It was truly odd.

Description of Work
Waste of Time

We're sorry that we didn't have the opportunity to help you with your deck project. Regarding the railings that you were interested in, we purchase our Wolf branded materials from a regional distributor. Wolf does not deal directly. The lead times and availability that your estimator quoted were based on the information provided by our supplier. Customer service and satisfaction is the key to our success and we apologize for any confusion caused by the conflicting information. Please let us know if we can assist with anything in the future.
2.0

At first it was great. They were on time, finished quickly, etc. Everything was great. Then a year passed and the posts started rotting. They replaced 1 or 2 for free. The following year, more post rot. Again they replaced them. After about year 3 or 4 they threw in the towel and I was on my own. Now at roughly year 10, I have 9 posts to replace this spring. Keep in mind I've been replacing on average 3 every year. My assumption is they just do not use pressure treated lumber or lumber rated for direct ground contact. So long story short, the fence was great for the first year, then after that, the posts just rotted away. Within roughly another 5 years I estimate the entire fence will have been replaced.

I'm sorry to hear that you were unhappy with the materials used for your fence project. Regarding the lumber used, Abbey has patronized the same lumber mills (also used by our counterparts in the area) for many years and they have always provided consistent quality in their product. However, untreated lumber such as split-rail is naturally susceptible to environmental conditions such as excessive rain and/or damp conditions that can lead to premature aging and while Abbey strives to provide exceptional customer service, as demonstrated by replacing the first posts, this is technically an issue that falls outside of your warranty. As a previous customer, we would be happy to work with you on a discounted price for the repairs. Please feel free to contact our office so that we can schedule a time for one of our field superintendents to do an on-site inspection with you. Sincerely, Abbey Fence & Deck.
5.0

It was a great experience from beginning to end! Our Sales guy Chris made us feel comfortable, answered all of our questions, and was helpful throughout the whole process! The men that came to instal the fence were polite, friendly, and did a great job!!! Its amazing to see our vision come alive! We LOVE our new fence and would highly recommend!

Description of Work
Front and back yard fence

Thank you for the kind review! It was our pleasure working with you!
5.0

Had a estimate given for fence installation .

Description of Work
Very well! Our sales man Chris Schway was very knowledgeable, polite, friendly, informative, and honest. We had a positive experience with his sales technique and with the product he was providing. We had 2 other companies give us a proposal and neither met the standard that he provided!

Awesome! We are glad that we could help you with your project. We appreciate the great review!
5.0

From start to finish my experience with Abbey Deck & Fence was superb. Salesman Chris was personable, patient, professional and very accommodating. Price was competitive and after seeing the craftsmanship it was well worth it. I will recommend Abbey Fence & Deck to all who are searching for quality fencing.

Thank you for the great review! We will pass the compliments on to Chris! We enjoyed working with you on your project.
1.0

Never showed for estimate , not a reliable company

Description of Work
deck and fence

I don't understand why, but David Novac from Abbey Fence & Deck came out to my property on June 19,2020 to look it over in order to give an estimate of cost. Upon leaving he stated "I'll get back to you". When he failed to do so I called the number given to me printed on his business card. Same response "I'll get back to you. After the third try I gave up. Its August 5th 2020 , still no call back and NO reason WHY???? BEWILDERED

Description of Work
wanted a wrought iron fence put up along with a wood privacy fence.

We apologize for the delay in getting you an estimate promptly. These turbulent times have led to an unprecedented volume of leads and we are striving to do our best in servicing all of our customers. Your original estimator has been made aware of the situation and will be following up with you. We appreciate your patience!
1.0

I requested to have an existing fence (that they had previously installed) moved & reinstalled to expand the yard. First, they are terrible at giving you much notice of when they are coming as I would have made arrangements to be home to supervise if I could have. After the install, I noticed issues & contacted them immediately. They left a deep fence post hole open in my yard and there were large gaps between the wire mesh of the fence & the ground, making it very insecure (the existing fence is secure to the ground). In addition there are several nails just sticking out that are not even holding anything in. I have called & emailed several times, only to be either ignored or given the run-around & excuses and no one has actually fixed the issues. It took them a week and a half to even send a service tech who did not fix the wire mesh issue, which was my main concern. (I had already filled the fence post hole, as apparently they were just going to have me leave that open for someone to injure themselves in during that time.) For a company that claims they are about customer satisfaction, they clearly are about just taking your money even though the job is not finished completely or properly. Horrible customer service from Abbey Fence. Take your business elsewhere.

We're sorry your initial interaction wasn't satisfactory. However, we have reached out to you and have since resolved the issue!