Around The Clock Home Service 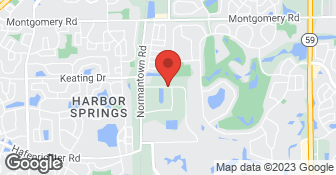 It went very well. They carved out some windows for us. They are great, the guy that came out was fantastic, and he was very honest. My wife liked him a lot so it went well.

Description of Work
I used Around The Clock Home Service for carpentry works.

Two gentlemen showed up at my home last week to remove two lights and replace them. They were also supposed to lengthen the chain and wire on another light but did not have the tools to do so. They placed wire nuts on a front light that had shorted out. I was charged for two hours' work at the rate of $170 for the first hour and $120 for each subsequent hour. I paid $300 total ( $10 change included to be credited for future services) and am still waiting on the receipt. The owner of the company also agreed to install a chandelier from my 18 foot ceiling at a later date, assuring me he had the proper height ladder for the job. The chandelier was purchased from an online source. Around the Clock agreed to remove the chandelier from that residence and transport it to my home and install it the same day. When the crew arrived with the chandelier they could not install it in my home because they only had a 12 foot ladder. The tallest they owned. They insisted the ladder was 16 feet tall. I measured it in front of them. It was only 12 feet tall. Let me reiterate that the company owner was aware that I have 18 foot ceilings and assured me they had ladders to reach that height. It was difficult to communicate with the employees because English is not their first language, as they are Mexican immigrants. The crew left to find another ladder to no avail. They told me they would return the next morning to install the chandelier and asked me to call the owner. I called the owner immediately and was told they would NOT be back the next day to install the chandelier. He told me the light would have to sit on my floor for over a week. The light is substantial in size, at approximately 4 feet X 5 feet, so it is in the way for certain. He also mentioned renting a $1,500 piece of equipment to install the chandelier. Bear in mind that previous to this I was told they had ladders tall enough to complete this work so you can imagine my surprise. The owner also accused me of lying about the height of our ceiling. I told him that I also measured it with his crew and it was, indeed, 18 feet high. He stated that his ladder was 12 feet tall and his worker was 5" 7" and should have been able to reach the 18 foot ceiling and that there was "something I was not telling him". He became irate and insulted me personally. Immediately thereafter, I received an "invoice" from this company via email. The owner charged me an hourly rate ($170 for the first hour and $120 for subsequent hours) for his crew to drive from Naperville to Hinsdale, BACK TO NAPERVILLE, then to Joliet. He then charged me an additional hour and a half for his crew to drive around in an attempt to find a ladder taller than 12 feet. A ladder the owner claimed he already owned when I contacted him for the work. I was also unaware that I would have to pay for their trip TO the job as they had not charged me thusly the first time they came to my home and I was not made aware of this by the owner. This amounted to $170 just to drive to the job site. Further, I am flummoxed that he actually thought his employee would stand on the tippy top of the twelve foot ladder to install a 50 pound chandelier when the employee's hands barely grazed the ceiling! He spent an inordinate amount of time trying to explain how a 5' 7" man should be able to reach an 18 foot ceiling with a twelve foot ladder, going into great detail about arm length and such. Not even an acrobat from Cirque du Soleil is capable of such a daring feat! This is when he accused me of lying about my ceiling height. I kid you not. Additionally, when the crew removed the chandelier from its original location they severed the wires, rather than remove the entire fixture from the ceiling, meaning I now have to pay to have the wires soldered. I was told by the owner and his employees that they "buy" the ladder from Menard's or Home Depot then return it after the work is done. I have to admit that I began to doubt their integrity when they told me this. What other types of dishonesty are they capable of? Ultimately, the owner is charging me almost $600 for work they could not complete. Merely to transport a light fixture 25 miles. Of course, I dispute such an outrageous amount and requested an adjusted invoice. The owner has sent me several threatening letters in the past 24 hours claiming he recorded our conversations (illegal in the State of Illinois without my consent but it WOULD prove his outright falsehoods). He also threatened me with fines of 25% in seven days time if I do not pay him in those seven days, which is also in violation of IL law. Bear in mind he sent me an "invoice" fewer than 24 hours ago. Little more than a dishonest, unprofessional bully. I urge you to avoid this company at all costs.

Description of Work
Installed two interior lights and capped two wires on a single outdoor light. Removed large chandelier that I purchased and transported to my home.

This review left for us is false. This customer has never paid bill.
5.0

Great Company!! Ben was very trustworthy, we felt comfortable with him around our dogs and leaving him alone in house. What I liked best was the pricing and honesty. They came up with ideas that no one else could, to get the best results for our home!!! Great company that is a one stop shop that does EVERYTHING with homes!!!!!

Bazan Painting Projects is a full service company that offers a wide range of services and expert advice. Ray Bazan, owner of Bazan Painting Projects, has over 10 years of experience in the painting industry, considers himself an expert in the field and takes great pride in what he does. Satisfying our customers is a business philosophy we practice and emphasize. We take pride in our attention to detail and understand the importance of a job well done, which includes all aspects of the project from start to finish. We guarantee to get the job done right and we will work hard to make sure we exceed your expectations. We use only the finest tools and materials. We ensure that surfaces are properly prepared before starting any job and special attention is given to cover and protect areas that are not being painted. We take special care of each job and possess the necessary skills required in understanding the wide range of paint coating varieties, as well as the ability to diagnose and solve the unique challenges of each project. In addition, a thorough cleaning is given at the end of each workday. Please contact us for a free estimate and paint consultation. We are confident that you will find our prices fair, affordable, and competitive. We appreciate your interest and look forward to earning your business.  …

CertaPro Painter of Naperville is a veteran and locally owned and operated business. With every painting project, we're committed to providing the highest quality work and professional service in the area. Residential painting or commercial painting, we're dedicated to the process of certainty - of a job well done. Whatever your needs, big or small, CertaPro will provide a professional quality paint job and an experience you'll be thrilled with. That's our promise, that's Certainty.  …

Frequently Asked Questions & Answers about Around The Clock Home Service

How is Around The Clock Home Service overall rated?

Around The Clock Home Service is currently rated 4 overall out of 5.

What days are Around The Clock Home Service open?

Around The Clock Home Service is open:

What payment options does Around The Clock Home Service provide

Does Around The Clock Home Service offer free estimates?

Does Around The Clock Home Service offer eco-friendly accreditations?

No, Around The Clock Home Service does not offer eco-friendly accreditations.

Does Around The Clock Home Service offer a senior discount?

Yes, Around The Clock Home Service offers a 5% senior discount.

Does Around The Clock Home Service offer emergency services?

Are warranties offered by Around The Clock Home Service?

What services does Around The Clock Home Service offer?