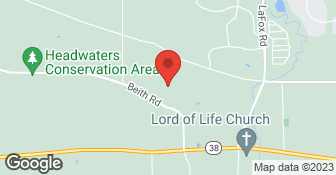 Family owned and operated, it has been in business for over 10 years. We focus on excellence and personalized service to provide the highest quality design and installation on heating, ventilation, and air conditioning systems.

Excellent. Andrzej is very congenial, professional and takes time to not only inspect the work needed but also to check out surrounding areas for any potential issues. He takes the time to explain what he is doing and make suggestions for improvements that you may consider. He does not push you for any additional work than needed and provided options for work I wanted to consider. All around great experience!

Great. Andrew (owner) suggested type of the heater and explained differences between different types (heaters that use inside vs outside air supply). Work was done with great care and attention to detail even where cosmetically not important. He demonstrated how to apply pipe threat compound properly without causing excess material to be pushed inside of the pipe. He checked some of the old gas supply pipes and fixed the connections where partial blockage was occurring. Even though this would usually go undetected by homeowner, Andrew spent extra time and effort to do job right. He is the only person I would call for heating and cooling repairs and install.

After attempting a new construction I quickly became accustomed to contractors being either behind schedule or not showing to work. Luckily Andy (Andrzej) of Aand K heating and cooling provided a nice change of pace. Not only did he show up when asked and agreed but also he was able to finish slightly ahead of schedule. In addition he has cooperated with other servicemen without any hassles, moreover the other contractors also had positive comments (which is almost unheard of, since most everyone blames the work of the guy before for any failures or shortcomings). Everything went smoothly and the house is almost ready. Last week when there was a failure of AC system due to clogged filters Andy came in to the rescue over the phone. He showed up later after his last appointment to verify what was the cause and he fixed the problem on the spot. It is also worth mentioning that I started using him as my regular Hvac service for my business. Thank you Andy. I will definitelly recommend his services to anyone in need of heating or cooling service.

Description of Work
Installation of new heating, AC and fireplace at my new house.

Excellent; Andrew is very meticulous, made sure that all plumbing was correctly sized, spent some time straightening the connections instead of just using fastest fit. He has done other work at my house in the past; excellent quality and troubleshooting skills.

F and A Window Cleaning

When you call F & A Window Cleaning, Alex or Federico will be the ones answering the phone and going to your home to ensure everything is done right. With a combined experience of over 30 years servicing all of Chicagoland area, we can handle any job from window cleaning, gutter cleaning and pressure washing. We take pride in what we do! F and A Window Cleaning provides the best residential home services at the most competitive price. Our goal is to make each customer a raving fan and to earn not only their business, but that of their friends, neighbors and relatives.  …

Over 50,000 satisfied customers since 1996, we are the premier home improvement company in Chicago and the surrounding areas. Prime Time Window Cleaning provides the best residential home and commercial property services at the most competitive price. Our goal is to make each customer a raving fan and to earn not only their business, but also that of their friends, neighbors, and relatives. If you are not satisfied with our service to your home, you simply do not have to pay! Contact Prime Time Window Cleaning for your window washer Chicago services, as well as other exterior projects, such as gutter cleaning and power washing. We look forward to helping your home look its best! Book an appointment today at 800-480-1360.  …

Founded in 2002 from a small office in Naperville, IL, Mr. Duct was born with a singular mission in mind: to improve the indoor air quality for the Greater Chicagoland community. Committed to doing so with both integrity and quality, owner Keith Thompson quickly hired his first three employees and gained NADCA certification—the industry’s most thorough set of standards for HVAC inspection, cleaning and restoration services. After answering the call to improve thousands of homes and businesses’ indoor air quality, Mr. Duct experienced explosive growth: first relocating to a larger office in Lisle, IL and then establishing seven additional offices to ensure outstanding service for both Chicago and the surrounding suburbs. We’ve been privileged to serve Chicagoland for 20+ years and we firmly believe our approach is what sets us apart: Upfront and honest pricing during the quote process Superior ventilation cleaning, HVAC installation and HVAC repair from highly certified technicians White glove customer service every single step of the way Our team continues to grow to this day, with a staff of 50 specializing in residential, commercial and industrial HVAC services. Whether you need a vent, furnace or air conditioner maintenance check, cleaning, repair or installation, you can always be sure of one thing: we’ll take care of all your heating and cooling needs!  …

Bonded
Insured
All statements concerning insurance, licenses, and bonds are informational only, and are self-reported. Since insurance, licenses and bonds can expire and can be cancelled, homeowners should always check such information for themselves.To find more licensing information for your state, visit our Find Licensing Requirements page.
General Information
Free Estimates
Yes
Eco-Friendly Accreditations
Yes
Payment Options
Check
Warranties
Yes

How is A&K Heating and Cooling overall rated?

A&K Heating and Cooling is currently rated 5 overall out of 5.

What days are A&K Heating and Cooling open?

A&K Heating and Cooling is open:

What payment options does A&K Heating and Cooling provide

Are warranties offered by A&K Heating and Cooling?

What services does A&K Heating and Cooling offer?

Are there any services A&K Heating and Cooling does not offer?