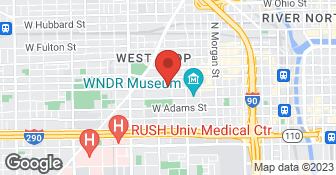 We are a full service 24 hour locksmith company designed with the customer in mind. Located in Chicago with technicians throughout the city and surrounding suburbs we pride ourselves on quality service, a quick response time and reasonable pricing....

I originally contacted this company because I was desperately trying to figure out how our condo board would get access to make Mul-T-Lock keys. The prior board had passed them out, and the new board had no idea where the key code was to copy more once a tenant lost both of her keys. After contacting at least 20 to 30 different locksmiths, plus Mul-T-Lock headquarters explaining our hands were tied (and finding out later that one locksmith who claimed they didn't copy our keys really WAS the company that did), Nonstop Locksmith was the only one that would allow me to prove that we were legit. With paperwork in hand to confirm we were legitimate board members, they were able to copy our key and also contacted the headquarters, too. (Shortly after, our incompetent and terminated property management company said they "didn't know what that box was for with the code on it" but never bothered to mail it to us or even tell us they still had it. So we finally did get the box after I had to track down that property manager plus the one before that.) Alexander was the locksmith I worked with, and he was EXTREMELY professional, helpful and funny, too. When I found out that they fixed doorbells and their rates were decent, I contacted them again. The one in my building had terrible audio, and other owners had doorbells that didn't work either. I was elated to do business with them. While I could go through all the details of them having to visit five different times due to rewiring, two condo owners who refused to stay home (or answer their door), weather damage in two bells and station replacements, what I will say is I grew extremely frustrated. But through it all, with one technician (Manuel), one manager (David) and one field manager (Rodney), we were finally able to get two of three doorbells in operable condition. The last one still has wiring issues, but that has zip zero to do with Nonstop Locksmith and everything to do with residents refusing to let them in to replace the wires. Rodney especially was patient, professional and did try to explain what the problems were. Although I did leave with more questions than answers with Manuel and David during the first few visits, physically standing there and watching Rodney work and listening to them cleared up a lot of confusion versus a summary at the end of hours of work. In all fairness, David did give me a chart to show his progress. Still, I'm a big fan of not hounding contractors while they work, but I finally did realize that wasn't going to work in this case and decided to stay put and just quietly observe. Shimon, the owner, stepped up to try to get all of our doorbell problems resolved, too, and called three times, too. While I certainly wish we could've been a one-and-done, in an older building with wiring issues that happened long before I moved in, this turned out to be a much bigger job than I expected. But I am relieved that it is (mostly) done and totally done to the best of their capabilities. Thank you!

Terrific! They showed up right on time, expert on this type of lock, and very quick.

Description of Work
They replaced some locks.

I was able to easily get a quote and set the appointment. However, at the time the technician was set to arrive I received a call saying that the tech had a personal issues and would not be able to come that day and that there was no one else that they could send. I then rescheduled for a day later in the week. During the second appointment slot I called halfway through to get an ETA and found out that they would not be able to arrive during the time they offered for the appointment due to a delay. So I then rescheduled again because I could not wait much longer for the tech. During the third day a technician finally showed up on time and did a great job changing the locks. However, I don't think that I should have to reschedule multiple times so I won't be using them again in the future.

Description of Work
I needed locks changed on my mailbox, front and back door.

Non-Stop provided a quick appointment and arrived on time. After a walk through & a description of the job, the locksmith completed the job efficiently.

It went well. The locksmith knew exactly what he was doing and it didn't take long. Also, it wasn't expensive.

Nonstop Locksmith was terrific. They answered the phone quickly, gave me a choice of appointments, let me know when they were coming, and were upfront and honest about prices and labor. Ben was great to work with -- personable, efficient, helpful. I enthusiastically recommend working with him. I could not have asked for a better experience.

Technician was nice and punctual. Quickly identified a spring out of place in my assembly that could be fixed easily after another locksmith told me I would have to replace the whole assembly for 5x the cost. Appreciate the service and honesty

He fixed the problem easily.... I'm not happy about the cost. He was there less than 20 minutes and that included a 4 or 5 minute phone call. It was a simple job the inside screws were loose nothing complicated. I was charged $104 for this....... also the morning of his appointment I called his office to check on the service call and I was quoted $35......but was charged $39.... it went up $5 in about one hour !! I've been a landlord for over 20 years and used many locksmiths but not at this cost....... I would not use them again.....

Description of Work
A door knob handle was loose.

Zack did a great job securing my locks.

Tech showed up on time, very friendly and professional, and took his time to ensure everything was done correctly. I would definitely use them again!

We are a small locksmith company that has been around for 10 years. Each year we continue to grow and expand our services. We do not use any sub contractors. We only hire the best and make sure they continue to train to enhance their skills. We offer great competitive prices throughout all the Chicago land area. We are open 24 hours a day 7 days a week and do not have any additional fees for after hours or weekends. We offer billing procedures for customer that have used our services in the past and wish to continue. We have a very motivated team that will continue to do their best and help the company meet and succeed customer’s expectations.  …

Quick Key is a family owned and operated business. Licensed, bonded and insured, Quick Key has been servicing the Chicagoland area and the surrounding suburbs since 2010. Your privacy and security is a top priority for us. All our technicians are certified and provide an extra layer of security for your home or business. Quick Key operates 24 hours a day, 7 days a week.  …

Non Stop Locksmith is currently rated 4.8 overall out of 5.

No, Non Stop Locksmith does not offer free project estimates.

No, Non Stop Locksmith does not offer eco-friendly accreditations.

No, Non Stop Locksmith does not offer a senior discount.

Are there any services Non Stop Locksmith does not offer?