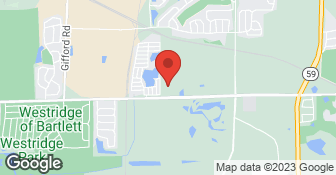 15 TIME TOP SHELF DESIGN WINNER by CLOSETS MAGAZINE/WOODWORKING NETWORK. Offering custom-designed closet and cabinetry systems, we are dedicated to providing our customers with the highest quality workmanship, superior materials, and personalized service on every project....

Marcia was our designer, and she was wonderful to work with! Professional from the start, flexible, and always receptive and responsive. The installers were great as well, always arriving within the designated window. They were also professional and friendly! We can't wait to do our pantry and nursery closet! We will definitely be using Closet OS again! Thank you for transforming our rooms and giving us great storage space!

Thank you for the great review, taking the time to complete it and of course - your business!! Marcia and the installation team enjoyed working with you and appreciated your kind hospitality. We look forward to working with you again on your pantry and nursery in the future!
5.0

Amazing! I’ve used this company over the past three years to complete installs for all of my bedroom closets, including a walk-in master closet. The quality is great and the sales team is very easy to work with. The installation team is also very respectful and courteous. I would highly recommend them.

Hi [Member Name Removed], Thanks for the nice review and sharing your completed project photo. We very much appreciate your business loyalty over the past 3 years. Bill Curran, Owner
5.0

Fantastic! They have completed four closets for my house and I love them.

[Member Name Removed], Thanks very much for the review and the ability to be of service to you. Thanks, Bill Curran, Owner
5.0

Excellent work and very timely done. I was very happy with the end results.

[Member Name Removed], Thank you so much! Please keep us in mind should you need anything in the future. Cathy August Sales and Customer Service Support
5.0

It went quite well. The work was done on time and they were very professional. The installers worked quickly and cleaned up after themselves thoroughly. The systems they designed, especially the master bedroom walk in closet and the laundry room, have been a big improvement over what was there and will allow us to fit into our condo after coming from a 4 bedroom house. The design phase was also very professional. They showed us there ideas and then discussed them with us and listened to our feedback to make changes to accomodate our particular needs and

Thank you so much for your kind words. We were glad to be part of your project. If there is ever a need, please keep us in mind!
5.0

Scheduling, design and installation all handled in a pleasant and professional manner. The end results look great, and the price reasonable. We had a shelving unit installed in our linen closet, shelving added to our basement stairwell and a slat wall on the other side for hanging things on.

Donna, who was our representative from closet OS came out to our house and worked with us to design the closet with what we wanted as well as make some recommendations to improve our design. She came back several times during construction to measure the space and make sure sure that we were getting what we wanted. When the closet was installed, the installers were very professional and neat! They took all the packaging and cardboard out to the dumpster and made sure that nothing was left behind. They asked our opinion on the installation as the closet was going in to make sure that it was as we had planned it. We were very pleased with both the quality of the materials used as well as all of the employees that worked on our project. Donna and the installers showed up on time and we would definitely recommend them to other customers as well as family and friends.

Description of Work
We were doing a master bedroom/bathroom/walk-in closet addition and we wanted to do our closet with a built in drawers and closet space for both short and long clothing.

[Member Name Removed], Thank you for your kind words. We're glad that you are satisfied with your project. If we can be of further service in the future, please keep us in mind. Cathy August Sales and Customer Support
5.0

What an amazing experience from start to finish. Donna, the designer spent countless hours creating the perfect craft room design. Dan the installer was excellent, very polite and professional. Would hire this company again in a heartbeat!

Thank you so much for the positive review. We're so glad we were able to be a part of your project.
5.0

Rich was able to come out just a couple days after I called. He was very knowledgeable and prepared a detailed estimate. After I signed the contract, they had an installation date available about 2 weeks later. That was sooner than I wanted because I still had to have the space painted, so I chose the morning slot a couple weeks after that. The installers arrived a few minutes after 8:00 and were done in less than 2 hours. They were professional and completely cleaned up the space. One piece was broken when they took it out of the box, so they couldn't install it. Later that day I got a call from Pam in the office saying they would reorder that piece and install it one week later. I had a 1:00 - 3:00 slot, but the installer called me in the morning and told me exactly when he would arrive, which was really nice! The cabinets and shelving are high quality and look beautiful!

Thank you very much for the favorable review. So glad that Rich was able to provide you with what you were requesting and that our staff met or exceeded your expectations. We appreciate your business and look forward to any other projects you may have in the future. Thank you! Cathy August COS

Closet Organizing Systems is currently rated 4.9 overall out of 5.

No, Closet Organizing Systems does not offer a senior discount.

Are there any services Closet Organizing Systems does not offer?