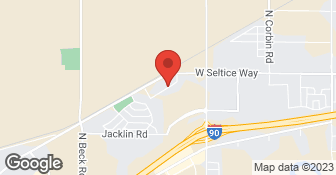 Gorton Construction is a general contractor specializing in Siding, roofing, windows and remodels. In addition to these services we also have a Mold Inspection/remediation, reo services and snow removal. We typically employ between 35-50 workers and except for rare occurences all of our work is performed in house. We are licensed and bonded for both Idaho and Washington and have an office in Post Falls, Idaho and in the Tri Cities in Washington. All bids for siding, roofing, windows and remodels are free. Snow removal, REO work and mold inspections and remediaton are bid on a case by case basis. We currently offer a 10 percent discount to Angies List customers just mention gogorton for Angie to recieve it. ...

RA3M Contracting is your owner operated professional. with over 25 years of experience, we are here to address all your home's remodeling needs and your dreams. We also provide initial and finish site prep, dirt work company. We specialize in shaping your property to fit your home, Workplace, Farm or Scenic getaway. Our work scope is foundations, Roads, Driveways and Sidewalks, Sewer lines, Septic, Pipes, Drainage and Landscaping. (We) . Trench for foundations, pools and utilities . Grade and Smooth soil for correct drainage . Demolish any pre-existing structures . Haul away dirt and debris . Create custom retaining walls . Irrigation and Sod Most importantly, we work with other local experts such as (Planning and zoning, Utility companies, Surveying, Permitting, and engineering.  …

Payed Gorton Construction to remodel a bedroom, kitchen and bathroom. Person they hired (Dustin Kloos) did not complete the job. Left us with having to hire another person to complete the job for an additional $1600. We foolishly let Kloos talk us into signing off on the contract when we made a kitchen adjustment towards the end.....that was pretty well the last we saw of Kloos. Kloos was late to work, drank on the job and then took an additional $2100+ for some additional work and kept that as well. Took to small claims....which we won. Kloos refuses to pay back what is owed. Google the name (Dustin Kloos).....several problems. Turns out Kloos had a record as well, Gortons had not checked since he was a friend of the owner.

Description of Work
Gorton Construction was hired to build a 3rd bedroom and remodel the second bathroom and kitchen. Job was not completed. Problem was with the man they hired to do the job.

Description of Work
Installed Hardie Plank siding on house. Had some left over, did my 8' X 12' pool house for no extra charge. Was not on bid.