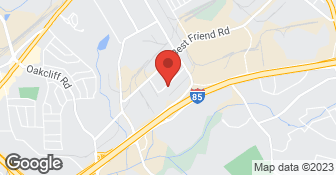 Atlanta Fence Company, Fence Works of Georgia, is a locally owned and operated Atlanta Fence Builder specializing in delivering quality fences at great prices throughout the metro Atlanta area. We understand the driving force of a successful fence company is to provide our customers with competitive costs and timely fence installation in Atlanta. Our quality service and communication ensure customer satisfaction. We stand behind our warranties and service agreements to ensure your satisfaction with your new fence....

We highly recommend Fenceworks of Georgia. They were very professional, very competent, and they were a pleasure to work with. They showed up when they were supposed to, they did what they said they would do, and the result looks great. Their written contracts are easy to understand, they don't sell you "add ons" that you don't need or want, and their crews know what they're doing.

Through Angies list I asked for a quote on Monday, today is Thursday and they didnt even call me back. I call them on tuesday and a lady told me they alredy recived my request dorm Angies list, they will call me back in the next 24 hours. Today I call back and there is only a recorder. Probably they dont need any more bussines.

Description of Work
Do a iron/aluminium fence.

I had received 3 referrals for fencing companies from individual friends who had used these companies. I decided to go with FenceWorks as their prices were better, and boy!, they did a phenomenal job! There were only 2 professionals that day who started at 930a and finished the whole job by 7p. They were courteous, listened carefully to what I wanted, and left with no sign of them being here except for my beautiful fence! All 319 feet plus 2 single gates and one double gate. They place each picket individual which I think makes the difference as the fence is level and rolls with the landscape. VERY HAPPY!!!

They called but they never came out and give estimate,never heard from them again.

Description of Work
a fence put up

This is a follow-up review. They were able to fix the issues with my fence and I'm now satisfied with the work performed. They just took a long time before they came out, but did follow through in the end. Thanks Tim.

Incredible. They was punctual, fast and careful.

It went well. The crew showed up on time and did a nice job. If I had any complaint is that it was up to me to make sure the crew knew what to do. Be sure you explain exactly what you want. There was one hiccup that we worked out because of this.

Description of Work
Repair and move some fencing. Gates built

It went very well. The crew showed up on time and finished the work ahead of schedule. Very easy and pleasant to work with. Tim and his team were great.

Description of Work
Fence in the backyard

I primarily dealt with the owner, Tim Hayes. After contacting him we scheduled a time for him to inspect the property and provide an estimate. We had to reschedule 2-3 times due to rain, but once he came out, he provided a verbal estimate on the spot and a written estimate via email within 24 hours. I received 2 other estimates. Fenceworks was the same as one of the other estimates and $400 less than the highest estimate. On the day of the job, two workers arrived promptly at the scheduled time (10am). One spoke English, the other did not. Both were extraordinarily hardworking, nice and respectful. They worked all day and completed the job around 7pm. So far the fence looks great. I read some poor reviews for Fenceworks on google and yelp (most due to poor communication and not completing the installation as requested), but I had no issues and would hire them again. I would recommend being present on the day of the install to show the workers exactly what you want.

How is FenceWorks of Georgia Inc overall rated?

FenceWorks of Georgia Inc is currently rated 4.6 overall out of 5.

What days are FenceWorks of Georgia Inc open?

FenceWorks of Georgia Inc is open:

What payment options does FenceWorks of Georgia Inc provide

No, FenceWorks of Georgia Inc does not offer eco-friendly accreditations.

Are warranties offered by FenceWorks of Georgia Inc?

What services does FenceWorks of Georgia Inc offer?