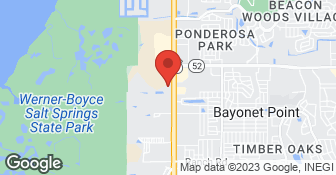 We accept Visa MasterCard Discover, Cash or Check. No Job to big or to small.

I got three estimates to have my entire pool cage rescreened. Apollo's estimate was the lowest, however I don't always go by low price because you frequently get what you pay for. My husband hired them on the spot because of their low price. Oh well, I thought, we'll see. I checked the county database to make sure that they have a current license and insurance, which they did. On Friday, 10/7, owner Jack Paulo said they would start the job "early next week". Monday came and went with no call. Tuesday, 10/11, 8am, Jack called and said they were loading up and would be at my house soon. They showed up a half hour later. There were three men- Jack, his son, and another guy. Jack only stayed for about 15 minutes and the other two men immediately went to work. They worked steady all day without bothering me a bit except for one thing. This is really the only complaint that I have. The "other guy" was a very large hairy man with an enormous belly, the biggest belly I've ever seen. He worked all day without a shirt on. His butt crack was also exposed. He smoked a lot but he was outside and I didn't find any cigarette butts in my yard so that was no big deal. This man really should have had a shirt on. I understand it's hot out (we're in Florida) but even if he had a great body I feel it's unprofessional to be shirtless. Jack jr. kept his shirt on all day and he was very friendly. The big fellow mostly worked on a scaffold doing the top screens while Jack jr. worked on the ground. They finished up around 5pm and packed up and left. The pool cage came out awesome, absolutely perfect. So in the end, seeing the big belly all day was worth it, the big man did quality work. I would definitely hire them again.

Description of Work
Our pool cage needed to be completely rescreened. It was full of holes and patches and had a green tinge from algae. It looked awful. The patio and built-in pool are on the back of the house and are completely screened in. This is common in Florida, it's also called a lanai. The cage is attached to the house roof in the back so it's not a stand-alone structure, it's almost like having another large room. It's approximately 30 x 40 feet and 10 feet tall. All the old screen was removed and rescreened, including two screen doors. The frame for the cage is in good shape and was not replaced. They also took 6 window screens from the house windows and rescreened those, too. They came back the next day and installed the new window screens.

Spot on soft wash, we clean it all. Let me provide the best services and prices to match all residential and commercial expectations! Give me a call for your free estimate just a simple phone call away to wash your troubles away. 727-481-1853 licensed & insured.. some of our cleaning services include the following. gutter cleaning, roof soft wash cleaning, algae removal, vinyl fencing, pavers, paver sealer, patio and porches, glass cleaning, driveways Provide services for any Hoa, private owners, realtors and contractors, property management. Personal properties  …

Bonded
Insured
All statements concerning insurance, licenses, and bonds are informational only, and are self-reported. Since insurance, licenses and bonds can expire and can be cancelled, homeowners should always check such information for themselves.To find more licensing information for your state, visit our Find Licensing Requirements page.
General Information
Free Estimates
Yes
Eco-Friendly Accreditations
No
Payment Options
Check, Visa, MasterCard, Discover
Senior Discount
No
Warranties
Yes

We offer all phases of Aluminum Contracting.

APOLLO ALUMINUM PRODUCTS is currently rated 5 overall out of 5.

No, APOLLO ALUMINUM PRODUCTS does not offer eco-friendly accreditations.

No, APOLLO ALUMINUM PRODUCTS does not offer a senior discount.

Are there any services APOLLO ALUMINUM PRODUCTS does not offer?

We offer all phases of Aluminum Contracting.