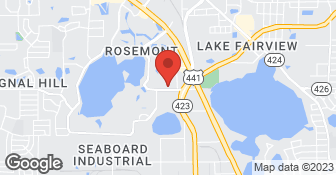 Since 1999, we are a trusted, local remodeling and repair company providing residential and commercial services. We're proud to have served over 80,000 customers and 50% of our business comes from repeat and referral customers. Our 100% satisfaction guarantee provide peace of mind to our customers. Locally owned & operated. Visit www.The-Handyman-Company.com for more information on our services....

They talk a big talk and pretend like they know what they are doing, but you're better off going with a one-man operation. These guys did an okay job with some of the things I hired them to do but left me in a huge bind one day before putting my grandmother's house on the market. Furniture was damaged, lots of small jobs left undone with no explanation or effort to finish the job. Go with literally anyone else - Nick Bohr of Bohr Home Improvement came through at the last minute to fix their work. But, honestly, you would be better off going with a Craigslist provider, doing it yourself, or asking the guy behind the 7-11 to do it for you. He's probably more honest.

Great I was very impressed, the repairman " Johnny " was here when he said he would be . He repair med the damaged areas and they look better than new. I have been a Deputy Sheriff for 33 years in the Orlando area I would refer him / them to anyone ! Work was great price was better ! I have already referred him to two elderly neighbors! Thanks again !

Prompt, courteous, and professional Work is going as planned.

Description of Work
Repaired/replaced lanai ceiling, installed fan./light kits, and installed wall sconce lights. Brought them back to remodel bathrooms. The work on the latter is in progress.

They called and was on time. Did the job in a timely fashion. Very perfessional.

Description of Work
Repaired my fence that has been a problem for a few years. Excellent work.

It took four tries. They never got it right. Company admitted they had failed to meet even their own standards, but then became upset at how long the job was taking. Yeah - us too. We would have rather you had done it correctly the first time - or God - even the third time. Employee was unprofessional and had to be told to leave multiple times - even suggesting that a tip would be appropriate for his time.

It went perfect. I have had them more than one time. Each time It has gone perfect and they did an excellent job at a fair price.

terrible service. had an appointment for the work. first guy never showed up. 2nd guy could not do the work that day. took a day off for nothing.

It went as planned and took two separate days, they did a great job!

Description of Work
Wallpaper removal and painting in two rooms. Workers were professional and friendly .

They went and picked the siding up. Robert McGrete was courteous, prompt and a great worker. There was a discrepancy with the estimate, but they did honor it. The company took the time to make some calls to the manufacturer and they decided that it didn't need the extra work to meet the standards. The estimate itself was more than fair. I'm really impressed that they went the extra mile, and can't say enough good things about them.

Description of Work
They redid the siding on my house.

Hello [Member Name Removed], Thank for the glowing review and we are pleased that you are satisfied with our work and staff! We look forward to working on other projects in the future with you, so call us when you need One Of A Kind Carpenter, Inc. Kindest regards, Management of OOAKC

Tailored Foam of Florida, Inc. has been in business since 1986 and has completed installs in over 50,000 commercial and residential projects. We specialize in spray foam insulation, a much more efficient and healthy alternative to traditional fiberglass insulation. Once spray foam is installed in your home or business, it does not lose efficiency over time like blown or batt insulation, and never has to be replaced. Tailored Foam of Florida is the largest installer of Icynene spray foam in the state. Please call us if you are interested in making an appointment with one of our foam specialists.  …

2 girls and a pressure washer

We are a 2 girl team that works hard to make sure your home, driveway, etc. is squeaky clean! We have been pressure washing since we were kids so thought why not go professional!  …

How is The Handyman Company overall rated?

The Handyman Company is currently rated 4.4 overall out of 5.

What days are The Handyman Company open?

The Handyman Company is open:

What payment options does The Handyman Company provide

Does The Handyman Company offer a senior discount?

Are warranties offered by The Handyman Company?

What services does The Handyman Company offer?

Are there any services The Handyman Company does not offer?