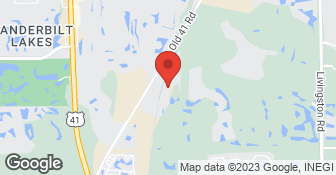 Best Home Services is the leading residential service provider of air conditioning, electrical, plumbing, and drains to Southwest Florida homeowners since 1980. A family owned and operated company, headquartered in Naples, Florida; with operating offices located in Naples, Ft. Myers, and Sarasota is centered around their core values and beliefs. The company is focused on caring for their customers and the community. Each year the Best family actively supports multiple community outreach programs throughout the Southwest Florida community. The award-winning team relentlessly works to continuously improve their service in order to make Southwest Florida homes safer, more comfortable, and more efficient-one job at a time. Giving our BEST means that we promise to… Make it easy for our customers to do business with us. Guide our customers every step of the way. Work to the BEST of our abilities, even when we make a mistake. Communicate well with everyone. Hold each other accountable to this promise. Our Core Values: Be Family – Treat everyone like a member of our family. Be Amazing- Exceed every customer’s expectations. Be Fun- We have fun while we work. Be Constantly Growing & Learning- Always strive to become better. Additional phone: 941-564-0004...

ALL ABOUT AIR CONDITIONING INC

Coming home to a hot and uncomfortable home can be frustrating. At All About Air Conditioning Inc. we are proud to be your source for quality air conditioning repairs, installation, sales, and service. We service all makes, models & brands for residential & some commercial clients. Our customers are our top priority. We are trying to make both our work environment as safe as possible, as well as, your home. We are still taking appointments, so that we can take care of your air quality needs. Our technicians will be wearing the appropriate personal protective equipment. Give us a call to have one of our technicians come out for a consultation. As always, We're the company you're comfortable with, and we're here to help you.  …

Looking for a reliable plumber in Fort Myers, Cape Coral, or the surrounding areas? Aztec Plumbing & Drains has been serving the local community for nearly three decades, offering comprehensive, top-quality plumbing services. Whether you need drain cleaning, leak detection, repiping, water heater repair, or even water filtration system installation, their trained team will get the job done right the first time. They’re equipped and ready to provide you with the quality services you need and the exceptional customer care you deserve. Aztec Plumbing & Drains understands that plumbing problems can arise at any time. With this in mind, they proudly offer 24/7 emergency services at no additional charge, ever.  …

Water damage and mold clean up  …

Unethical company. Do not use! My ceiling caved in months after the upstairs toilet was installed. It had been leaking. Company denied that was the reason. Wanted to charge another $1000 plus dollars, saying it was the pipes. I got a second opinion who verified with photos that the toilet install was completed incorrectly thus causing the leak. This company is really bad. I got the recommendation from Angie’s list and I should have researched it more.

Their service was okay, responsive and professional, the price was fair.

Description of Work
Regular maintenance of the air conditioning system

They're always good. They hired a best technician.

The man who came out did a great job, he came the same day that he called. I was amazed. He was a very experienced plumber. Worked within the time limit I had. Overall he was very professional. He came and worked very hard and left no mess at all. I am very pleased with the job. Would definitely have him do work for me again.

Description of Work
Faucet in tub/shower broke because of corrosion. Shut the main water off and fixed the piping in a 20+ year old condo.

I am updating my review because I have had Best Home Services out three times for an HVAC (upgraded to "deluxe" air handler and condenser) they installed just over a year ago (May 2019). The first time the unit needed a faulty part replaced in the air handler (the same problem with my parents' home unit installed by BHS). The technician did not put the AH back together properly, so I had to put the panels back on, locate the screws and replace one I never found. He was also supposed to do a service, but instead rushed out of here without doing so. The second time the condenser needed a faulty part replaced due to leaking refrigerant and the pipe freezing causing the fan to not run. I waited for them to show up for a scheduled appointment and sure enough, no one ever showed. I never received a phone call, either. I had to call them and find out the part never came in. Totally understandable if they would have let me known instead of leaving me waiting at home all day on a workday. This third time, the condenser is not running at all while the air handler has been blowing warm air because a contactor needs replacement. My house is currently 87° with 70% humidity. Previously, I paid $195 for the second visit for the service call and refrigerant replacement. Also, I signed up for the $249 annual service. I am still waiting for a $95 refund I was offered and a $100 coupon for future service. Another time, I had an outside water valve replaced and a short time later, that pipe began leaking where the valve was replaced. Of course, it wasn't due to their repair. I do not recommend Best Home Services for any residential service. I regret ever using them in the first place. If they complete an initial repair or install new product(s), expect to see them again and again for ongoing problems. They're the best for causing repeated home services.

They came out to my 2nd home charged me but didn't do all the work. This company is shady beware of them. I'll never recommend them to anyone ever!

They were supposed to order a water heater to replace mine. They placed the order and said it would be delivered on Tuesday. I got a text that they were coming but they never showed up. I called them, they said they wouldn't be able to come until 5pm. We scheduled for them to come the next morning. They didn't show up again. I didn't find out for 4 days that the water heater was on back order and they wouldn't have it. They still put the finance order through and I had to call to cancel it since I never received the water heater. I asked them before the finance order went through to make sure everything was cancelled, so it should never have gone through at all. They didn't offer any compensation or try to do anything, and they never reached out to me. I always had to call them to find out why they weren't showing up.

They reached out the same day, almost immediately and he was professional and indicated the first trip out was a courtesy but they wouldn't provide a price range or estimate. butler5@q.com

Avoid the company “Best Home Services” Get other quotes before calling Best Home Services. We called them for a plugged sewer line. First off they wouldn't give me an estimate of the cost until AFTER they put a camera into the line. Once they did, they came back with three unreasonable quotes with different options ranging from $3,000 to $5,000. They offered to reduce the prices by 10%, which was still unreasonable. When we challenged the price, we were told we would have to pay $350 to them because they had found the plugged area with a camera. We would have to pay $350 even if they didn't resolve the issue. The technician then said they would drop the price to $1,500, and they would waive the $350. We felt pressured to accept the $1,500 even though we thought it was high, just to avoid the $350 fee. We subsequently talked to other companies that would have charged around $500 to run a camera in, locate the issue, and water jet the plugged line. I called the Best Home Services office to see if they would reduce the cost to a more reasonable price, and the two managers I spoke with said we accepted the price at the time and that they were unwilling to make any adjustment. The technician also broke our underground sprinkler line while accessing the sewer cleanout point, which he knew happened. I subsequently had to have the sprinkler repaired Bottom line, call around before calling Best Home Services

Attempted to rip me off at every opportunity. Received calls saying I owed money for services never requested