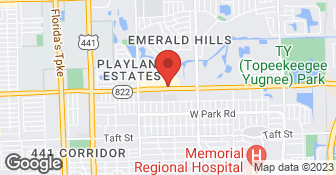 First Priority was chosen to repair damages in my kitchen due to a pipe leak behind a wall underneath the kitchen sink. The water leak ruined the ceramic tiles in the kitchen. 1st Priority claims there was mold damage in all the kitchen cabinets. The insurance company settled on a large sum of money, given to a public adjuster named Ken Hecht, who gave all of the money to First Priority, taking off 20% for himself, before the work even got started. It was in writing that 1st Priority was to receive 1/3 of the insurance money up front, 1/3 during the job and 1/3 upon completion. Mr. Hecht ignored these instructions, pocketed his 20% and gave the entire amount to 1st Priority. The insurance company allowed for complete tile replacement throughout the entire house. It was also agreed upon that all the kitchen cabinets would be replaced and the entire house would be painted. This was my parents house and while all this was going on with the leak and 1st Priority, both my parents passed away, leaving the house in my name. While I was dealing with the sudden deaths of my parents, I was also dealing with the lies, manipulations and THEFT of First Priority and the public adjuster, Ken Hecht. The tiles were never replaced, they are permanently damaged, the cabinets have holes and pitting in them, and I had to replace the sink myself at my own cost for which I was never reimbursed. When I asked 1st Priority to come back and fix these things, they refused, saying the job was complete. The value of my house has decreased by thousands of dollars because of the adjuster and First Priority, who work in tandem, ripping people off. They pocketed THOUSANDS of dollars for work they never did! I would like to sue both Ken Hecht and 1st Priority and if anyone knows a great attorney, please contact me.

If you ever want to learn how to hustle and pull the ultimate scam on helpless, elderly victims, go to work for these guys. They know every trick in the book on how to stay right on the edge of the criminal justice system without stepping over the line. They have been and may still be under investigation by the state and county criminal justice officials. They can easily be convicted of civil infractions, but most elderly victims are on a fixed income and don't have the thousands of dollars to pay lawyers to sue them in civil court and they know this. But they have no problems sueing the victims and placing liens on their homes until they get their money for work that was either not even completed or done in a horrible manner.

Description of Work
What I am about to describe happened not only to us but dozens of other elderly victims in a 55 and older condominium community in South Florida. For us it began with a leak into a condo unit from an upstairs unit but in most of the cases it begins with a small leak in the bathroom or kitchen of a condo unit. 1st Priority Restoration (now goes by the name Titan Restoration-you'll see why they changed their name in a minute) was called by the master Association insurance Committee Chairman (the inside man who prepped all of the owners ahead of time tearing each Association's annual meeting by telling them to call him whenever they had a leak). Before insurance adjuster could arrive to make assessment and take pictures, 1st Priority/Titan Restoration sent an army of non-English speaking workers into the unit with mold blowers (there was no evidence of mold in many cases). The leader of the pack (the VP of the company), pressured the president or owner to sign the contract (which was a mistake, but when people in their 60s, 70s, and 80s are pressured through coercion, intimidation, and scare tactics, they tend to sign the documents put before them). The following comprised the contract in a nutshell - once the contract is signed, all the money that the insurance company pays out must be signed over to 1st Priority within three days of receipt. That was the extent of the contract - no scope of work, no estimated time of completion, no breakdown or percentage of payments during stages of completion, etc. They then proceeded to completely completely gut our owners unit, removing all appliances, fixtures, toilets, sinks, baseboards, drywall, etc. The only thing remaining were studs. They would then leave the unit and not complete the work until the money arrived in the hands of the public adjuster, who made sure the check went into the hands of the restoration company officials instead of the owners of the policy. Then the vice president of 1st Priority would once again pressure the owner using the above tactics (and in many cases the Association as well, if both had insurance policies. In those cases, they received a two-for-one deal!) to endorse the checks directly to 1st Priority even though the work was not done or incomplete. In many cases the restoration company would take many months to come back in and do the work, if they did it all, and when they did, their workmanship was shoddy, unprofessional, and they used materials from other condos that they destroyed in some cases. In our particular case, it took them a month to get started and they never finished the work once the place was gutted. We had to hire another company to finish the job. And the sad part was, they received every penny of the insurance money minus the amount that was needed to pay for the other contractor to finish the job. The work they did - removing everything from the unit down to the wall studs and treated for mold and left the unit totally gutted. Payment for work completed - they received approximately $20,000. Unfortunately, dozens of other victims' stories are much worse than ours. The reason I know about so many other victims stories - I conducted first-hand interviews with many of the victims, took their statements, took pictures of all of the handiwork done by 1st Priority, and have copies of all of the documentation from all of the victims I interviewed. They also had a public adjuster working with them that maximized the claims for them and received not the national average of 10% but double that amount, not to mention whatever the restoration company may have paid him under the table. Long story short, they went to dozens of homes just like ours and turned a small $1000 to $5000 claim into a $20,000, $30,000, and as high as a $57,000 claim. The public adjuster received 20% of the total claim as part of his contract (again this was the part that we knew about). Once I found out that many, many owners had been victimized, I started up a victims' rights group and quickly spread the word to all of the owners in the community about the scammers. Within two months their name was mud in our community and no one would do business with them any longer. However, they continue to victimize other communities in the South Florida area under the name Titan Restoration, and they still use the 1st Priority Restoration name as well, but when you call they won't use the name. As a matter of fact, they won't use either name if you call them. They simply say, "Customer service. Can I help you." If you see these people coming, run for the hills or better yet, call your master Association and tell them this story. You can find much more detail on the activities of these despicable people by going to the following website: http://century-village-wpb.blogspot.com/search?q=1st+Priority or http://century-village-wpb.blogspot.com/. Then, if you don't see writeups about them right away, at the top of the webpage do a search for either "Titan Restoration" or "1st Priority". You can then get all of the names of the individuals involved as well as more detail regarding how they destroyed the lives of so many victims in that community.

Florida Restoration Consultants help property owners' pickup pieces and repair their properties after emergencies, restoring your property to its very best condition. Whether it's a residential or commercial building, our restoration specialists are always on hand with the right tools to deliver the best service. We understand the stress involved with handling any form of disaster, as it may consume time, energy, resources and investment to get things back to normal. To help save you from these, we offer you a team of skilled restoration specialists who come to your property with the right tools and know-how to get things done fast and effectively. Whether its a water, fire, mold or wind damage, your property is just a few clicks from the proper restoration.  …

Water Restoration Guys, with over 30 years of experience, is your all-purpose emergency and cleaning experts. We have been providing emergency services 24/7 to government, residential and commercial properties across the state of Florida. From water and fire damage to COVID-19 decontamination and much more, the Water Restoration Guys' licensed and insured technicians have the experience and skills to attend all the needs listed below, whenever you need us. Our team can gladly manage your case directly with your insurance company. We have the expertise you need in order to have the peace of mind you want and the ability to get the job done right, just let us know your emergency or situation and we'll take care of the rest. In this new era focused on health and environmental consciousness, the consumer market demand for green cleaning services helps us be at the forefront of the competition by using the highest standards for equipment, sustainable processes, and non-toxic branded cleaning products. At Water Restoration Guys, we care for the environment and work hard to maintain a responsible green philosophy.  …

First Priority Restoration is currently rated 1 overall out of 5.

No, First Priority Restoration does not offer eco-friendly accreditations.