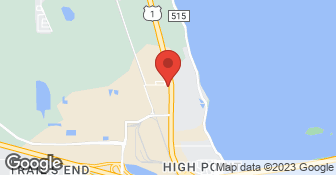 We offer the highest quality Hurricane Shutters available along with professional service all at a reasonable price. Just ask your neighbors! We take pride in our "A+" rating with the Better Business Bureau and we are a member of the Titusville Area Chamber Of Commerce. All installations are performed by our employees, NO subcontractors. We offer Galvanized, Aluminum and Clear Panel Systems, Accordion Shutter Systems, Roll-Up Shutters, Bahamas, Colonials and Hurricane Netting Systems. We also offer maintenance and service of your existing shutters. Schedule a Free In-Home Estimate- We travel to you with samples of all products and a respect of your time. We guide you through all the options and find the best solution for your needs....

I don't understand the glowing reviews, particularly about the installers. One accordion shutter in a row of three was obviously crooked but the installer insisted that the siding on the house was crooked. Apparently just in front of that one window?? I may be old but I'm not ignorant! Also, the shutters were not sized properly for the windows which left large gaps on the sides. The two Bahama shutters could only be raised a few inches even though I had specifically asked the salesman and was told that they could be raised way up. After I contacted them to express my extreme displeasure with the whole job they did come out and remount the crooked shutter, cut down the oversized shutters, and installed longer arms on the Bahama shutters. But then the disgruntled workers left sharp curly metal drill shavings all over our stone patio area as well as greasy gunk on the sides of some shutters (finally got it off with Goo-Gone). Not to mention I now have many more holes from the removal, straightening, resizing and reinstalling. The shutters should have been made to the proper size to begin with and the installers should have been more conscientious. I would not use this company again.

I was really pleased with the workmanship of Atlantic Storm . I had called them and set up appointment . Wayne Bennett came to my house and showed me the samples I showed him what I needed done. I had three main windows of the house I wanted the Nauitilus roll down shutters installed, I have a 21 x14 enclosed vinyl patio also to cover. He took all the measurements figured up the estimate and seem reasonable to me . I had three windows to be covered with the accordian shutters. One with a window ac below so had panels ordered to cover the opening. Contract stated at least four to five months for completion. They are a small and busy company so easy to understand . The owner Steve came out Feb. 24th also check on measurements and ask him how much time would be until shutters are ready. He said about two to four weeks. On March 26 got a call from Kirsten told me my accordian shutters were in which was on a Thursday told me she expected the roll downs the next day Friday. Got a call from Kirsten on Friday about 11 told me she had a crew that didn't mind working on the weekend so took the offer they came out on Sunday early went right to work at it only one slight problem one of the accordian over window and door they needed to order some parts to complete the job. Plus he had to measure the opening for the panels said would take about eight days. I believe the installers name was Gerald. Explained to me how the shutters open close They were very fast and I was rally happy with how they turned out. Kirsten had called me and told me the panels were in and the parts needed to completed the job they showed up April 23 and completed the job. It is worth the wait . They do great work would highly recommend this company . Ben R.

BE AWARE!!!! The owner Steve Smith does not abide by his word and will place a lien on your home and/or refuse to release the Notice of Commencement!!!! May 9, 2019 we put a deposit down and signed a contract that guaranteed a completion date by 6/30/19 or a full refund. They were very aware of that being the only reason we chose this company. They decided to take on more jobs and make more money when there was a hurricane coming instead of completing the job of a current customer mid-project as promised in the signed contract. It was not until October that the Owner reached out again and then asked for full payment- even with the job still not completed and shutters missing . When we asked for the refund per the contract, he said he would take all the equipment off of our freshly painted house, leaving the exterior with gaping holes and cracks from the incorrectly placed anchors and then give us our deposit back. We did not even receive all of the shutters and the ones we did do not fit correctly and they were supposed to fix before 6/30/19. He refuses to remove the Notice of Commencement on our home causing a lien.

As preparation for work to commence on your property we are required to file a Notice of Commencement (Chapter 713 of Florida Statutes) with the Clerk of Court to begin the building permit process. On May 28, 2019, your husband signed the Notice of Commencement and on June 17, 2019, the Clerk of Court recorded the document which provides notice to the county and state of Florida that improvement will be made to your property. On June 19, 2019, Brevard County issued a Building Permit for the installation of storm shutters. Hurricane hardware and tracks were installed on several installation days in June 2019, including June 19 and 24th. Hurricane panels were ordered on June 26th and you accepted delivery from our company on July 8th and 9th, 2019 (quantity 70 panels) which completed 90 percent of the installation. An additional six panels were ordered, and track was custom cut to fit one last opening in your home. Attempts were made to deliver the remaining six panels and track from mid-July through October. You notified us in mid-October that you would not pay the contracted amount because all materials were not installed and delivered by June 30, 2019. In addition, you requested that we refund your deposit amount because we did not deliver everything by June 30, 2019, yet you took receipt of all hardware and track systems in June and over seventy (70) panels on July 7, 2019. You currently have 90% of the contracted product. Refunds are available for clients that do not keep our product. Return the product (storm panels and mounting screws, does not include anchors) in new and unused condition and we will refund your money. The Notice of Commencement and Building Permit stays open with the county because you won't allow us to complete the work.
5.0

It was good, they are very professional. We would use again.

Wayne Bennett sales mgr. was great ecplained everything well and was not pushy for the sale

Thank you very much for your feedback. We'll make sure to let Wayne know how much you appreciated his guidance.
5.0

Ordering the panels took a long time, but this is just the way it is these days. The installation was smooth and they took into account all the specific needs of our home. The panels look great too. The best part is the outstanding service this company provides. I have never dealt with nicer or more professional people. I would hire them again in an instant. If I could rate them higher than an A, I surely would because they are outstanding.

Thank you so much for a glowing evaluation! We sincerely appreciate you taking the time to give us an honest review. It was a pleasure working with you and we appreciate your business. Please let us know if you ever need assistance with anything in the future.
5.0

Thank you, Mrs. [Member Name Removed]. We appreciate your business and appreciate you taking the time to give us an honest review. It was a pleasure working with you and please don't hesitate to call us if you ever need anything else.
5.0

Technicians arrived on the date and on the time they specified. Work was performed on removing shutters, removing stripped posts and replacing them. Work required @ 2 hrs. Company efficient and pro-active in communicating scheduling and coordination.

Thank you very much for your feedback. It was an absolute pleasure to work with you.
5.0

Well. Called me before showing up. Friendly and efficient.

Thank you very much for your feedback. It was an absolute pleasure to work with you.
5.0

The owners Steve and Kirsten are fantastic! Their hands on approach provides the best customer service of any company that I have dealt with. They communicate at every step of the way. I have recommended them to my daughter as well as close friends. Their products are top of the line and their pricing competitive. In the end they installed both hurricane shutters and hurricane screens, and we are extremely pleased with them, their installers and their products!

Thank you very much for your feedback and the additional referrals. Word of mouth is very valued! As a family-owned business, we work hard to provide exceptional service.

Installation, service and maintenance of all types of Hurricane Protection including Panels, Accordions, Roll-Ups, Bahamas, Colonials, CrimSafe and Netting Systems.

Atlantic Storm Protection is currently rated 4.7 overall out of 5.