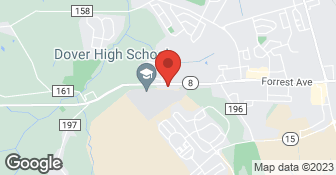 He had a crew, and he would be the first person and charges $35, the second is $25, and every person after is $20 an hour. The only thing they cleaned while I was gone picking up my mother, they had only cleaned the small kitchen, including cleaning the refrigerator and wiped off the front of the cabinets. He said he would clean the tops of the cabinets, but I can’t get up to the top myself to check. He just swept the living room floor and moved some blankets, and then called it a day. I was only gone about 2 and a half hours. For 4 people to do all that work, it should not have taken so long. On the contract I signed with him, I need carpet laid in one room and needed the room painted. I usually pay my normal painter $100 for the labor and he paints perfectly every time. Dennis charged me $270 for painting labor. He said he also had someone to lay the carpet and needed to go pick out the carpet. The one guy charged $150 and were in and out in an hour to lay the carpet. He said he had someone to paint but decided he was just going to do it himself and brought two other people with him and still charged me $270 and it took them 2 days with 3 people, 7 hours each day with all 3. My room is only 14’ by 16’ and does not have high ceilings. I ended up getting the flu and was in the other room so couldn’t watch what they were doing, but I could hear them. He finished the paint job and said he was going to leave because he didn’t want to get sick, which I was fine with because I prefer to watch what they’re doing. Everything that was on the list took longer than what it normally should. It took 2 men 3 hours to hang a mini blind in the bathroom with the brackets already installed. They reinstalled the brackets on the framing on the window where the curtains are supposed to go, so I’m going to have to end up re-installing the brackets again. I think part of what he did was the 2 days he was here painting and brought the other two guys, I was keeping track of what time they came and they typically say they would be here at 9, but wouldn’t show up until 10:30. I knew I was being cheated for time and needed him to just finish these small jobs and be done with him, but it didn’t get done without me ending up paying $2750. When he had to move the furniture, he moved everything into the den and trashed the whole room and never put anything back. He was supposed to clean the floors and windows and never did. He was going to make one area a walk-in closet with a rail, and put about a foot and a half wide rail on the wall and knocked 3 other holes in the sheet rock in our finished, recently remodeled basement and left them and didn’t tell me. He had a few receipts for materials for a few things from Home Depot and I had asked him to pick up some rock salt to prepare for the snow storm, which he did and said he laid it down and shoveled the sidewalk and charged so much extra to do that on about an inch of snow. I asked him to save the receipt and I would pay him back. When I asked him what he did with the rest of the bag when it was getting ready to snow again, he said he had thrown the little bit that was left away. Usually a bag will last me all winter, and said he had purchased just a small bag. I feel like he had just used a small portion on our sidewalks and taken the rest home for himself. He is a nice man, but I would not recommend him. I was going to need someone to help with packing my belongings to prepare for an upcoming move, and when he asked if I still needed him for that job, I would let him know, but incidentally do not intend to have him back. He did not justify the hours for each project and would leave halfway through the job and go somewhere else, and I still ended up paying for all the work by the hour. Now I know I shouldn’t pay by the hour, but should pay by the job instead.

Description of Work
He did a few different projects.

will use again in future

We used First State Power Clean LLC for about five weeks from the end of June to the end of July beginning of August. We had them come out to Oklahoma city from Dover in Maryland. They stayed on site for the five weeks and cleaned the facility as we were installing. Then we did an overall clean. They are very flexible and we had change of command one day but they stayed with us to make sure that everything was ok and ready to go until 2 o'clock in the morning. They were reasonably priced.

Description of Work
We had janitorial services from First State Power Clean LLC.

Residential and commercial exterior cleaning. We guarantee your satisfaction and we won’t leave until the job is done right. We pride ourselves on the quality work we provide, while delivering great customer service! Check out our services offered and call or click to schedule an estimate today!  …

All statements concerning insurance, licenses, and bonds are informational only, and are self-reported. Since insurance, licenses and bonds can expire and can be cancelled, homeowners should always check such information for themselves.To find more licensing information for your state, visit our Find Licensing Requirements page.
General Information
Free Estimates
No
Eco-Friendly Accreditations
No
Payment Options
Check
Senior Discount
No
Warranties
No

No, 1st State Power Clean Llc. does not offer a senior discount.

No, 1st State Power Clean Llc. does not offer warranties.