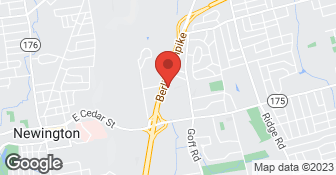 I originally ordered 16 sheets of one inch tile. The price was high ($24.99 per sheet), but they were the only ones locally who could get it for me. It took some time to arrive, but up to this point, everything was fine. Once my tiler started working, he found that he needed one more sheet. I emailed Atlas to find out how quickly I could get it in. I was told that if I paid an additional $20, I could have it shipped UPS within a couple of days. I agreed to do so. A week went by without receiving the tile. I emailed Atlas to inquire, but I received no response. Subsequently, I called and spoke with Steve. I have never had such rude customer service. He said, "Well, we emailed you three times." I said that I had not received any emails. He said, "Well, that's not important. The tile has been discontinued, and we can only get a sheet of broken tiles." I said that I would accept that, seeing as I didn't need a whole sheet anyway. I told him that I was disappointed because I had paid extra money to have it shipped quickly. He said, "I told you that we emailed you three times." I said that I had not received any emails. In fact, there were a total of twenty previous emails going back and forth, and had he just replied to any of them, his email would have gone to the correct address. Additionally, they had my phone number and could have called me. He said, "Do you want the tile or not?" I said that I still wanted it, but would hope that it would be discounted because the sheet was broken into pieces. He scoffed and said that if the place gives him a discount, he would pass it on, but he doubted it. In the end, I paid $45 for broken tiles that came nearly two weeks after I ordered them.

Description of Work
I ordered some tile to complete a bathroom project.

I have never used them for tile but for laminate flooring I would not recommend them.

Description of Work
They removed an old tile floor from the kitchen and entry way and put a laminate floor down. The floor they brought was warped and they had to reorder it and then a week later they installed that. It was poor craftsmanship. Where the laminate flooring met the boards on the floor they put a trim up and they did not do a very good job.

THEY CUT THE CARPET, SO WE WOULD HAVE THE MOST USE OF IT. THEY CAME OUT TO THE HOUSE AS SCHEDULED WITH ALL THE RIGHT SUPPLIES TO GET STARTED. THEY ALSO DID A GREAT JOB OF USING ALL OF THE CARPET. THEY WERE HONEST AND VERY KIND.

Description of Work
I HAD CARPET INSTALLED IN FOUR ROOMS OF OUR HOME.

THEY DID A VERY NICE JOB INSTALLING THE LINOLEUM. THE PRICE MIGHT HAVE BEEN A LITTLE BIT HIGH, BUT THEY WERE PROMPT AND FRIENDLY. THEY CLEANED UP ANY MESS THERE MIGHT HAVE BEEN.

Description of Work
THEY INSTALLED NEW LINOLEUM IN OUR KITCHEN.

THEY HAVE AN OUTSTANDING COMPANY, BECAUSE THEY TOOK THEIR TIME TO GET THINGS IN RIGHT. THEY ALSO HAD A GREAT ATTITUDE WITH WORKING AND WERE VERY FRIENDLY.

Description of Work
I HAD THEM PUT IN A HARDWOOD FLOOR IN THE FAMILY ROOM, AND HAD TILE PUT IN THE KITCHEN.

Frittaz LLC is a small growing business specializing in Vinyl and laminate flooring installation. As an owner operated business, I pride myself in giving the best customer service possible. My work will speak for itself! I look forward to working with you so give me a call or click for an estimate today!  …

DEAR CUSTOMER, Lucys hardwood floors is a family woman operated business. since 2006 we provide flooring services in CT,MA and NY. Thank you for your interest in Lucy's Hardwood Floor, LLC. We offer a wide variety of services for residential and commercial needs. With over 16 years in the business, Lucy's Hardwood Floor, LLC, has refinished, and/or installed thousands of hardwood floors. We are one of Connecticut's largest professional hardwood floor specialists . We pride ourselves on professional floor refinishing. We have a powerful vacuuming system to reduce dust. We check our equipment to make certain that the machine is balanced and in good operating condition. With our time you will find professionals to install, sanding, refinish or just re coating your floor. We install vinyl and laminate floors. Also, we offer free estimates. 203-400-7375 Lucy's Hardwood Floor, LLC We hope to see you soon. Lucy Freitas  …

We have the experience and dedication to bring your dreams to reality! Specializing in hardwood flooring services, we guarantee your satisfaction and we won’t leave until the job is done right. We pride ourselves on the quality work we provide, while delivering great customer service! Check out our services offered and call or click to schedule a free estimate today!  …

Bonded
Insured
All statements concerning insurance, licenses, and bonds are informational only, and are self-reported. Since insurance, licenses and bonds can expire and can be cancelled, homeowners should always check such information for themselves.To find more licensing information for your state, visit our Find Licensing Requirements page.
All skilled traders and home improvement contractors operating in the State of Connecticut are required to be licensed or registered by the State Department of Consumer Protection. License or registration identification is required to be on all advertising, business cards, signage, and contracts. You can check to see if a contractor or tradesperson is licensed or registered by going to:https://www.elicense.ct.gov/
General Information
Free Estimates
Yes
Eco-Friendly Accreditations
No
Payment Options
Check, Visa, MasterCard, American Express, Discover
Senior Discount
NO
Warranties
Ask for details

No, ATLAS TILE CARPET & WOOD FLOORING does not offer a senior discount.

No, ATLAS TILE CARPET & WOOD FLOORING does not offer warranties.