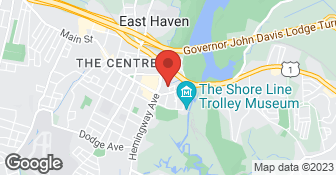 With over 15 years experience working together, our team guarantee is that no job is complete until our customers are 100% satisfied. Give us the opportunity to provide you a FREE no obligation estimate to suit your specific requirements. Additional DBA - AB Seamless Gutters.

Came within 20 minutes after we call to view the problem. The repair was done nicely and very profession. We will definitely have them come back to do other gutter/roof related jobs.

They did an outstanding job and even fixed some problems we had with the gutters. They were on time, efficient and I would definitely recommend them.

Description of Work
All the gutters in our condo complex.

He completed all gutter work in 2 days, plus took one more day to finish painting and repairing rotten wood.

Description of Work
Joe Scala is very helpful and his crew was excellent. He performed all the work efficiently and economically.

Description of Work
Cleaned my gutters. They showed up on time, are friendly and cleaned up afterwards

My husband did not want him to come back so he called another person to fix the first one's error.

Description of Work
He was supposed to fix the gutter as it was leaking into the basement.

I called Joe on a Wednesday afternoon for an estimate and he said he was in the area and could come over within a half hour. He did and gave me an estimate right on-the-spot. Since it was a 3 hour job he said that he could do it the next day when they finish their other job in the area. They came at 3 and were done by 6. The work was excellent. I feel very lucky that they were able to come over so quickly because I know his phone is ringing off the hook.

Very weel, they showed up on time and cleaned everything out

Boards replaced on existing deck were not staggered resulting in a "seam" like appearance down the side of the deck. Did NOT use pressure treated lumber on this exterior deck and roof work, so mildew already setting in and will rot in no time. Rolled roofing was not adhered property (sticky backing not removed and "stuck" on), nails sticking up and out of the material, large gap allowing water to run down side of house which is likely what is causing the new (NON PRESSURE TREATED) wood on the deck to mildew so quickly. Cement board put up for shower surround was not at the proper angle with the tub which resulted in additional work/cost having to be done in order for the tile to be adhered properly - avoiding leaks. In addition, sheetrock mud (durock) was washed down bathtub drain resulting in clogging that had to be repaired by a plumber. Typically came to the site between 9:30-10A daily. Smoked inside of the property, left cans, food wrappers, etc around job site nightly. Found out while this was happening that owner's license and insurance both laped a few months prior to the work actually beginning. They may have been renewed by now, suggest you check before hiring. They are fine for just gutters which I had them do on a previous home, but they cannot "do it all", as the owner claimed.

Description of Work
replaced rotted boards on a deck, repaired hole in roof and tacked on ice/water (rolled roofing), built walk in closet), put up cement board in shower, replaced door on side of garage.

They did a good job. I felt that the price was fair for the service.

Description of Work
They cleaned the gutters. They did some repairs as well.

Very well - was prompt to come and give estimate. Matched roof shingles exaclty, remove 4 rows of shingle below a dormer window, put flashing down and attached new shingles. Put flashing under other shingles in 2 different locations that had nail holes. Cleaned up.

Description of Work
Repaired roof leak. (Roof had been damaged by another contractor). Also cleaned gutters.

Thank you for viewing our business profile. We are certified by the CHIMNEY SAFETY INSTITUTE of AMERICA (csia.org) and are A rated by the BETTER BUSSINESS BUREAU. Owner, Charles McCarthy, is the longest CSIA CERTIFIED MASTER TECHNICIAN, and LICENSED MASTER SWEEP, by the NATIONAL CHIMNEY SWEEP GUILD, and NATIONAL FIRE PROTECTION ASSOCIATION. Certified Chimney is a full-service chimney cleaning company. No job is too big or too small. We offer 24/7 Emergency Service. We are experts in everything and anything related to your chimney. Our family-owned business has been in the chimney industry for over 25 years. We pride ourselves on offering premium customer service to our valued customers along with professional advice. We stay current on safety codes and regulations, as well as innovative tools and products for chimneys and fireplaces, so we can recommend the very best for our customers. We service residential as well as commercial. We offer free written estimates on any kind of repair. Currently we service Nassau County, Suffolk County and the 5 Boroughs of NYC, Westchester, and Fairfield County.  …

Bonded
Insured
All statements concerning insurance, licenses, and bonds are informational only, and are self-reported. Since insurance, licenses and bonds can expire and can be cancelled, homeowners should always check such information for themselves.To find more licensing information for your state, visit our Find Licensing Requirements page.
All skilled traders and home improvement contractors operating in the State of Connecticut are required to be licensed or registered by the State Department of Consumer Protection. License or registration identification is required to be on all advertising, business cards, signage, and contracts. You can check to see if a contractor or tradesperson is licensed or registered by going to:https://www.elicense.ct.gov/
General Information
Free Estimates
Yes
Eco-Friendly Accreditations
No
Payment Options
Check
Warranties
Yes

AB Gutters LLC is currently rated 4.4 overall out of 5.

No, AB Gutters LLC does not offer eco-friendly accreditations.