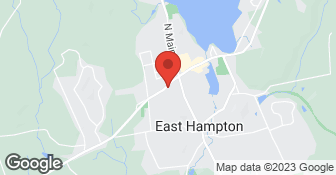 H2O Equipment Company Inc. is a family owned and operated water treatment company in Connecticut. Water treatment and well services have been our specialty since 1967 ....

On a this last Sunday morning we woke up to a dead well pump and no water. We have a small horse farm and need lots of water. So, getting their name from Angie's list, at 9 am i called H2O and told them of our problem. They said a technician would call me right back. Not more than 10 minuets later i got a call from "Ted". He told me he was calling from his KAYAK!! on the Connecticut river but said he would be here in an hour!! He arrived with the H20 truck, pumps pipes wire etc. He left the Kayak home. By 2 pm, we had a new well pump installed complete with new wiring and well cap, and best of all....water. They deserve a better than an A rating....i give them an A+++ Dave

He called me and was very professional and explained that only Kenetico dealers are allowed to work on the system. We spoke about a replacement water system if the servicing from the dealer was not financially economical. I was very pleased with his response and guidance on what to do. I would certainly recommend him and would hire him in the future. CJ

Excellent, both times! I trust Keith Ritchie, their water treatment consultant, explicitly. He'll give you honest options and price points. The technicians are excellent and trustworthy and work efficiently. I highly recommend them!

Description of Work
H2O has performed work for me twice. In my old house they replaced a well pump and installed a whole house filter and in my current house we just had a water softening system replaced and whole filter installed.

H2O is always timely, professional and leaves work area cleaner than they find it. They clearly explain options of equip to install; pricing and scheduling. They discuss financing if needed. They assist homeowner make an informed decision for their situation. After install they explain system clearly. They will also return immediately if there is a problem or question.

Description of Work
New pump and filter and ion exchanger

kitten note from the H2O was very responsive the night I called because the water softening tank was damaged by the water pressure coming from well pump not regulating the water pressure. They priced options and helped me decide the best system for my home and replaced the water softening systems and well pump sensor on a timely basis and checked in with me a week later. Unfortunately the water pressure was continuing to be a problem and they determined that the well pump was failing. They gave me options and helped me decide the best for my home. They expedited the parts so that the work could be done as quickly as possible.Once the work was done they checked in a week later to make sure all was working correctly and recently I received a handwritten note thanking me for my business.H2O has been my water services company since 1992 and will continue to be as long as I live in the area.

Thank you [Member Name Removed] for the lovely review. We are glad we were able to help you. H2o Equipment Team
5.0

We chose the company who had provided service in the past, and did not seek competing bids. They were very responsive, changing around appointments to come diagnose our problem when we called because we couldn't deal with the low pressure any longer, and offering some flexible options for payment. The price seemed fair enough, and they managed to get the materials and be read to install 3 days after we made our decision. The installer worked for them full time, and was professional, courteous, and respectful of our property and pets. He worked non-stop, efficiently, and with deliberation - meaning he didn't pause to figure out what to do next. IMO, this was a man who knew his work inside out. And he also took time to explain how to maintain the system, show me the blocked up pipes, answered all my questions, etc. I'd recommend you ask for him (Jim) if you use this company.

Description of Work
We had our water softening system replaced. The old system had expired and our pipes were full of corrosion and sediment. Water pressure was too low to flush a toilet while anyone was in the shower.

Description of Work
Performed yearly check-up on water system, made appropriate changes to meet current needs, answered all my questions and instructed me in the use of the system.

They came in August, and they gave me a quote. I could not do it right away, and so I called them in September and made an appointment for October. The deal was that we had to dig, and if I dug it too early, I could not use water in the house. I dug the well a day before they were supposed to come, and I found the leak. Then it rained the same night, and so there was a puddle. I called them and told them that it would be difficult to work, so they should postpone. I thought they would delay it for a day or 2, but she said that they could not do it until Friday. I told her it was fine, and we would live somehow. We did not have water and my wife was upset because we have a kid. She asked if I could call and if they could come earlier. I called them to ask if they could come earlier, and she said that they had not confirmed about Friday, and they could only come on Monday the following week. I said that was fine, and I said that I would call her back. I called her back, and she said that they could not come until Thursday the following week. I asked her why she had said Monday, and she said she hadn't said anything about Monday. I then found out that they did not have enough people. I then called another company that said they could come the next day, and I was happy because I didn't have to stay without water for 10 days. I made an appointment with them, and I also dug it up, but it got filled with water, so I informed them about it. They left me with the confidence that they were coming on Friday, and then they backed out of it, then they said Monday, which they backed out of as well. It was very misleading for me. It went to as far as me asking them to give me the appointment in writing.

Description of Work
I got a quote from H2O.

The company called ahead to confirm the appointment and the technician arrived on time. The technician was very knowledgeable and answered all my questions.

They were very clear on what the problem was and what to expect from the treatment. They stated that if the problem returns after the chlorine treatment, then a treatment system would be in order. The problem has returned and we have yet to have the system installed, but when we do we will most likely use H2O Equipment.

Description of Work
Treated our well with chlorine for iron content.

They are a local company. He came out first thing the following morning after I called him. Everything was fine with him. I really didn't have a choice and didn't compare pricing but I thought their price was probably average.

Description of Work
I used H2O Equipment Company to replace a well pump.

My well pump just gave out so I called them out to give me an estimate and I ended up using them to pull out the old pump and put in a new one. They did that, they were prompt, the guy was here right away because I obviously have no more pressure because I had no well pump. They tested my water and I've been thinking of getting a water treatment system. A week later, the guy came out and explained various options to me so I ended up a purchasing a water treatment system. They came and installed it. They gave me a time window of when they will be here. They came on time, they were efficient, clean, got in and got out and they told me how the system worked and then subsequently I got a caller on email about their service, so they were interested on the customer service that I had. I consider them very trustworthy, I left them access to my basement while I was away and they just delivered results. They were in and out, left me a bill, it was very accommodating. They're very professional and I con't know if their price is any higher or lower than anyone else but their services are pretty comprehensive. They don't try to up sell you.

Description of Work
I used H2O Equipment Company Inc. for wells and pumps and install a lot of treatments with them for the last couple of months.

.We used them in the last couple of years. I was satisfied with all their services. I would give them top marks. We were very happy with them. We chose them because of price and they delivered. We will continue to use their services.

Description of Work
I went to H2O Equipment Company Inc for water softener.

My overall experience was very positive and I would definitely use them again.

Description of Work
I would highly recommend H20 equipment company for your well service issues. Keith was very knowledgeable on the solutions to my problem, and Tyler did a quick professional installation.

They were great- prompt, courteous and neat.

Description of Work
They put in equipment to take care of the PH in the water.

We joined Angie's List in August of 2007 and have earned their Super Service Award every year since 2009 when they started that program. HARP Home Services, LLC is here to take care of all your heating and air conditioning needs. Whether you are looking for a free quote on a new central air conditioning system or are ready to install radiant floor heating or a new boiler for those chilly winter months, we're just a phone call (or e-mail) away. Residential & Commercial.  …

Insured
All statements concerning insurance, licenses, and bonds are informational only, and are self-reported. Since insurance, licenses and bonds can expire and can be cancelled, homeowners should always check such information for themselves.To find more licensing information for your state, visit our Find Licensing Requirements page.
All skilled traders and home improvement contractors operating in the State of Connecticut are required to be licensed or registered by the State Department of Consumer Protection. License or registration identification is required to be on all advertising, business cards, signage, and contracts. You can check to see if a contractor or tradesperson is licensed or registered by going to:https://www.elicense.ct.gov/
General Information
Free Estimates
Yes
Eco-Friendly Accreditations
No
Payment Options
Discover, MasterCard, Visa, Check, Financing Available
Senior Discount
No
Emergency Service
Yes
Warranties
Yes

H2O Equipment Company Inc is currently rated 5 overall out of 5.

No, H2O Equipment Company Inc does not offer eco-friendly accreditations.

No, H2O Equipment Company Inc does not offer a senior discount.