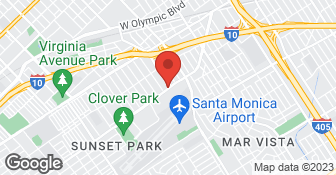 AMEN Pest Control provides environmentally-friendly pest control solutions for commercial properties and residential owners in the Los Angeles area. Seasoned professionals with 20 years of experience provide expert service and sales for executive, commercial, and residential accounts (property managers, real estate brokers and agents, homeowners, sellers in escrow, etc.) to protect your family and the environment in all things related to pest control, including recovering from infestation....

After going back and forth with the admin to find a time that wasn't a 2 hour window for an interview to see if Amen Extermination was the right company for us we were given a specific time. 15 min. after their scheduled arrival I had to call them to see where they were and if I could help them find parking so we could have our appointment. They then called me back to say the exterminator would be up to an hour late. I told them I had a short window of time and would have to leave and could they confirm the time. They then said that, actually the exterminator would be an hour and a half late. Don't waste your time with these guys. They do not respect peoples time.

it went very well, not only exterminated the roaches but provided lots of education on process and products used.

Description of Work
extermintation of roaches

I just want to take time out and let Amen Pest Control (Especially Eugene) what an excellent job and customer service they have provided us. When our property management firm called and let Eugene know that we had a pest problem, he came out right away. It was late in the day, and his work truck was in the shop. But Eugene borrowed a car just to make it out to our house the same day. Eugene was very customer friendly and explained the 3-week process it takes to control the pest and rodents. After the three-week procedure is up, then they would seal up the holes in the wall. Eugene made himself available by phone call and or text messages throughout the whole time. Even after work hours, I texted him, and he sent a video of how to dispose of the rat properly. I highly recommend Eugene and Amen Pest Control to help with your Pest and Rodent Problems. We found him very knowledgeable, trustworthy, super friendly, and reliable to get the job done.

I asked them to do a monthly service. And I always told them to call me before they come. I happen to be home one day and I saw truck driver and he sprayed just in the front. I advised them about it and they jsut asked if I would like to discontinue the service.

They inspect the property and determined how the mice was getting in. They set up traps and removed the mice. They set a time to monitor the property to make sure that I had no other problems. I also hired them for monthly spraying for other pest and wasps.

Description of Work
I hired Amen Pest control assist with a problem with mice.

Purchased a Angie's list special for bimonthly service. My neighbor used this company and recommended them. I waited 2 weeks for them to call me for the 1st service and when I did not get a call, I called them and they responded promptly with an apology. Sprayed exterior including garage, removed spider webs, bee hives and surveyed interior area for insects on initial visit.

Friendly, on time, thorough. Company has a mom and pop feel. Would consider using them again in the future.

Prompt, communicative, efficient and took care of it!

Description of Work
Took care of my cockroach problem and answered all my questions. I was horrified that I had them and they made it as Easy as possible.

As is usually the case for me, I had very little time to address some termite damage I discovered near the back door of my rental home before my new renters moved in the following week. I found AMEN on Angie's List on Saturday morning and gave them a call, intending to leave a message, but they answered! I told them my situation and short time frame, intending to set up an appointment on Monday, but to my surprise, George and Omar said they could meet me at the house within the hour. I showed them the damage I had found on the house and they identified the cause: drywood termites. They also examined around the perimeter of the house, through the garage, and inside, identifying any additional areas of concern due to subterranean termites. Through it all, they also gave me tips on red flags that could cause future issues with subterranean termite damage, such as the soil being too high up touching the foundation/stucco of the house, and inadequate drainage in the flower bed adjoining the front of our home. They were very clear in explaining why they recommended certain courses of action rather than others to treat my problems (eg my home had been tented 7 years ago so they recommended a spot treatment for the drywood termites rather than full fumigation). I learned a lot about my home, and about pest control even in that initial inspection, and felt very impressed with AMEN's knowledge and credentials in this area. George was very accommodating of my time crunch, and gave me a verbal quote for the job. Later that afternoon, he sent me the written quote and contract. I thought the quote was fair and accepted it so that he and Omar could perform the work, signing and returning the contract to him that night via email. Just have to add, I am a stickler for details, so George's attention to detail and administrative skills impressed me greatly, as this is not an area where many contractors excel. He was also very quick to respond, both in that initial call and via email. On the day of the treatment, George and Omar arrived within the scheduled window and went to work on the labor-heavy tasks we had agreed upon. Once completed a few hours later, they walked me through all the work they had done. I was very happy with the thoroughness of the work, and the cleanliness of the overall work space after they had completed everything. I would not hesitate to call AMEN again for this work, and fully intend to do just that for my own home, and to call them back out for preventative inspections at least once a year. On top of all of the above, I thought both George and Omar were just so pleasant to be able to work with. They were both so friendly, and funny, and definitely seem to make a great team that enjoys what they do. I intend to continue to support this small business.

Thanks for the review. AMEN Pest Control looks forward to continue doing business with you!
5.0

we ended up not having any issues, Very honest and upfront. he didnt try to rip me off like the last company. will call for any pest needs.