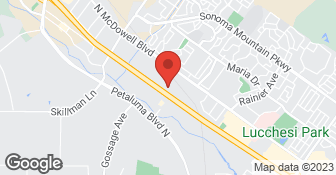 With over 22 years of residential and commercial flooring experience and thousands of satisfied customers, we're proud to call ourselves your neighborhood experts. Providing full-service sales representatives, extensive product selection and expert installation, it's no wonder Tri-County Floors continues to guarantee the best flooring and Construction service possible in Santa Rosa, Petaluma, Novato, Sonoma County and the Greater North Bay. At TC Design Center our professionals are here to guide you through the entire process of home building. From design, to build to completion, we provide exceptional service and dedication. The decades of experiences of our team of design, construction and management professionals have decades of experience and look forward to helping you make your residential or commercial building dreams a reality

If I could, I would for then a negative rating. Hired them thru union city Lowes . Susan and her manager (Ethan I believe) are dishonest and the installers broke the toilet plumbing which will cost me at least $1000 to get it fixed. While pulling out the toilet, installer broke the flange. He didnt tell me nor did he stop. After the tiles were installed, when he tried to install the toilet back, he couldnt. Thats when he mentioned that its broken. To fix I will have to get the tiles removed, cut open the floor, replace the flange and buy new tiles to replace the ones I pulled out. When I called the BJM office on Friday, they agreed that their installer should have told me and that they will get it fixed. On Monday (2 days without a functioning toilet in 1bd condo) when Lowes call them, Susan flat out lies and says it was already broken. Well if it was broken, how come it didnt leak? I am sure people downstairs would have noticed the leak running into their bathroom. Save yourself the frustration and find someone who are honest, good and reliable.

**OVER 15 YEARS OF EXPERIENCE IN THE INDUSTRY** We have the experience our clients depend on to make every dollar count. We are a positive-safety company that takes extra care and effort to ensure that every job is done to the standards of the industry, the State of California, and most importantly our standards. We don’t leave a job half-done or only “looking” finished. We will fully complete the job you hired us for, asking the questions needed to make sure that we have all the details to ensure the work is done to your satisfaction. Contact us for your FREE ESTIMATE!!  …

In Business Since 2010 Specialize in asphalt installation,repair&sealcoating Elite Paving Company is committed to excellence in every aspect of our business. We uphold a standard of integrity bound by fairness, honesty, and personal responsibility. Our distinction is the quality of service we bring to our customers. Accurate knowledge of our trade combined with ability is what makes us true professionals. Above all, we are watchful of our customers' interests, and make their concerns the basis of our business. How We Got Started I chose to work in this industry because My family been in the business for over 65 years . We describe our business as Family owned and operated  …

How is BJM Construction overall rated?

BJM Construction is currently rated 1 overall out of 5.

What days are BJM Construction open?

Are warranties offered by BJM Construction?

No, BJM Construction does not offer warranties.

What services does BJM Construction offer?