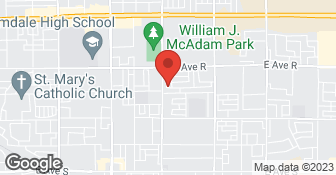 We are a licensed painting company doing interior and exterior painting work since 1999. If you are a new buyer or investor, we are the right guys to call. We have tons of references. We also do drywall, retexturing, stain/varnish, popcorn and paper removal, base board installation, power washing, and dry rot wood repair....

Lucas and Fernando did the work and they did a great job and were very friendly. We were grateful as we needed the job done quickly. They painted a living room and a bathroom.

Description of Work
Orlando also gave us an estimate over the phone. The crew came the same day at 11:00am and were finished by 6:00pm. They did a very professional job of painting for a reasonable cost. The price was half the price of other estimates we received.

Danny showed up on time, was very nice and completed the job in one day. Everything was kept very clean and I was pleased with the job

Description of Work
MC painting crew patched and primed the ceilings after a popcorn ceiling removal contractor had left gouges in the ceiling during the process of scraping off the ceiling. They also painted the entire house - ceilings, walls, and trim.

Orlando also gave us a free estimate over the phone. They worked fast, the price was low, and they did a great job. We are very happy with their work and would definitely hire them again.

Description of Work
We hired them to paint the inside of our house (1800sq ft), walls only. We used 4 colors and bought Dunn Edwards paint.

The owner Orlando provided us with a free estimate over the phone. His bid was lower than other quotes we received. We decided to hire them to paint 2 interior bedrooms. They arrived on a Saturday morning around 8:00 and finished at 1:00. The work was excellent. We would recommend them and definitely hire them again.

I can't say enough good things about them! We have used them in the past and I will always call them for all my painting needs in the future. They do great work and they are very reasonably priced. They always show up on time and are very polite.

Description of Work
We had the kitchen painted and they replaced the baseboards. They also painted our front door.

I can not say enough positive things about Orlando and his crew. Professional, quality work and quick. Orlando did my entire job in one day compared to the other bids I received which told me 2-3days and gave me estimates for over 2k! He is a problem solver and a hard worker. Use MC Painting with confidence. Orlando is a great guy. Look forward to working with him again soon.

They did a good job, they got it done quickly, and the price was good. I?ve recently called them to get a quote for my fence.

Description of Work
MC Painting painted a bathroom for me.

They were very professional and did excellent work. They always showed up on time. Thier prices were great too.

Description of Work
They redid and painted our cabints, the painted whole house, and removed the wallpaper before painting.

Orlando and his crew did a terrific job. They were on time, tidy, and reasonable. I would recommend them for any painting, removal of 'popcorn' ceilings, or drywall work.

Description of Work
I had my the whole of my house repainted inside with some drywall repair, and removal of the 'popcorn' ceiling by mcpainting (contractor's license #765698).

Orlando under bid other guys by almost $2000. However, as the project proceeded and I wanted more things, the price went up, which was understandable. A good example was that he didn't realize that the ceiling was plaster underneath -- he thought it was drywall -- hence a $500 increase in price. He still was cheaper by $1000. The place looked much better afterward, but one bathroom's wallpaper seemed too much for him to handle, and after finishing there were still corners and and areas that needed improvements, and looked simply unfinished. We never expected all the walls to be smooth, but there were several areas that clearly needed to be sanded down, and some lines that could have been smoother. I think we got a fair price for the work that was completed, but if you want a sharper job, consider paying a little more for someone else.

Description of Work
Orlando and his crew skim coated the plaster ceiling after the acoustic was removed (they did not remove the acoustic -- we had someone else do that) and then orange peel it. They did this everywhere except the bathrooms (which never had acoustic). They also removed wallpaper in the kitchen, dining room, one bedroom, and one both bathrooms. They painted the entire interior, making the ceiling white, the walls whatever color we wanted, and the baseboard and other molding white.

M C Painting does excellent, professional work at an affordable price. Orlando Murcia Castillo and his team went above and beyond what I was expecting. I consider myself a "tough customer" and I was 100% satisfied with the job they performed. If you have any painting needs, do not hesitate to give Orlando a call.

The experience was pleasant and comfortable. We had had several estimates and Mc was the best and the most detailed. We are extremely satisfied with all rooms/home painted. We have many compliments on the work done to our new home. We have also recommended their services to many other friends. I am confident with MC and will ask them to return for future painting on the int/ext.

I got Orlando's list and they did not steer me wrong! He and his crew were professional in every way, giving me a beautiful home for a good price. The crew didn't waste any time getting the job done, with one man priming, one painting and one air painting the acoustic ceiling. They completed the painting in a (short) day and cleaned up when the left. I would recommend Orlando to anyone and the cherry on top is that Orlando is as nice as his work is excellent.

Description of Work
Orlando painted my small apartment: kitchnette, (small) bathroom, livingroom and ACOUSTIC ceiling. In the bathroon he painted the walls and ceiling, which required real expertise since small bathrooms are harder to paint than larger ones and the painters barely fit in it (!) The rest of my apartment looked great, but the ACOUSTIC CEILING was a tour de force. Orlando brought in a special crew to "sray (air?) paint" this bumpy surface held together by "difficult to paint" metal beams. He pulled it off beautifully. I had no idea such a thing could be done and that I was going to have to live with that scuzzy ceiling forever, looking even scuzzier with the newly painted walls. It looked brand new when he was finished.

I called them and they came out with in a couple hours. The next morning they provided me with an estimate. Which I thought was great. They followed up with another call and email. Orlando, and his crew were always on time, professional, and clean. They finished the job at the estimated time and cleaned up afterwards very well. I would recommend their work to anyone. I was very pleased.

Description of Work
Painted the entire inside of our house.

PROMPT- WITH ESTIMATE AND DOING JOB. GOOD WORK, BASE COAT AND SECOND COAT. GOOD FOLLOW-UP. NEATLY DONE. CHECKED BACK TO SEE ABOUT OUR SATISFACTION WITH THE JOB. TOOK ONLY A WEEK TO DO.

A-1 plastering is both residential and commercial. We are licensed, bonded, registered with PW and insured with 30+ years Acrylic Stucco Modeling Foam Quality Work Guaranteed Call us today for a free estimate. A-1 Plastering LLC I look forward to hearing from you!  …

Sinai Painting Pros is a small painting business that started 7 years ago. we specialize in interior and exterior painting. We do both commercial and residential project. Our work ethic and customer satisfaction makes us stand out from our competitors. We have been in business for 7 years and we have some best staff out in the field. Our work speaks for itself and if the client isn't happy we are willing to do whatever it takes for customer satisfaction.  …

Specializing in stucco! We always guarantee your satisfaction and won’t leave until the job is done right. We take pride in ourselves and on the quality work we provide, while always delivering great customer service! Check out our services offered, then call --or-- click to schedule a free estimate today!  …

Bonded
Insured
All statements concerning insurance, licenses, and bonds are informational only, and are self-reported. Since insurance, licenses and bonds can expire and can be cancelled, homeowners should always check such information for themselves.To find more licensing information for your state, visit our Find Licensing Requirements page.
General Information
Free Estimates
Yes
Eco-Friendly Accreditations
No
Payment Options
Check
Senior Discount
ASK FOR DETAILS
Warranties
Ask for details

M C Painting is currently rated 4.9 overall out of 5.

No, M C Painting does not offer eco-friendly accreditations.

No, M C Painting does not offer a senior discount.

No, M C Painting does not offer warranties.