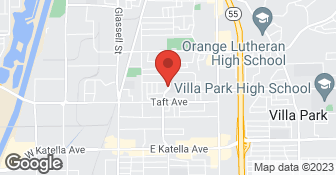 Founded in 1980 Tony's BC Tree Services is a professional, dependable and hones tree service company with a growing number of clients. we have been serving the O.C and L.A. areas for many years. Our staff members are well trained tree trimmers and experts in all types of tree care and removal service. Whether you need basic tree trimming getting new trees planted or need help cleaning up your property after wind damage, trust the professionals at Tony's BC Tree Service to get the job done right. for all your tree maintenance. Additional DBA - Tony's BC Tree Service. Additional phone number - (714) 315-1411....

Description of Work
Trimmed a hedge and thinned out a tree. They showed up 1 hour earlier then their scheduled time without any notice by phone call from office or the crew chief. Very unprofessional as I had just stepped out of the shower when they knocked on my door. Called the office to complain but don't know it any action by the company will change. Communication is very important. The crew chief didn't seem to care. Didn't apologize. Said nothing. They did a great job though otherwise.

Description of Work
Used them Several times previously. They didn't do much this time. Trimmed a couple of trees. Every time that I use them, they are prompt, work well, meet my needs and do an excellent clean up.

Fine. My presence was not required. See above for details. ALL WENT GOOD

Description of Work
They came on time as scheduled. They were very polite, quick, knowledgeable and gave me what I asked for and what I paid for.

He came on time for estimate, I called back and booked him. His crew came, they saw, they did, and they went. Very professional, even cleaned the roof and gutters. My yard was cleaner when he left than it was before his crew did the work. They were very nice people,and answered all my questions. I never have had such a nice time with a contractor. I was a SSG on the Army 13 years, and I'm picky and meticulous.

Description of Work
Trimmed and laced my big old ash tree. Great transaction. No wasted time, no aggravation, no sweat on my part. Totally made me happy, and now Tony is my tree guy!

He came out on July 4th because something was wrong with the sprinkler system, and it was flooding. The only way I could get it to stop was to turn off the water in the whole house. Because it was a holiday, I just wanted him to tell me what to do over the phone, but he insisted on coming out. Then, he didn't even charge me! He wouldn't accept money, so I gave him raspberry's and blueberry's with home made whipped cream. Carlos is excellent! I really didn't expect him to come out on a holiday! That was incredible.

Description of Work
I have used Tony's B C Tree Service, his name is Carlo. He installed a fence, and a sprinkler system in my back yard.

Tony came out to give me an estimate when it was convenient for me, checked everything I wanted done, made sure he understood just what I wanted and wrote a very clear work order. Tony explained each job and the cost for each for the total charge. Tony and his crew were there on time, did the work quickly, cleaned up everything, were very courteous and professional. Tony took his time explaining everything in the beginning and when all was finished, went around making sure things were completed to my satisfaction. The only reason I'm giving a ''B'' on the price is I'm a senior on a fixed income and, even with that, he and his crew are worth every dollar. I would definitely use this company in the future and wouldn't hesitate to refer him to anyone who needs the service, he and his company provide.

Description of Work
Trimmed and shaped two Cypress, a three sided hedge, removed an old Oak tree stump and roots, cleaned out, trimmed down and shaped a Carrot tree, a Ficus, trimmed the overgrowth of vines coming over my fence from the neighbors. Removed a Ficus and roots from the front of house. Removed the lower branches of an overgrown Monterey Pine and removed a rather large chunk of old cement, that had been lying around that I couldn't move.

This work took 1 1/2 days to complete. They arrived promptly at 7:00 a.m. with all the necessary equipment. The trees were shaped perfectly with all debris cleaned up expertly.

Description of Work
They trim 12 large trees in my front and back yards so they are shaped into a cube. They also removed two Cypress trees which had grown to over 50' feet high.

THE COMPANY HAULED AWAY ALL THE DEBRIS. THEY DID EXACTLY WHAT WAS NEEDED. THEY FINISHED BEFORE THEY SAID THEY WOULD. THEY WERE VERY EFFICIENT AND WORKED VERY QUICKLY.

THEY WERE VERY PROFESSIONAL, CLEAN AND RESPECTFUL. THEY CLEANED UP. THEY DID IT ALL IN ONE DAY. I DIDN'T EVEN KNOW THEY WERE HERE AFTER THEY FINISHED. THEY WERE VERY QUICK.

Description of Work
THEY PRUNED A VERY LARGE PEPPER TREE IN MY BACK YARD. THE PRUNES WERE SHREDDED, CLEANED AND HAULED AWAY.

Martinez Construction Services is a family-owned business, founded based on our passion for design and construction. At Martinez Construction, we are in this industry because we love what we do. We enjoy working with multidisciplinary teams and take pride in the ongoing relationships we have developed with our clients. LICENSE #907438. FREE ESTIMATES  …

With long-time ties to the community, Vision Outdoor Living is committed to being here before, during and after you purchase a new product or service from us. As licensed, bonded, and insured contractors, you can rest easy when having us do work for you! We guarantee your satisfaction!  …

How is Tony's B C Tree Service Inc overall rated?

Tony's B C Tree Service Inc is currently rated 5 overall out of 5.

What days are Tony's B C Tree Service Inc open?

No, Tony's B C Tree Service Inc does not offer eco-friendly accreditations.

What services does Tony's B C Tree Service Inc offer?